BACKYARD AREA, also known as FOREST OF STUMPS[1], is one of the many locations found within BLACK SPACE in OMORI. It is the fifth mandatory location the player must progress through to complete BLACK SPACE.

The BACKYARD AREA consists of a forested horizontal area resembling SUNNY's backyard. As you progress to the right, you repeatedly get called a liar, increasing in frequency each time. Interacting with any large character here will cause them to laugh at you.

The background is a jumbled mess of the album photos and disturbing drawings of SOMETHING. It also features images revealing memories of SUNNY and MARI's childhood in the past. If one looks closely, they can also see portraits of HEADSPACE MARI and photos revealing hints of how MARI died.

If the player waits for 143 seconds (SOMETHING saying "SUNNY... I love you" 15 times; 2 minutes and 23 seconds), after collecting the key, this will grant them the option to jump down the missing tiles. Doing so will lead to a short cutscene showing OMORI falling down for a few seconds. Afterwards, the OMORI is then warped to an area known as REMINA. From there, OMORI will have to walk up and interact with a distorted figure.

Doing so, will allow OMORI to gain access to THE DOCKS, one of the five primary BLACK SPACE 2 areas. This method can also be used to access the hidden location RED ROOM on the SUNNY ROUTE. When accessing the location, there will be strong distortion effects since OMORI isn't supposed to be there at this time. 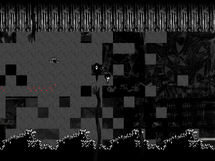 The area where Omori can wait for 143 seconds after collecting the key. Doing so will lead to a prompt that allows Omori to jump down. 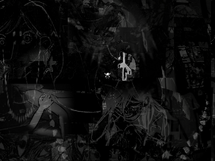 After jumping down, Omori is taken to the Remina area, an empty void with the background from the Backyard Area. From there, interact with the distorted figure up ahead. 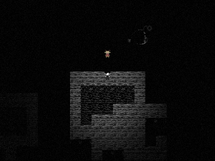 Omori finding himself within Water Walkway. Note the distortion effects blurring the player's vision as Omori isn't supposed to be there before resetting HEADSPACE.

After finding a BLACK KEY within the TOWN AREA, OMORI is warped back to the center hub of BLACK SPACE. From there, OMORI enters another door, which leads him to a monochrome forest filled with long rows of trees and creatures resembling MARI. STRANGER isn't here for unknown reasons. Unlike the other previous areas, OMORI cannot run here.

Regardless, OMORI can only walk to the other side of the room while hearing the creatures calling him a liar several times. When OMORI reaches the end of the area, he will find SOMETHING hovering over a tree stump. Interacting with SOMETHING causes it to follow him and spawn the key nearby. The only option left is to follow the newly-spawned red footprints that leads to the key's location.

While heading over to collect the key, the "liar" chants will then be replaced with SOMETHING professing their love for SUNNY until OMORI leaves the area. After collecting the key, several RED HANDS will spawn and interacting with them will take OMORI back to the center hub of BLACK SPACE.

A full view of the Backyard Area with no background. 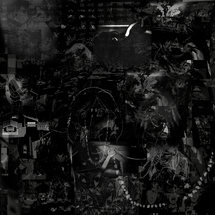 The background used for the Backyard Area.