BASIL'S HOUSE, also known as OLD SHOE[1], is the home of BASIL's HEADSPACE counterpart in OMORI. It can be found to the south of the FOREST PLAYGROUND, within the VAST FOREST.

During the PROLOGUE, OMORI and his friends travel to BASIL'S HOUSE to see his new seedlings. Outside of BASIL'S HOUSE, AUBREY and KEL get into a fight, which causes several pictures to be knocked out of BASIL'S PHOTO ALBUM. OMORI assists BASIL in fixing his album, after which a photo of a broken violin BASIL does not recognize falls out of the album. BASIL quickly begins to panic and OMORI is suddenly teleported into WHITE SPACE.

After returning to HEADSPACE, OMORI and his friends return to BASIL'S HOUSE only to find him missing, with nothing amiss but the formation of a small hole in the middle of the floor. As the plot progresses, the floor steadily begins to cave in and the surrounding plant life withers and dies. Upon winning the HANGMAN game, the floor will completely collapse and the pool of water around BASIL'S HOUSE will turn red. Jumping into the hole in the floor will allow OMORI to enter BLACK SPACE.

In the OMORI ROUTE, after BASIL has been rescued from BLACK SPACE, BASIL'S HOUSE will return to it's original form.

The map located south of FOREST PLAYGROUND is referred as the PATH TO BASIL[2] in the game's data. It contains a nearby stop for PLUTO'S SPACELINE and another pathway to VAST FOREST.

There are six flower patches made by BASIL himself that consists of a mechanic where the player can water BASIL's flowers every time they return to HEADSPACE. Watering them will grant boost in HP for any party member.

Over time, the flowers will decay gradually, due to BASIL being absent to take care of them.

It is recommended to water them every time the player returns to HEADSPACE for STAT boosts. The flowers located there are associated with all the main characters. The sunflowers represents BASIL, lily of the valley for MARI, gladiolus for AUBREY, roses for HERO, cactus for KEL, and lastly the tulip for SUNNY.

Watering any decayed flower associated with a party member will grant them more HP. However, OMORI can only gain hearts from the tulip, sunflower and the lily of the valley. Once OMORI and his friends enter HUMPHREY, however, the flowers can no longer be watered. 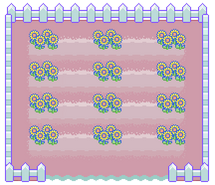 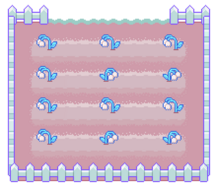 The Lily of the Valley Patch. 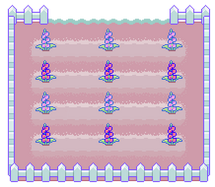 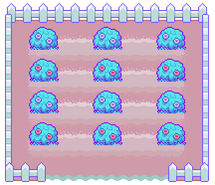 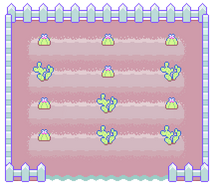 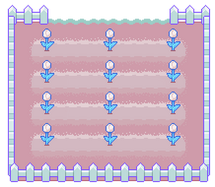 Entering the entrance to BASIL'S HOUSE will reveal an giant old shoe as his home. Inside of BASIL'S HOUSE contains his peaceful-designed room filled with plants and books. The group will first come here during the PROLOGUE to help BASIL fix his PHOTO ALBUM. If the group revisits the area after BASIL disappears, the house and its surrounding will slowly rot away, eventually revealing an entrance to BLACK SPACE after collecting all HANGMAN letters.

If the player pursues the OMORI ROUTE, then the house will revert back to its original state and now has four watermelons containing flower headbands representing each of OMORI's party members. 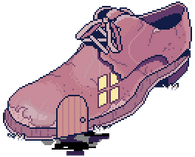 The Old Shoe rotting away from the influence of Black Space. 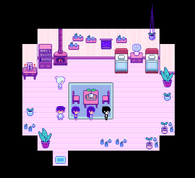 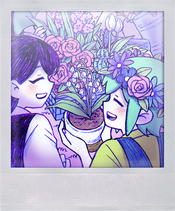