This page is about the main mandatory quest in-game. You may be looking for the character BASIL.

BASIL is a quest in OMORI. It is available after BASIL goes missing. This quest serves as the main quest and the overall driving force that gets the party to explore all corners of HEADSPACE.

After visiting BASIL'S HOUSE at the start of the game, BASIL goes missing and OMORI is forced into WHITE SPACE. He has no choice but to stab himself to awaken SUNNY, setting up the true premise of the game.

After SUNNY confronts and overcomes his fear of heights, he goes back to sleep. OMORI reunites with his friends, and begin their quest to find BASIL. Mari first proposes to check out the VAST FOREST. After finding no success in that and returning to the PLAYGROUND, OMORI and his friends decide to climb the high ladder to the OTHERWORLD.

After asking around OTHERWORLD, they get pointed to CAPT. SPACEBOY who might have a lead. However, he's stuck in a slump from his recent breakup with SWEETHEART, and so the party goes off to the JUNKYARD to find his SPECIAL MIXTAPE. They retrieve it, use it to awaken the depressed SPACE BOYFRIEND, and after they beat some sense into him, he admits that he hasn't seen BASIL anywhere in OTHERWORLD.

After talking to CAPT. SPACEBOY red footprints will appear. When arriving back at MARI's picnic she will ask the group how the search for BASIL is going. HERO will tell her that they made a detour to help people, AUBREY will show her SNO-CONE TICKET that she got and KEL will show off his new SKILL FLEX.

Wondering where BASIL could be, they make their way back to the ladder leading back to the VAST FOREST. The red footsteps continue on the way to the ladder. A BASIL shaped shadow will be standing to the left of the ladder and will go into the CATTAIL FIELD when approached.

Upon entering the CATTAIL FIELD, OMORI's friends won't be with him anymore. The area has changed significantly, as it's populated with objects hinting at vague memories with his friends. OMORI is guided to the previously-locked BARNHOUSE by a shadowy BASIL, which now has a red glow coming from within.

In the BARN OMORI sees the shadow walk into a large frame, and follows it inside to a long black hallway. It leads up to a family portrait, a music stand and the "F" KEY. Getting closer to the portrait will show a noose hanging above it.

Collecting the KEY will make a sheet of music appear on the music stand, but all the notes have been scribbled out. The Family portrait will also be defaced. With nowhere else to go, OMORI is forced to turn back and leave from where he entered, only for SOMETHING appear and chase him. When it catches him, a short sequence of disturbing images of the past will flash, before OMORI is forcibly returned to WHITE SPACE.

After returning to HEADSPACE, OMORI will be reunited with his friends. AUBREY tells him that they were worried about him, while KEL is very eager to continue the search for BASIL. After some more banter HERO proposes to go to MARI to tell her that OMORI is okay. At the PLAYGROUND, MARI gives OMORI a hug and tells him to stop disappearing. MARI bringing up BASIL causes them all to share how much they miss him. With that in mind MARI asks the group if there is a place they haven't checked yet.

HERO brings up PYREFLY FOREST to the west as a possible next top, even though he is afraid of spiders. With OMORI's fear of spiders overcome they make their way to the Forest.

While journeying through the Forest, they get sidetracked by SWEETHEART's show as they enter SPROUT MOLE VILLAGE. Things go awry as HERO is selected as SWEETHEART's perfect suitor against his will, and for their resistance, the party gets thrown into THE DUNGEON.

They eventually work their way out of captivity and almost escape SWEETHEART'S CASTLE, only to stumble into her wedding aisle at the last moment. After a hectic fight with SWEETHEART herself, CAPTAIN SPACEBOY shows up to tie the knot with her, and the two leave off on a honeymoon, leaving the party without any new headway in finding BASIL.

The stage where the wedding was held has been blown up, leaving a gaping hole that invites OMORI to dive in. It leads to the LOST LIBRARY, and as OMORI confronts the memory of his phobias, a side door he investigates almost leads him to BASIL. A brief glimpse of SOMETHING interrupts things and forces OMORI back into WHITE SPACE.

OMORI returns to HEADSPACE, this time without anyone accompanying him. He heads north after conquering his fear of drowning, and gets led into DEEP WELL to find and reunite with his friends. They have all somehow ended up signing contracts to work for MR. JAWSUM at LAST RESORT. OMORI rounds up his friends and reminds them of their quest to rescue BASIL, but on the way out they realize that they're slowly losing their memory of BASIL.

They cross over to the other side of the UNDERWATER HIGHWAY, but end up following the now-divorced SWEETHEART into DEEPER WELL and into HUMPHREY. By the time they enter HUMPHREY, they have largely forgotten about BASIL. The quest has vanished from the list, never to be completed proper.

Despite it being the overarching motivator for the party, this quest will never be completed. By the time the party reaches DEEPER WELL, they gradually lose their memories of what BASIL looked like, and the quest will vanish from the list. At this point in time, watering BASIL's flowers would have no effect. Once HUMPHREY is completed, the EMPTY HOUSE quest takes its place.

Omori standing in front of a music stand. 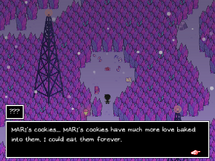 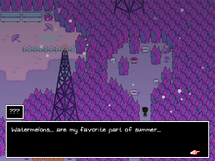 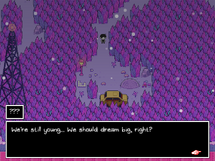 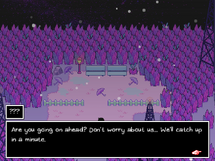 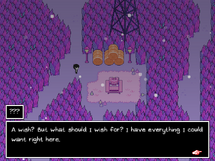 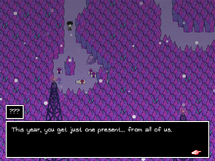 Basil staring at the stars.

Basil horrified by Something. 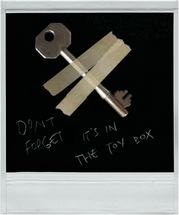