BEACH AREA, also known as SCRIBBLES[1], is one of the many locations found within BLACK SPACE in OMORI. It is the eighth mandatory location the player must progress through to complete BLACK SPACE. 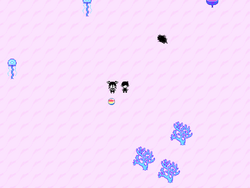 The BEACH AREA resembles the beach SUNNY and his friends once visited during the first day of summer, as seen from the MEMORY LANE. Most of the area is spread wide-open, allowing OMORI to explore its sandy floor while interacting with any photos lying on the ground. Touching the photos will cause them to be scribbled out, referencing the time when SUNNY used black marker on BASIL's PHOTO ALBUM. The ocean contains multiple fish heads that share the same design with FISHBOY'S CAVE from UNDERWATER HIGHWAY.

Other than STRANGER, there is only one NPC that can be interacted with, that being BLUEGIRL. She only appears if the player's WTF VALUE is set to greater than 6. Attempting to go near BLUEGIRL, who is walking slowly down south, will cause her to move away from OMORI. Talking to her will simply prompt her to tell OMORI to go away.

On ONE DAY LEFT, the area will suddenly be populated with the empty shells of the previous inhabitants of DEEPER WELL and TAKO, a beta character that'll cause the screen to briefly glitch upon interacting with her. This only happens if the player is on the OMORI ROUTE.

After finding a BLACK KEY within the WATERMELON AREA, OMORI is warped back to the center hub of BLACK SPACE. From there, OMORI enters another door, which leads him to a large brightly lit beach full of coral and beach balls. Photographs can be found on the ground and turn into scribbles when interacted with. OMORI continues forward and finds STRANGER staring ahead at the ocean. Talking to him is optional once again.

If interacted with, STRANGER will ask OMORI if they both can still call those who have suffered because of them friends. He adds on that no matter how hard he wants it, things can never be the same as before. Despite this, STRANGER wonders why a part of him continues to linger on, and ponders if there's any hope left for them while addressing OMORI as SUNNY. He then vanishes afterwards.

The key is located in the waters, north from the starting point. OMORI must interact with the ocean to swim in it and retrieve the key. After collecting the key, several RED HANDS will spawn and interacting with them will take OMORI back to the center hub of BLACK SPACE.

Upon returning there, a door with an ominous red light leading to the CHURCH OF SOMETHING appears right near the center hub. It is at this point OMORI can skip the other optional rooms and progress to the red door to finish the BLACK SPACE segments.

Exclusive to the OMORI ROUTE, accessing the secret entrance can be done once within NORTH LAKE after saving BASIL from BLACK SPACE and resetting HEADSPACE.

If the player interacts with the shell outside of the entrance to the DEEP WELL four times, enters the DEEP WELL ladder, then climbs back out, OMORI will be transported to the BEACH AREA.

From there, the empty shells of the DEEPER WELL residents (excluding HUMPHREY, BRANCH CORAL, VOID, and CIPHER) and a mysterious figure can be encountered.

A full view of the Beach Area with no background. 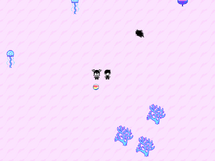 Tako as she appears in the Beach Area.

The multiple fish heads that appear throughout the area.