BERLY is a character and NPC in OMORI. She is one of the many residents of the FOREST PLAYGROUND, often trying to get the other children involved in her rowdy antics while hanging around VAN.

BERLY is a lizard/dinosaur-like creature, having plates that run from the top of her head to the end of her tail. She has green skin and black hair swept to the side. She wears a blue hoodie with pink shoes, and sports large, red glasses. Her overall appearance stems from her REAL WORLD counterpart KIM.

BERLY is characterized by her rowdy, standoffish behavior as she constantly tries getting others to join her antics. She usually has a tendency to grumble when she talks. She is quick to snap at others, shown when she kicks both MIKAL and KEL when they ignore role call after playing hide-and-seek. BERLY is especially boastful about her headbutting skills and often picks at others for her own amusement. Shown to be self-centered and confident, her language is rather immature and consists primarily of slang.

Despite her seemingly insensitive disposition, BERLY cares for the well-being of her friends, especially VAN. This is also shown when expressing concern for BASIL when he was held hostage by BOSS. She is capable of showing kindness and gratitude to those that she thinks rightfully deserve it, as seen through her teaching AUBREY her signature headbutt skill.

BERLY can be met initially in the FOREST PLAYGROUND as she is playing tetherball with VAN. After the group speaks with MARI and BASIL and attempts to leave the playground, BERLY will demand that OMORI's party play hide and seek with her and most of the playground residents. Before starting the game, she deems the person with the shortest straw given is the one who has to find the other participants, which turns out to be OMORI himself.

Upon finding almost all participants, BERLY is the last one found as she is easily discovered hiding in the sand with her straw poking out near the tetherball pole. She then gathers everyone up and initiates a roll-call to see which of one of them is still missing.

When BOSS is revealed to have captured BASIL, she declares to have been the one who banned him from playing due to his violent approach to the game, which involved body-slamming. BERLY also watches the group's brief scuffle with BOSS, who ends up being defeated thanks to OMORI's willpower to continue fighting. Afterwards, she resumes playing tetherball with VAN.

If OMORI's party returns to the playground after BASIL's disappearance, the tetherball will be missing due to VAN hitting it too hard with his arms. The player can then initiate one of the first optional sidequests to retrieve it. If the quest is started, BERLY will temporarily join OMORI'S party until the ball is found.

After the group completes the sidequest, BERLY will teach AUBREY the HEADBUTT skill using VAN as a target, and gives her a BUTT CERTIFICATE as a token of gratitude. AUBREY can also gain an additional 50 JUICE by talking to BERLY and using her bat to smash VAN after learning the tag mechanic at the JUNKYARD.

BERLY, along with everyone else in playground, got tricked into signing a contract with MR. JAWSUM and began working at LAST RESORT. She was made the head of security after her friend, VAN, was deemed not serious enough for the job.

She can be first found guarding the elevator to the CONCIERGE on the fifth floor alongside two GATOR GUYS. She initially disallows the group to pass through due to taking her job as a bouncer very seriously. Giving BERLY BOTTLED WATER prompts her to allow the group to pass, while telling the GATOR GUYS that there is pizza in the break room as they leave.

Interacting with her in the basement after defeating both MR. JAWSUM and PLUTO (EXPANDED) initiates the CALL OF INSPIRATION quest, in which BERLY desires to create the "ultimate weapon" for the group. To complete the sidequest, the party must speak to the mailbox outside the hotel. Bribing it continuously will cause it to give the group a POOL NOODLE for free. Giving the weapon to BERLY will complete the quest, granting the player the COOL NOODLE, an equippable weapon for AUBREY.

After saving BASIL within BLACK SPACE and resetting HEADSPACE back to its original state on the OMORI ROUTE, the group can return to the LAST RESORT once again.

BERLY is still located within B1 of the casino when returning to the area. After speaking to MR. JAWSUM for the last time, HERO becomes the new owner of the casino as the former retires. This will lead to many of the casino's workers and visitors leaving the place.

BERLY and the other playground residents soon return to their place at the VAST FOREST. She can be seen playing tetherball with VAN like they usually do. Interacting with either her or VAN will prompt the same dialogue mentioned in the previous segments.

Berly thinking of an idea. 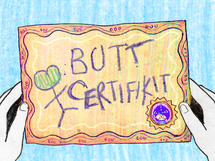 The Butt Certificate as it appears in the 2018 demo. 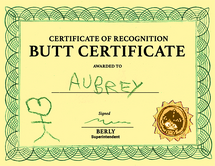 Berly on the Butt Certificate in the final game. 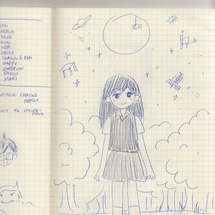 Berly in one of the concept arts.