500
BIG STRONG TREE is an enemy in OMORI. It can be found in VAST FOREST posing as an ordinary tree, specifically stationed within VAST FOREST WEST.

Apart from a few pixels on it's overworld sprite, BIG STRONG TREE looks identical to every other tree in VAST FOREST. It can be identified as an enemy due to briefly turning transparent when the party flees from a battle.

The tree deals no attack damage but its defense is practically infinite, and it is unable to feel EMOTIONS. Damaging it almost always requires critical hits or attacks which ignore defense. Certain attacks and items will deal damage to the tree:

Party members can be equipped with LUCK-increasing charms to raise the chance of critical hits. HERO and KEL's JUICE-restoring skills are also useful in case any party members run out. 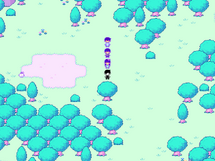 The Big Strong Tree's location
(Notice the few additional pixels on its sprite compared to the other trees).