The BORING ROOM, also known as the LAMP ROOM[1], is a recurring hidden location in OMORI. It is a plain room that seems to resemble SUNNY's living room with a few additional features and a peaceful atmosphere.

As its name suggests, the BORING ROOM is a small room that largely resembles the living room from SUNNY'S HOUSE. There is not much to see there but a few objects that stand out. Various portraits are hung up on the wall, most notably a large portrait of SUNNY's family.

Near the portraits is a large chair OMORI and SUNNY can sit on. A lamp is placed next to the chair along with a ceiling fan mounted on the ceiling. The walls also share the same wallpaper that SUNNY'S HOUSE uses. Other than that, there is not much to do but simply enjoy the peaceful atmosphere of the mysterious room.

Note that when sitting down on the chair on both routes, a small event will play out as OMORI or SUNNY silently place themselves on the chair. Occasionally, the text box will read SUNNY's peaceful thoughts about the room. Pressing any key will stop the quiet sequence and allow the player to regain control of the player character. This room is implied to represent SUNNY's thoughts of longing for a life where nothing went wrong.

The BORING ROOM first appears during the CHURCH OF SOMETHING segment when OMORI enters SOMETHING to rescue BASIL within BLACK SPACE. This version is known as the LAMP ROOM, and is notably darkened with an ominous red light shining through the door.

From there, BASIL tries to inform OMORI about something, only to get dragged deeper into the darkness by multiple RED HANDS. There is nothing else to do but to enter RED SPACE. One thing to note is that you can inspect the lamp, which is revealed to be lacking a LIGHT BULB. Other than that, there is much to do on the first visit. 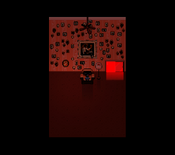 SUNNY later enters the LAMP ROOM himself during THE TRUTH segment. The room is still darkened but once SUNNY places the LIGHT BULB he obtained after defeating SOMETHING, the room will be slightly illuminated. One of the photos for the PHOTO ALBUM appears in the center of the room. Collect it and the entire room will finally be illuminated but the BGM playing before comes to a sudden stop.

The LAMP ROOM is now distorted and unsettling, complete with the portraits all covered with red and black colors. The ominous red light from before still shines through the room, even after the door opens by itself to the final area of THE TRUTH segment. From there, SUNNY can gaze into the mirror, which reveals a close-up of his bloodied, mutilated form. This most likely represents him viewing himself as a monster for killing MARI.

He can also set himself on the chair. Resting there for a few seconds will change the setting to a shot of a more peaceful LAMP ROOM, contrasting the one SUNNY is in at the moment. Some of his thoughts about the room will appear through a text box.

Once you stop the short-lived sequence, the only thing left to do is to leave the room behind and confront the truth. It is also notable in the game's data that before obtaining the photo, a brief vision of BASIL'S SOMETHING can be seen on the bottom corner of the room.

The BORING ROOM can only be accessed if OMORI accepts ownership of SWEETHEART'S CASTLE from the KEEPER OF THE CASTLE on ONE DAY LEFT. Doing so will completely erase everything inside of the castle, including ROCOCO, the LOST LIBRARY, and THE DUNGEON, replacing the castle's entrance with a peaceful living room. This will also yield the Welcome Home achievement.

In contrast to the one featured before, the BORING ROOM is devoid of the horror elements seen before and can serve as a place where OMORI can take a break occasionally. It notably appears to be lacking a mirror but still retains its previous features. The only thing you can do is let OMORI rest on the chair, which leads to a similar sequence shown in THE TRUTH segment. 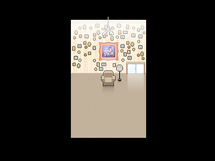 Full map of the Boring Room. 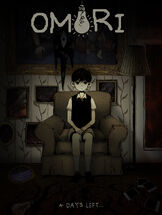 The Boring Room as it appears in a countdown teaser for the game.

The Artist's rendition of the Boring Room.