BOSS is a character and the first boss in OMORI. He is FOREST PLAYGROUND's local bully who often harasses others for his own amusement. He later appears as a minor NPC in the same location and later HUMPHREY on ONE DAY LEFT of the OMORI ROUTE.

BOSS appears to be a giant purple rhinoceros figure with two green horns on the front of his face, pointing upwards. His overall attire consists of him wearing blue overalls with two straps that extend down to his toes. He usually wears an angry expression on his face. Compared to the other playground residents, BOSS towers above most of them in size. The only exceptions consist of VAN and SHARLEEN.

Known as the FOREST PLAYGROUND's resident bully, BOSS appears to enjoy harassing others for his own amusement. He also is shown to be rather rough towards those he interacts with. This is notable with his idea of hide-and-seek involving body-slamming, which explains why he was banned from the playground by BERLY.[1]

Despite his negative traits, he is mostly shown to be a caring individual despite being known as a local bully for the playground residents. It's also mentioned that although he used BASIL as a hostage, BOSS made sure the young boy wasn't injured during his fight with party. On the top of that, BOSS expresses concern over BASIL's wellbeing when the latter disappears throughout the game.[2]

BOSS eventually reflects on his previous actions, and decides to turn over a new leaf by creating the BOSS RUSH attraction inside of HUMPHREY for OMORI and friends to challenge. He even cheers for the party and congratulates them whenever they earn a trophy from his attraction.[3][4] 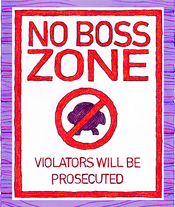 BOSS is first encountered after playing hide and seek, where he is seen holding BASIL hostage. The party tries to convince BOSS to give BASIL back, but he refuses and initiates a fight. Upon being defeated, he lets go of BASIL and stays within his spot behind a fake cutout of a tree. From the player can interact with him as a regular NPC for the remainder of the PROLOGUE segment.

The next day, BOSS will still remain in his spot behind the fake cutout of a tree. Speaking to him will prompt him to tell the party that he doesn't know the missing BASIL's whereabouts while showing genuine concern for the flower boy's well-being.

On TWO DAYS LEFT, BOSS appears to have strangely disappeared from his hiding spot. It is revealed that almost all of the playground's residents have been tricked into working for MR. JAWSUM at the LAST RESORT by signing CONTRACTS. However, he doesn't show up at the casino for unknown reasons.

After saving BASIL from BLACK SPACE and resetting HEADSPACE, BOSS can be encountered again in the OMORI ROUTE, now running the BOSS RUSH challenge located inside of HUMPHREY. Talking to him will activate a teleporter, allowing the player to initiate the BOSS RUSH challenge. He will occasionally give the party advice while cheering them on whenever they earn trophies for his attraction.

*Despite showing the same message as the previous skill, they are different.

**This skill always deals 100 points of damage with no variance rate, regardless of the foe's DEFENSE. It is used once when BOSS' HEART reaches 10% or lower and will not consume an action.

*This is the variant that hits twice.

**Once BOSS' HEART reaches 15% or lower, this skill will be moved to the top of the list, ensuring that it is always used.

***This skill always deals 100 points of damage with no variance rate, regardless of the foe's DEFENSE. It is used once when BOSS' HEART reaches 10% or lower and will not consume an action.