BREAVEN, sometimes referred to as DOUGH DUNGEON, is a location within ORANGE OASIS in OMORI. It is an underground dungeon where the UNBREAD TWINS continuously create endless amounts of breads and delicious treats, and have been doing so since the inception of the universe.

BREAVEN is an underground dungeon featuring endless loads of delicious treats surrounding its various subareas. Like with the other ORANGE OASIS areas, BREAVEN is optional to complete, though it is required to access if one wants to finish the FOE FACTS! journal for an achievement. The only way to access BREAVEN is by taking the east exit from ORANGE OASIS.

By following the path to its end, the player will first find themselves in an area filled with bread. The ANCIENT CODE from DINO'S DIG will easily provide the solution to unlock access to BREAVEN by causing one the bread slices to dislodge themselves and reveal a ladder going downwards. Going down this ladder will lead into a partially-flooded room that can only be fully navigated if OMORI conquers his fears of drowning on TWO DAYS LEFT.

The first area of the BREAVEN is known as the DOOM ENTRANCE. It is a secret chamber in which you must swim across the small lake to progress. If OMORI has already conquered his fear of drowning as of TWO DAYS LEFT as mentioned before, he will be able to swim across and access the rest of BREAVEN.

The player then can interact with a giant piece of toast with a big sign indicating that you shouldn't. Doing so will result in the room shaking slightly with two ominous voices chanting "Ohoooooooo...." in the background. Shortly afterwards, the toast will begin floating, and the party falls through a large hole in the ground. This will bring them to second subarea.

After touching the large piece of toast, the party will now be in the SUMMONING CIRCLE MAP, which first features a walkway lit by candles. They are covered in flour due to their fall. After walking down the hall and encountering a large summoning circle guarded by ACTUAL MOLE, the player can sacrifice various items laid out on a table to the circle, each of which trigger different effects. Finishing these encounters will reveal the password for the safe on the table:

ACTUAL MOLE can be spoken to and used to leave the tunnel if needed. With all sacrifices made, there will be a code written on the countertop: "7201969". Use it on the golden safe on the top-left corner, even when ACTUAL MOLE insists that the party shouldn't. This allows access to a RECIPE 4 DISASTER, and if the player takes and views it, they'll see the image of ACTUAL MOLE. Thus, the player must sacrifice ACTUAL MOLE to open up a portal. Stepping into the portal will transport the party into the next room.

After defeating the UNBREAD TWINS, the party can revisit the summoning circle by sinking into the pitfall where the ladder once was. The ACTUAL MOLE will be replaced by his ghost, who cannot be sacrificed to activate the summoning circle again but will still provide passage back to the surface.

The ROLLING STONE MAP consists of a long, narrow corridor, and the only way to progress is to go down. A large boulder will then fall from the ceiling, steadily rolling down after the party.

Regardless of whether the team is struck by the boulder or falls into the pit, the screen will turn black. This will also reveal the text "You died" with a funeral song playing in the background. Instead of receiving a GAME OVER screen as usual upon death, the party will appear a room full of bread and LIFE JAM.

One thing to note is that the skeletons that appear within this area bear an eerily resemblance to OMORI and party, similar to the ones found in the TORTURE ROOM and THE ABYSS. 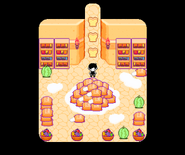 The PANTRY is a series of three rooms that mostly contains baking stuff. The room that the party appears in features loads of bread and LIFE JAM. OMORI, the sole survivor of the incident, can use the three LIFE JAMS to turn the TOAST in the room back into his friends, ultimately reviving them. From there, the party can leave the room to enter a hub in which the player can heal up and save before facing the boss of this area. From the center hub, there are two extra rooms that can be accessed from the hub. 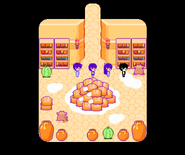 The middle room features large jars of honey lying around. Two ACTUAL MOLES can be seen wandering around the area. This area also has large jars of honey lying around. The two watermelons located there contain a BREAD and WAFFLE. The one on the top corner will call the party intruders will telling them to leave. The bottom ACTUAL MOLE will reveal that their masters BISCUIT and DOUGHIE do not sleep, as neither do they. 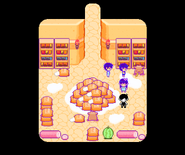 The right room features a few sweet rolls lying around. The watermelon in that area contains a DONUT. Like with the middle room, there are two ACTUAL MOLES residing there. The top ACTUAL MOLE will tell the party that they smell like their father, while wondering if he's still alive. They also reveal that their father hasn't been seen in a while. The bottom ACTUAL MOLE will reveal that BISCUIT and DOUGHIE have been receiving endless amounts of requests, noting that they are reaching their limit soon.

After defeating the UNBREAD TWINS, the player can come back to the two extra PANTRY rooms for extra dialogue from the ACTUAL MOLES. Most of them will express missing their masters while some reveal that they intend to make the BREAVEN their own home.

The BAKING ROOM is where the UNBREAD TWINS, consisting of BISCUIT and DOUGHIE, are seen making bread with equally bored expressions, humming to themselves as they work. The UNBREAD TWINS see the group and are afraid that their BREAD has come to haunt them, attacking in fear. Whether the twins are defeated or not, the game progresses and they decide, via the persuasion of the group, to stop their endless cycle of making bread and enter the world outside through a portal. However, if the player manages to defeat them, this will yield the Ohoooooooooo... achievement.

There is nothing else to do but exit through the same portal the UNBREAD TWINS used before. However, there are a few things left for the party to do but all are optional. Interacting with the objects in the BAKING ROOM will show the text Holy kitchen. Going back into the two PANTRY rooms and interacting with the ACTUAL MOLES there will prompt new dialogue from them.

Finishing this room will ultimately end the BREAVEN segments and by extension, render the other areas (excluding the SUMMONING CIRCLE MAP) inaccessible once the player leaves the room. Doing so will transport the party back to the TOAST GRAVEYARD. The BREADPHONES charm are sitting on a nearby grave and can be picked up.

Full map of the Doom Entrance. 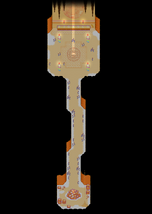 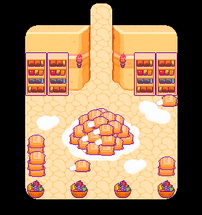 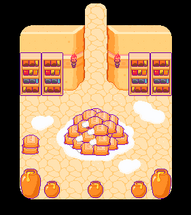 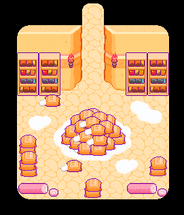 Full map of the Baking Room.

The screen that appears either when falling down the hole or getting crushed by the boulder.

The large toast that appears in the Doom Entrance.

The painting that appears in the Summoning Circle Map.

The boulder that appears in the Rolling Stone Map.

Omori's sprite when covered with flour.

Aubrey's sprite when covered with flour.

Kel's sprite when covered with flour.

Hero's sprite when covered with flour.