Orchard (Mountain)
Temple (Church)
CHURCH OF SOMETHING, originally known as TEMPLE[1], is a location in OMORI. This location serves as the final mandatory area of BLACK SPACE in both routes of the game.

The CHURCH OF SOMETHING greatly resembles a mix of SUNNY'S HOUSE and the CHURCH from FARAWAY TOWN. 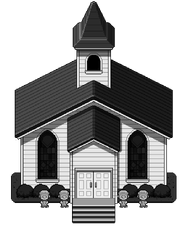 This location serves as the final segment of BLACK SPACE as OMORI can no longer suppress the truth behind MARI's death to protect SUNNY. The exterior SNOWY HILLS[2] is snow-covered path featuring remnants of SUNNY's long forgotten memories. There are various shadowy blobs resembling SOMETHING located near the stairs and silhouettes of red hands as well. A gigantic version of BASIL's SOMETHING can be seen in the background.

The interior of the church is entirely monochrome but bears a resemblance to the FARAWAY TOWN version. The only difference is that there are some SCRIBBLES occupying the benches and the pillars are wrapped in vines. At the very end of the path is another stairway leading to BASIL, STRANGER, and SOMETHING all waiting for OMORI.

Upon completing a specific number of doors, OMORI enters a door emitting red light. From there, he reaches a snowy mountain and wanders around until discovering a large monochrome church. He then enters the CHURCH of SOMETHING after obtaining the final black key. He also picks up BASIL's flower crown at the door's entrance if the player is on the OMORI ROUTE. Upon entering the church, OMORI locates BASIL entangled by his SOMETHING and STRANGER confronts the former, with the outcome depending on which route the player takes.

STRANGER tells "SUNNY" that now it's time to face the truth together and disappears once more. BASIL questions "SUNNY" why did things have to turn out this way and begs for forgiveness. However, the darkness absorbs BASIL and OMORI decides to follow him as well.

Upon entering BASIL's SOMETHING, OMORI finds himself inside of a strange dark room, where BASIL stands next a red window. BASIL notices that something's out there, noting that its calling both him and OMORI. After conversing briefly, the window opens and several RED HANDS emerge to grab BASIL, dragging him away further into the darkness.

OMORI follows them and enters an eldritch location known as RED SPACE. OMORI ventures through the location and finds BASIL restrained by four RED HANDS. BASIL begs for forgiveness but OMORI doesn't respond. Knowing that BASIL has learned too much about the truth behind MARI's death, OMORI refuses to let him go.

OMORI then commands the hands to lower BASIL down and proceeds to stab him, killing him in the process. He coldly walks over BASIL's corpse and ascends the stairs, reaching his throne of hands. OMORI sets himself on his throne, turning around to look at the screen as he becomes more distorted than before. This ends the HEADSPACE segments as SUNNY wakes up.

Upon reaching the church, OMORI finds BASIL trapped by his SOMETHING. BASIL awakens and expresses relief at seeing OMORI coming to rescue him. OMORI then frees BASIL by using his knife and two prepare to leave the location. However, STRANGER appears before them, telling "SUNNY" that he refuses to let him suppress the truth and repeating his endless cycle of dreaming. STRANGER disappears, leading to BASIL's SOMETHING fully materializing. The shadowy abomination then lunges at OMORI.

It is possible for the player to attempt to run away from BASIL's SOMETHING, doing so will lead to a chase sequence where OMORI narrowly tries to outrun the shadowy abomination. Either way, BASIL's SOMETHING will catch OMORI and the screen will distort.

SUNNY awakens and finds himself in an unknown room, where STRANGER and BASIL's SOMETHING await him. STRANGER tells SUNNY to face the consequences of his past sins and fights him. SUNNY attempts to fight back but isn't able to withstand the shadowy figure's presence. A weakened SUNNY ends up getting warped to RED SPACE and slowly succumbs to his self guilt and hatred.

OMORI witnesses SUNNY struggling on his throne, and descends down the stairs to help his original self endure STRANGER's wrath. However, upon confronting the STRANGER once again, it appears that he has given up on trying to convince SUNNY to stop his unhealthy coping mechanism. OMORI is then warped back to BLACK SPACE by a nearby RED HAND, allowing him to rescue BASIL and escape back to HEADSPACE.

A full view of the Snowy Hills with no background.

The full view of the Church of Something.

The full view of the map used when Basil's Something chases down Omori. 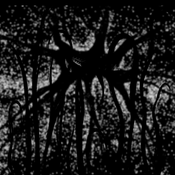 The background used for the Church of Something.

Basil trapped by his Something
(Sunny Route)

Basil trapped by his Something
(Omori Route)

Sunny awakening in Black Space during his fight against Stranger in the Omori Route.