Gator Gambol
CLUB SANDWICH is a recurring bonus location in OMORI. It is a series of local bar joints owned by both HOAGIE and REUBEN, accessed after completing the LAST RESORT segment on TWO DAYS LEFT for both routes of the game.

A CLUB SANDWICH location is a bar joint that many denizens in HEADSPACE go visit whenever they need to refresh themselves. The two owners of the place, HOAGIE and REUBEN, built these joints from the start of their partnership. Over time, more patrons from different areas of HEADSPACE began to come there to relax.[1]

The entrances of these areas are often marked by golden doors with a large hero sandwich as the emblem. Approaching these doors denies you entry as you don't know the password to get in.[2] It's only after you defeat MR. JAWSUM where HERO gains the ability to let the party in, as he's learned the password during his time working at LAST RESORT.[3]

There are various things the group can do within the CLUB SANDWICH areas. For all areas, talking to REUBEN for a certain number of times will reward the group with GRAPE SODA as the latter cannot serve FRUIT JUICE to minors.[4]

Interacting with the sparkling drinks gives the party an option to lounge there. This will restore everyone's HEART and JUICE, as well as gaining a permanent 5 max JUICE boost on the first lounge in each branch. The jukebox there can play songs from CDS obtained in FARAWAY TOWN. This can only work if the player has already placed a certain CD in GINO's jukebox in the real world.

Once HERO returns to the group after defeating both MR. JAWSUM and PLUTO at the LAST RESORT, the group resumes their search for BASIL. In addition, the group can now access the golden doors now that HERO has learned the password offscreen at the casino from MR. JAWSUM. When interacting with one of the golden doors with HERO tagged as the leader, the owner of the place allows them to enter the joint.

There are four branches to CLUB SANDWICH -- 1F of LAST RESORT, behind a moonwalk dance floor in OTHERWORLD, behind a waterfall in PYREFLY FOREST, and on the east side of ORANGE OASIS. Inside are HOAGIE and REUBEN, who both run CLUB SANDWICH. Lounging with your friends restores juice and health, and everyone gains 5 max JUICE on the first lounge in each branch. Depending on where you access it from, there are other various characters inside, other than HOAGIE and REUBEN, both of whom appear in all areas.

Found within OTHERWORLD LAKE, next to one of the telescopes. The NPCs found inside this CLUB SANDWICH consist of EMS, multiple SPACE PIRATES, and THE EARTH.

Note that if the player hasn't defeated THE EARTH before TWO DAYS LEFT, then the aforementioned planet and four SPACE PIRATES will appear within this area. They will disappear on ONE DAY LEFT of the OMORI ROUTE, leaving only EMS and a lone SPACE PIRATE as the remaining NPCs there other than the two owners.

The location of Otherworld's Club Sandwich, found within Otherworld Lake.

The Moonwalk Map, serving as the entrance. 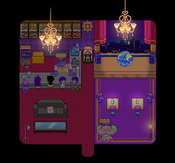 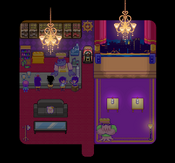 Found behind a waterfall in PYREFLY V. This can only be accessed once OMORI has conquered his fear of drowning on TWO DAYS LEFT and acquired the password through HERO. The NPCs found inside this CLUB SANDWICH consist of RAREST BEAR, a SPROUT MOLE, ROSA, and SIR MAXIMUS IV.

Note that ROSA and the single SPROUT MOLE will only appear if the player has already completed the PESSI'S THING sidequest within SPROUT MOLE VILLAGE after using BLACKMAIL on the pompous SPROUT MOLE. 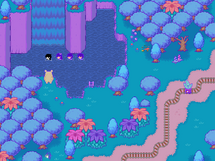 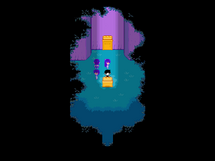 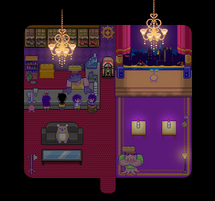 Found northeast of the area's CENTER HUB, next to WEE CACTUS, a CUPCAKE BUNNY, and a watermelon holding BREADFRUIT JUICE. The NPCs found inside this CLUB SANDWICH consist of a GATOR GUY, IZZY, and BREEZY.

If the player has defeated the UNBREAD TWINS within the BREAVEN, PAPA CHIP, SLICE, SESAME, and SOURDOUGH will all show up at the location to relax. The lone GATOR GUY vanishes from the area due to being called back to LAST RESORT under orders of MR. JAWSUM. 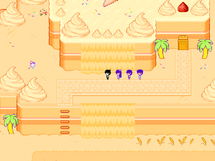 The location of Orange Oasis's Club Sandwich, found northeast of the center hub. 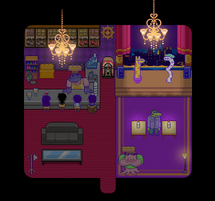 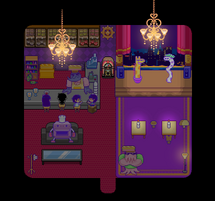 Found at the top right corner of the casino's 1F. It is located next to CESAR, BAFINO, and a GOOMAN. The NPCs found inside this CLUB SANDWICH consist of SPROUT MOLE MIKE, two GATOR GUYS, and MR. SCAREBRO.

Note that if you talk to MR. SCAREBRO with HERO as the party leader, he will dare HERO to strike him. Take up this offer a couple of times, and HERO will awaken to a newfound willingness to assert himself, giving him a permanent boost of 20 ATTACK points. 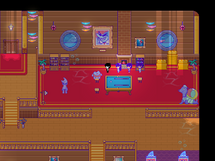 The location of Last Resort's Club Sandwich, found within 1F. 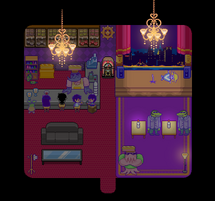 GRAPE SODA (Talking to REUBEN for a certain amount of times; applies to all locations) 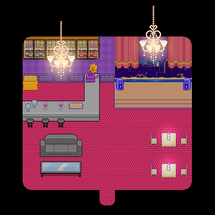 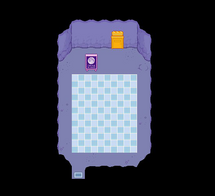 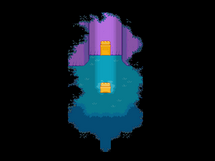 Omori's animation when lounging in a Club Sandwich location.

Aubrey's animation when lounging in a Club Sandwich location.

Kel's animation when lounging in a Club Sandwich location.

Hero's animation when lounging in a Club Sandwich location.