'X' Marks The Spot! (BACKGROUND)
An Archaeic Resonance (FLOORS)
Those Who Forget History (BATTLE)
DINO'S DIG is a location in OMORI. It is ORANGE OASIS's main attraction run by DINO and his dinosaur friends, where participants can collect various items by using a SPOON to dig them out.

DINO'S DIG mechanics are explained to the player up-front when they first visit, and costs 100 CLAMS to enter. The player is given a SPOON and can use it to dig up at digging spots around the pyramid. Certain digging spots have fixed one-time loot, while others will draw from a pool of usable items or DINO DOLLARS. Each SPOON has a limited number of uses, and the player is ejected once the SPOON is completely used up. DINO DOLLARS can only be exchanged for better SPOONS at the exchange counter to the left of the DIG entrance.

If you're lucky, you can dig up a PYRAMID KEY. This lets you unlock the door at the top of the floor and ascend to then next level. There are a total of four levels in the pyramid, each one holding more valuable loot than the previous. The enemies here, however, are pretty powerful. It is recommended that you be at least level 25 to not get defeated by them. If you can defeat the enemies with ease, they yield large amounts of EXP and CLAMS -- more than enough to cover the entry fee. 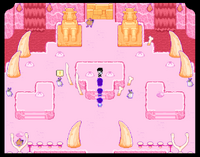 Repeated runs through DINO'S DIG can let the party rapidly gain levels until they unlock their best skills, and stock up powerful recovery items for tough fights. The top level has 5 possible spots for digging and contains a CHICKEN?. The CHICKEN? must be defeated before it runs away as it will not reappear, causing the CHICKEN BALL and its achievement to be lost.

If the player returns here on ONE DAY LEFT of the OMORI ROUTE to play another minigame, DINO will reveal that all enemies found in each floor of the FOOD PYRAMID have higher amounts of EXP. This can be useful for grinding and maxing out the party's level and stats in preparation for fighting the optional bosses exclusive to that route.

For every floor of DINO'S DIG, there are varying chances of obtaining a specific item, depending on a random output in the game's data. The common event ★ DINO DIG will also determine the item a player can obtain when digging a random hole in one of the floors once the player begins the minigame. These events consist of Common (65% chance), Uncommon (25% chance), and Rare (10% chance).

Note that it is possible to obtain both a snack and DINO DOLLAR at the same time on this floor when the 1F Common event is activated. If this happens, the text always shows that you get a DINO DOLLAR.

However, there is an exception when obtaining two DINO DOLLARS, in which the text will always show that you get one DINO DOLLAR if that happens. This is likely an oversight left by the developers.

The lobby room is the first subarea of DINO'S DIG. It features various NPCs, such as DINO, the main host/founder of the attraction, and CHAD, who describes the features of the FOOD PYRAMID. The left side of the lobby room features the DINO SHOP and SCOTT's bottom, which can be interacted with to complete the ITCHY sidequest. The DINO SHOP is where visitors can buy three different types of SPOONS for digging out more items:

The right side of the lobby room features a total of eight strange artifacts from different areas of HEADSPACE. Some of these include a pink-colored flower from VAST FOREST, an inactive DOOMBOX from OTHERWORLD, and a SPROUT MOLE's corpse from PYREFLY FOREST. Other than that, nothing of importance is shown on that side of the room.

The first floor of the FOOD PYRAMID is known as the EXCAVATION SITE (GRAINS) in the game's data. It serves as the starting point of the minigame hosted by DINO. When the party enters here for the first time, DINO will explain to them the basics of DINO'S DIG and the overall mechanics behind it. He will also give the player a POTATO SPOON (allows for a total of five digs) for any run, only if they don't have other SPOONs to dig up more digging spots.

The floor also contains a PYRAMID KEY that is hidden randomly throughout the area. The enemies featured in the area consist of PORCUPIE, BUN BUNNY, and S.S. SNAKE. The player must be precise in taking down these enemies as they all deal heavy damage to the party if they aren't prepared or underleveled.

The most important items the player can obtain here consists of the ANCIENT CODE and HECTOR JR. The ANCIENT CODE can be found in the upper corner of the room, surrounded by three TOAST gravestones. It can be used to uncover the password for opening the hidden entrance to the BREAVEN dungeon found beneath the TOAST GRAVEYARD.

KEL's missing PET ROCK HECTOR can be found in the top right corner of the room. Upon digging up the patch from there, this will lead to a short cutscene of KEL reuniting with HECTOR. It is revealed that HECTOR now has a family and will not join KEL again on his adventure. However, HECTOR's son HECTOR JR decides to join the group as a charm that can be equipped. Doing this action will also complete the HECTOR sidequest.

The second floor of the FOOD PYRAMID is known as the EXCAVATION SITE (FRUITS & VEGETABLES) in the game's data. Like with the first floor, this area contains more items that can be obtained at any random digging spot. The floor also contains a PYRAMID KEY that is hidden randomly throughout the area. There are also more enemies based on the area's motif, consisting of CELERY, GINGER, CILANTRO, and SPROUT BUNNY. All enemies here can be quite tricky to defeat, requiring precise strategy and skill technique.

This is also where the player can find ORAGNE JOE, the missing brother of ORANGE JOE. This can only done if the player has already accepted ORANGE JOE's optional sidequest within ORANGE JOE'S CLIFF. To do so, the group must move across the bridge in the middle of the room.

Doing so will bring them to ORAGNE JOE, whose body is buried right beside a few oranges. This will lead to a long cutscene involving the two brothers reuniting, as well as obtaining a LIFE JAM from both of them. Completing the sidequest yields the "Hope and Vigor!" achievement.

Other than that, many of the items found here are useful for restoring the party's HEART and JUICE as they continue further into the pyramid. A GLASS BOTTLE can also be dug up from here.

The third floor of the FOOD PYRAMID is known as the EXCAVATION SITE (MEAT) in the game's data. This area features two new unique enemies: RABBIT? and CHICKEN?. Both are only featured in the third and top floors.

The player must beware of fighting the RABBIT? enemies as they are much stronger than the average bunny enemy and can deal huge chunks of damage to any party member if they aren't prepared enough. The CHICKEN? enemies, however, are much simpler to defeat but most of the time will attempt to flee whenever the party tries approaching it.

Despite this, both enemies will drop the highest amounts of EXP out of all enemies found within the FOOD PYRAMID. The most important items the player can find here are the THANK-YOU FOSSIL, which is necessary to complete the PRESENT FOR PALMIE sidequest given by JELLY in OASIS INTERIORS, and the X Letter for the HANGMAN.

The fourth floor of the FOOD PYRAMID is known as the EXCAVATION SITE (DESSERT) in the game's data. It serves as the final area for the minigame as a whole. It is also features several items that heal and recover a ton of a party member's HEART and JUICE. Notably, a single CHICKEN? can be found wandering around the area.

Unlike the other two CHICKEN? enemies found on the previous floor, this one yields more experience and can only be fought once as it never respawns upon encountering it in battle. Defeating the CHICKEN? found here is necessary to obtain the CHICKEN BALL weapon as well as the achievement Ain't nobody here but us chickens.

If it flees immediately when starting the battle, then you'll essentially lose the CHICKEN BALL and its associated achievement unless you reload a save file. For more tips on how to counter this enemy on the top floor, see the enemy's strategy page.

CHICKEN BALL
(Dropped upon defeating the CHICKEN? there)

A poster of the attraction found in the Forest Playground (After defeating Humphrey on the Omori Route). 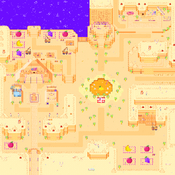 Dino's Dig featured on the full map of Orange Oasis.

Full map of the Lobby Room. 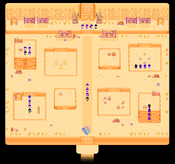 Full map of the first floor.

Full map of the second floor. 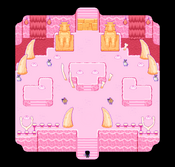 Full map of the third floor.

Full map of the fourth floor.

An early version of Dino's Dig from the 2017 trailer.