DONUT HOUSE is a location in OMORI. This home houses a family of sentient donuts, consisting of the three DONUT GRANDMAS and DONUT HOLE. 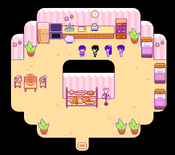 The DONUT HOUSE is where a family of four sentient DONUTS reside. Its interior mainly consists of various breads and donut aesthetics. There are only a few interesting things for the player to discover. It is implied that the duchess SWEETHEART was raised there before moving to the wilderness of PYREFLY FOREST.

The player can also interact with the other two DONUT GRANDMAS and DONUT HOLE. Those NPCs have nothing interesting to say other than speaking one line of dialogue. 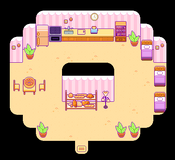 Full map of the Donut House.

The poster found by interacting with the bookshelf.