FARAWAY CEMETERY is a location in OMORI. This is where the deceased are buried to rest in peace, including MARI when she died four years ago in the past.

FARAWAY CEMETERY is a place filled with rows of tombs, each showcasing the name of a deceased person buried underneath. It is located behind FARAWAY TOWN's CHURCH. Not that many people visit here but only a few come here to pay respect to their loved ones that are now gone from the world itself.

The only NPC the group can interact with is an old man known as OLD BEARDY. Talking to him allows the group to hear his cryptic speeches, such as him believing that he can see spirits and speaking of people mourning very soon.

FARAWAY CEMETERY is accessed right after fighting AUBREY in the CHURCH. SUNNY and KEL can interact with the tombs to read the name of the deceased person buried beneath the ground. Heading over to MARI's grave leads to KEL revealing how the former's death greatly affected HERO, and how he tried to help his older brother regain his sense of self.

If KEL's dialogue at FARAWAY CEMETERY was missed during the previous day, visiting MARI's grave during the morning will lead to the same conversation.

When HERO joins the party in the evening, he is not yet ready to visit MARI's grave, so the party cannot enter FARAWAY CEMETERY.

After the friend group is reunited, the player can return to this area and lay a set of FLOWERS at MARI's grave in the morning. This will lead to HERO apologizing to MARI for not visiting her until now, while reflecting on what he should've done in the past. AUBREY and KEL comfort HERO, telling him that he doesn't have to be so hard on himself and they'll always have his back. With that being said, HERO lays down the set of FLOWERS, ending the cutscene.

If the player interacts with MARI's grave again, the text will show the prompt "Do you want to have a picnic with MARI?", the same line used when resting at any of MARI's picnics in HEADSPACE. Selecting YES will lead to a event showing SUNNY, KEL, AUBREY, and HERO having a picnic while a slow version of MARI's theme plays in the background. Doing this will yield the When she was here... achievement. The group can also find ORANGE CAT right near MARI's grave in the evening, and it will grant them the TRANQUIL CD upon feeding it FISH. 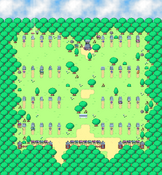 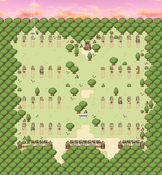