FOREST PLAYGROUND is a area located within VAST FOREST in OMORI. This place is where the youthful residents of HEADSPACE gather to have fun and play around.

The FOREST PLAYGROUND is a large colorful playground located south of the STUMP. The VAST FOREST surrounds the east and west entrances of the PLAYGROUND. At the north entrance of the area, one of MARI's various picnics is set up on the left. There is also one of the many floating mirrors scattered around HEADSPACE. There are many toys, trees, eggs and characters scattered around the space. It is filled with many playground essentials such as swings, monkey bars, a slide, a tetherball pole, and hopscotch.

On the top left area of the area features a poster that constantly changes as the story progresses, ranging from an WANTED POSTER of BOSS to a promotion of the show SWEETHEART's QUEST FOR HEARTS. There is also a nearby MAILBOX that sells items consisting of CANDY, APPLE JUICE, JACKS and PRESENTS.

OMORI can also interact with SHAWN and REN to obtain the skill OBSERVE, after the hide-and-seek minigame. The player can complete a total of two quests, which consist of BERLY'S LOST BALL and DAISY'S DILEMMA. For the first quest, BERLY will join the party in search of the missing tetherball within VAST FOREST. Completing this quest will grant AUBREY the skill HEADBUTT and a BUTT CERTIFICATE. Interacting with BERLY again afterwards increases AUBREY's MP by 20 JUICE.

As for the second quest, the group must head over to OTHERWORLD's JUNKYARD to dig out the FLOWER PUZZLE needed for completion and acquiring the DAISY (CHARM) once OMORI overcomes his fear of heights.

After chatting and looking at BASIL's PHOTO ALBUM, BASIL proposes an invitation for the group to visit his house, which is south of the playground. The group can interact with the characters playing on the playground equipment before leaving the area. Before they can leave, the group is stopped by the rowdy BERLY, who wants them to play hide and seek with everyone. OMORI ends up being chosen but ends up finding almost everyone.

While searching for BASIL, OMORI and friends discover him being held hostage by the local bully BOSS. BOSS is upset that none of them invited him for the game and refuses to let go of BASIL. The group then engages in combat against BOSS, only prevailing at the last moment due to OMORI's willpower. After saving BASIL, the friend group (excluding MARI) head over to BASIL'S HOUSE without any interruptions aside from a few LOST SPROUT MOLES attempting to ruin BASIL's flowers.

The peaceful stroll would soon be disrupted when BASIL discovers a photo that he couldn't recognize inside of his house, unknowingly manifesting his SOMETHING by accident. This leads to BASIL being banished into BLACK SPACE and OMORI being flung back into WHITE SPACE. OMORI would soon regroup with his friends and head back to the playground to discuss on the whereabouts of their missing friend. BASIL's disappearance ends up kickstarting the plot of the HEADSPACE shenanigans for the time being.

Upon returning to HEADSPACE once more, OMORI discovers that the FOREST PLAYGROUND is completely deserted due to MR. JAWSUM and his GATOR GUYS tricking all of the children there into signing contracts to work for them at LAST RESORT. From there, OMORI can interact with the playground objects lying around but nothing will really change unless he heads north to progress the story. It is recommended that the player should complete all of the quests originating here before the TWO DAYS LEFT segment.

Exclusive to the OMORI ROUTE, after sleeping in the NEIGHBOR'S BEDROOM, OMORI, now taking control of SUNNY's body, awakens in his room to finish the last of his chores before returning to sleep. OMORI once again awakens in WHITE SPACE, and goes through the white door to be greeted by his friends. They repeat dialogue from the very beginning of the game before setting off to meet with MARI and BASIL again in the FOREST PLAYGROUND. Interacting with BASIL after the cutscene will grant you a FLOWER CROWN as the boy mentions he'll cherish OMORI and the others forever in his heart.

If the player goes to LAST RESORT and interacts with MR. JAWSUM for the final time, the children hired by JAWSUM will return to the playground. All of them will mostly have the same dialogue as before. In addition, there is an additional GATOR GUY that joins in the fun by playing Hop Scotch, similar to that of HAPPY.

"Your friends warmly smile behind you." 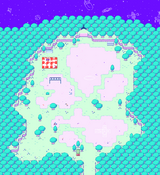 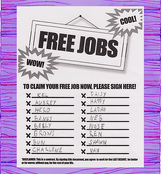 Mikal on the swingset.

Nose playing on the slide.