Snow Forest - A Single Flower Blooms (BACKGROUND)
White Surf Style 6 (BATTLE)
FROZEN LAKE is one of the many sub-locations within OTHERWORLD in OMORI. It is small snowy area connecting to both OTHERWORLD CAMPSITE and SNOWGLOBE MOUNTAIN.

Located south of the OTHERWORLD CAMPSITE. It is a giant frozen lake surrounded by a surface blanketed with tons of snow. The atmosphere is described to be cold and chilly, and there is one of MARI's picnic blanket in the northwest. SNO-CONE JASH runs a SHAVED ICE stand in the northeast. There also dozens of multi-colored trees surrounding the depths of this area. Only a few SNOW BUNNIES roam around with no signs of hostile nature.

In the southwest is an IGLOO. During the first attempt to enter the IGLOO, a strange apparition appears and flies out of the IGLOO. In addition, the FROZEN LAKE's IGLOO serves as a direct teleporter connecting to SNOWGLOBE MOUNTAIN, which can only be found on the OMORI ROUTE. If one plugs in the BATTERIES for the plastic fish, it will then sings a little tune. Its voice resembles K.K. Slider's.

The player can also interact with an fishing rod near one of the holes. By interacting, a random member of your team fishes, while the others wait on the bridge. This interaction grants the party an 1/75 chance for a LIFE JAM, a 74/525 chance for an old boot or an orange, and a 37/525 chance for each one else or nothing. Not all attempts give you an item you can keep, and what you cannot keep gets thrown back in the lake. These items consist of:

After helping SPACE BOYFRIEND calm down, he and his SPACE PIRATE crew can be found enjoying SHAVED ICE. The players can interact with them for extra bits of dialogue. In the OMORI ROUTE, the IGLOO's secret area can be accessed after speaking to PINKBEARD, where he will give you BATTERIES and asks you to find CAPT. SPACEBOY. These BATTERIES can be used in the IGLOO. After using them and letting the plastic fish finish singing, the trapdoor opens and reveals a summoning circle that leads to SNOWGLOBE MOUNTAIN. 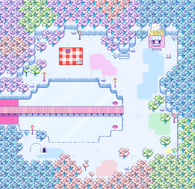 Full Map of the Frozen Lake.

An early version of the Frozen Lake.

MESSAGE IN A BOTTLE