JUNKYARD is one of the many sub-locations within OTHERWORLD in OMORI. It is OTHERWORLD's local garbage dump that is filled with trash the residents throw out everyday, and is accessed after initiating the CAPTAIN OF THE SPACE PIRATES sidequest.

The JUNKYARD is an area based around the remnants of old technology and data but its most notable aspect its space-like motif. Many parts of the JUNKYARD is littered with heaps of garbage stuffed into large containers. Many of these objects include unused items such as a CAN, COMPUTER PART, or DEAD BATTERIES. In addition, some segments have old pieces of furniture lying around and conveyor belts that need activating via a CONVEYOR-BOT.

It can be accessed right after the group receives a JUNKYARD KEY in SPACE BOYFRIEND'S HOUSE. This is also where the GLASSES GHOST is located and one of the jokes they can include in their JOKE BOOK for WEEPING WILLOW. Some events that take place here can alter if the WTF VALUE is set to a specific number. Many of its enemies correlate with the technology-like motif, notably MIXTAPE and DOOMBOX.

There is also an special event that can play in MAP 6 of the JUNKYARD. Heading up on top of the trash bin containers and interacting with the pink-colored couch will lead to cutscene where the group watches a large yellow moon. They can also find one of the jokes required for the JOKE BOOK.

After learning that CAPT. SPACEBOY is sick due to being heartbroken by SWEETHEART, OMORI and friends decide to search through the JUNKYARD in search of his SPECIAL MIXTAPE to cheer him up. As they continue searching through scraps of garbage, the group comes across ROSA, who reveals found the SPECIAL MIXTAPE first and attempts to escape with it.

OMORI and friends give chase but end up getting attacked by DOWNLOAD WINDOW out of nowhere. The group prevails and manages to retrieve the SPECIAL MIXTAPE back from the pompous SPROUT MOLE. Even though ROSA tells them that SWEETHEART broke up with CAPT. SPACEBOY, the group ignores her and head back to help SPACEBOY regain his sense of purpose. 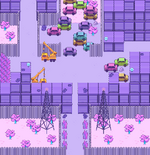 The first segment of the JUNKYARD consists of its many rooms the party can go through. Upon arriving at the first section of the area, the road up ahead will be blocked by a large cardboard of a construction crane.

This object can later be knocked down after defeating the DOWNLOAD WINDOW, and a single way forward that leads deeper into the area. The three watermelons located in this room contain a "GOLD" WATCH charm, RUBBER BAND, and GRANOLA BAR.

Heading east will introduce the party to a special mechanic when encountering enemies within the JUNKYARD titled Common Event 960 in the game's data. The mechanic involves KEL always digging something out from the trash at the start of a battle, with a chance of obtaining CANS, TOFUS, RUBBER BANDS, CHOCOLATES, and CHERRY SODAS. However, there is a 37.5% chance of obtaining nothing.

This area also introduces the TAGGING mechanic when OMORI is instructed to tag AUBREY to break the giant block blocking the path forward. AUBREY's TAG ability is necessary for later areas of the JUNKYARD. There are also three interactable sparkles that contain a GLASS BOTTLE, CARDBOARD, and the THINGAMABOB required for the STRANGE REQUEST sidequest. The only watermelon in the room contains an AIR HORN. 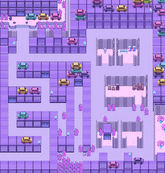 Moving further east will reveal an area featuring a locked gate and treadmills, which directions can change by tagging HERO to convince the CONVEYOR-BOT to work using his charm. Though only the first CONVEYOR-BOT requires the player to use HERO to progress. Stepping on the treadmills allows the party to obtain another JUNKYARD KEY to open the gate. They can also encounter LIFE JAM GUY, who will give them a "free sample" if the player selects YES for his offer.

Doing so will lead an mini-boss fight where LIFE JAM GUY explains the benefits of LIFE JAM, giving some of it to the player, as well as allowing the party to buy more for 250 CLAMS afterwards. There are also a few watermelons and sparklers containing a CAN, GLASS BOTTLE, CHOCOLATE, the COMET HAMMER weapon and FLOWER PUZZLE needed to complete the DAISY'S DILEMMA sidequest. In addition, this is where GLASSES GHOST is located, right near the watermelon holding the COMET HAMMER, with two vending machines allowing the party to buy some TASTY SODAS.

Continuing forward will lead to the party one of the tunnels, where a rare event can play out depending on the player's WTF VALUE (See TRIVIA for more info). There is also LIFE JAM located there as well. Exiting the tunnel reveals a small area with vending machines and LEMONADE from a watermelon, and exiting that area leads to another tunnel segment which eventually brings the party to the next segment of the JUNKYARD.

With one of MARI's picnics at the start of the area, it consists of a fairly straight path with some items hidden in some sparkles. These items consist of a CAN, COMPUTER PART, DEAD BATTERIES, GLASS BOTTLES, and a BUBBLE WRAP charm. The only watermelon within this area holds a STAR FRUIT SODA. There are only two exits in this area, the first blocked by a KEYMAGNET, while the other one leads to the SCARETHROW CAVE.

The entrance to the cave is blocked by two GATOR GUYS. To progress, the player is introduced to KEL's tag mechanic, which consists of him throwing a ball straight at a target while standing on a high platform. Doing this is necessary to remove the KEYMAGNET blocking the path. 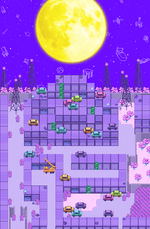 Following that, the party enters a large area featuring a tunnel leading to different parts of the map. Heading up on top of the trash bin containers reveals a BREAKTIME spot featuring a pink couch and a joke sign for the JOKE BOOK. Interacting with the couch will lead to short event where the group is shown watching the large, yellow moon while chatting amongst themselves.

Heading up, then turning right leads to a watermelon containing a HOT DOG. Heading left and then up reveals the location of the D letter for the HANGMAN and the METEOR BALL weapon from a watermelon. This entire area is also where the DOOHICKEY can be found. The only way to properly exit this area is to go left, then down to proceed to the next room.

The SCARETHROW CAVE is a special area where MR. SCARETHROW resides. It can be accessed by entering a trash bin located left of where the KEYMASTER was originally standing. The entrance to the area is at first blocked by two GATOR GUYS, both only leaving once KEL uses his tag ability for the first time. As there's not much to do here, KEL must be tagged, allowing him to throw multiple balls straight at SCARETHROW.

Doing so will lead to him producing multiple sound effects while monologuing about himself. Eventually, after exhausting SCARETHROW's dialogue, this will yield the They call me Scarethrow achievement. 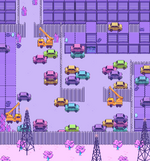 The ROSA CHASE AREA consists of two maps. Upon entering the first area of this segment, the party is blocked by a giant cheese wheel. The only way to remove the obstacle is to tag HERO, who'll blow his whistle to summon one of his animal friends EMS. EMS will eat the entire cheese, and after doing so reveals ROSA digging out something from a trash bin before leaving.

Going further will reveal a long maze-like area where ROSA is revealed to have CAPT. SPACEBOY's SPECIAL MIXTAPE. Due to ROSA refusing to hand it over, the party has to chase after the obnoxious SPROUT MOLE. From there, the party must follow every direction ROSA is heading towards until she reaches an dead end at the last room of the JUNKYARD. 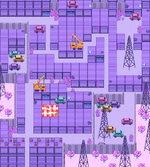 The party can find few items scattered around in watermelons and sparkles within both rooms. The watermelons contain LIFE JAM, BUTT PEACH SODA, RUBBER BAND, STAR FRUIT SODA, HOT DOG, CAN, RAIN CLOUD, COMPUTER PART, WHATCHAMACALLIT, TV REMOTE, and the BAKING PAN weapon. This weapon will grant HERO the SNACK TIME ability, in which he can heal all friends for 40% of their HEART. Other than that, there are also a few toilets that have RAMEN inside of them.

MARI's second picnic is set up right near the last room, so the party can rest up and recover all their HEART and JUICE to prepare themselves to take on the boss of this location.

The final room is a decently small room that notably features multiple monitors and a giant 404 written in the middle. The party arrives here to retrieve the SPECIAL MIXTAPE from ROSA the first time around. When they cross the yellow line, this results in the DOWNLOAD WINDOW appearing out of nowhere for a boss fight.

If on the OMORI ROUTE, the party can return here and if OMORI is equipped with the UNIVERSAL REMOTE, the player can gain access to the PAIN AREA by interacting with a glitchy tv screen. This can only be done once. 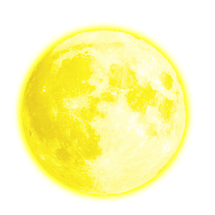 The large glowing moon shown at the Junkyard.

Omori and his friend sitting on the couch at the Junkyard. 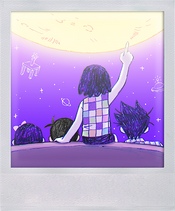