LOST FOREST is a hidden location within PYREFLY FOREST in OMORI. It is a mysterious forest containing remnants of the truth, accessed through a secret pathway in the aforementioned location.

LOST FOREST shares the same layout as PYREFLY FOREST in terms of appearance and design. However, one notable difference is that the areas LOST FOREST hosts appear to be looping upon first glance. DADDY LONGLEGS mentions that many tend to get lost here due to its bizarre pathways that continue repeating for endless amounts of hours.

To navigate through the location, the player must take the paths guarded by the GHOST BUNNY floating around that area. Doing so will allow OMORI and friends to progress through the misty forest. Interacting with DADDY LONGLEGS as you progress will result in him giving you exposition about the forest and about the nature of WHITE SPACE. This is also the location of the H KEY required for the HANGMAN as well as a PEARL item.

LOST FOREST can only be accessed if the player chooses to head east of the room featuring the only RARE BEAR fightable in PYREFLY FOREST and precedes the track leading to SWEETHEART'S CASTLE. In the following room, the player can choose to either light up several candles to distract the SPIDER CATS from catching you, or move while the SPIDER CATS are in their sleep animation.

If OMORI approaches a SPIDER CAT that's awake and with no candle to distract it, it'll start chasing him and direct contact will teleport OMORI to the entrance of the area. At the end of that area reveals SOMETHING hovering over a tree stump before vanishing as usual. Continuing to go east then north will allow the group to reach the entrance of LOST FOREST, not before briefly encountering STRANGER right there too if the player hasn't collected the W KEY.

Upon reaching the clearing, the party will be greeted by DADDY LONGLEGS, who introduces them to the nature of LOST FOREST and presumably HEADSPACE. The party can then navigate their way through LOST FOREST by moving in the same direction where a GHOST BUNNY is residing. Completing LOST FOREST leads to DADDY LONGLEGS speaking his final words. He reveals information regarding the origins of HEADSPACE and how SUNNY expanded it upon arriving there as OMORI in the past.

With that being said, DADDY LONGLEGS walks into a large blue flame, vanishing from HEADSPACE. The group can then collect the H Letter and leave LOST FOREST. Completing LOST FOREST will render it inaccessible for the remainder of the game. 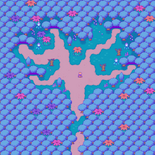 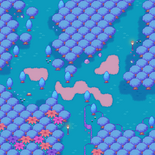 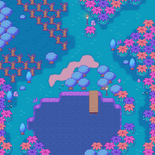 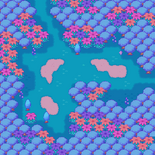