This page is about MARI IS HOME and an entrance to RED ROOM. For the page featuring content regarding another page related to here, see RED SPACE.

MARI IS HOME is an area found within BLACK SPACE 2. It can be accessed through THE DOCKS, only if the player is on the SUNNY ROUTE or transfer the ongoing route from SUNNY ROUTE to OMORI ROUTE by not responsing to KEL at the start of TWO DAYS LEFT. It is one of the few areas that links to RED SPACE.

MARI IS HOME serves as a recreation of SUNNY'S HOUSE, where SUNNY meets up with his friends. This area is noticeably different than the regular incarnation, with notable differences being the noose in the bathroom, a gigantic STRANGER peering over SUNNY's room, and MOM's room having a much larger hallway. The piano room also is completely lacking a piano and instead has a trapdoor where it would normally be, leading to a basement with a long hallway. Whether this crawlspace exists in SUNNY'S HOUSE regularly is unknown.

After talking to present day incarnations of KEL, AUBREY, and HERO, it is stated that MARI is somewhere in the house, but is currently ignoring them. Going down the crawlspace ladder you can find her locked behind a door, similar to that of the first optional HELLMARI encounter during the PROLOGUE. She will say unreadable text, and you will then get a prompt to open the door or ignore her.

From here, opening the door leads you into RED ROOM, a subarea of RED SPACE, and MARI will not appear. If you ignore MARI, she will open the door herself and a short chase sequence will occur where a distorted version of MARI will chase OMORI down the hallway and up the ladder. If this MARI catches OMORI, you are then booted out of the event, back to THE DOCKS.

From here, you can go back into the door and find MARI in SUNNY's room. Interacting with her does nothing. The Piano Room is also back to normal, and you cannot enter RED ROOM. If the player chooses to not go back into the door, they'll find they temporarily can't stab themselves until they walk far enough away from it. Knocking can be heard on the other side of the door.

This area alongside RED ROOM is probably the most convoluted and secretive area to get to in all of OMORI. It not only requires you to open the door for KEL during THREE DAYS LEFT segment, but to also access THE DOCKS. Here are a full list of steps on how to get to MARI IS HOME without resetting HEADSPACE, from beginning to end:

You can also access MARI IS HOME when you open the door of SUNNY's house to meet KEL at THREE DAYS LEFT, but not open the door and go to sleep at TWO DAYS LEFT and go to BLACK SPACE 2 after refighting the three SOMETHING variants in OMORI ROUTE.

At this point, you can explore around SUNNY'S HOUSE as mentioned above. When you want to get to RED ROOM, go to the piano room and down the ladder. Make sure to let MARI in, unless you intentionally want to see the event where she chases you. 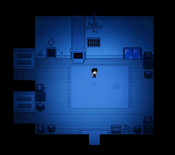 The first area when entering this location is the living room. There are multiple scratches and empty walls within the room. Some objects seem to be completely missing, such as the family photo or the clock hanging on the wall.

The overall layout of the room is mostly the same as the current layout of SUNNY'S HOUSE. Continuing up north will bring the player to the STAIRS area. Going northwest and southwest takes OMORI to the location's KITCHEN and DINING ROOM respectively. 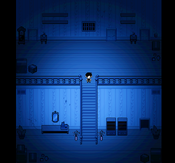 Heading over to next room north reveals more of the abandoned layout of this location. The door to the TOY BOX is completely missing, and in its place is a large crack that conceals the room. There is also a hanging mirror on a wall near the large crack. Like with the previous room, there are few scratches on the wall. The same could be said with the kitchen, in which is mostly left intact.

Note that if OMORI ignores MARI at the door or is caught by HELLMARI, all doors in the hallway leading to SUNNY'S BEDROOM, MOM'S ROOM, and the BATHROOM will now be shown swung open. Though, this doesn't effect anything too major in this area. 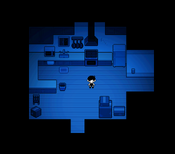 The kitchen remains the same compared to most rooms in MARI IS HOME. However, there are a few cracks shown on the walls. If the player returns to this area after opening the door for MARI, SOMETHING will appear in this location for a split second before vanishing.

Its animation will not play nor its usual sound effect when it disappears. This can also be viewed more clearly in a RPG MAKER MV project when looking into the game's data.

It is unknown why this event occurs, although it only appears after the door sequence in the corridor or when letting HELLMARI catch the player during the chase sequence. 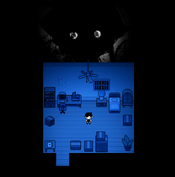 SUNNY's BEDROOM resembles the same one shown in FARAWAY TOWN, but darkened like the other rooms in his house. The most notable feature of this subarea is the giant, looming STRANGER staring at the player from above.

There is not that much to do but simply explore the area. OMORI's sketchbook from WHITE SPACE can also be found here. If the player lets HELLMARI catch them in the CORRIDOR, MARI will appear facing away from OMORI, seemingly shunning him, and cannot be interacted with at all.

The STRANGER that is found within the bedroom also shows up as a brief vision hallucinated by SUNNY himself on rare occasions at night.

The bathroom featured in this area is a lot smaller than the one from FARAWAY TOWN. It lacks a ton of bathroom equipment and only contains the bathtub.

The most disturbing feature about this facsimile is that it contains a noose hanging above the wall. The noose's presence serves as one of the many objects that reminds SUNNY of the tragedy four years ago. There is not that much to do there but view the room and exit. The noose also appears to resemble the LIGHT BULB from WHITE SPACE.

When entering SUNNY'S PARENTS' room, OMORI will first be taken to a long hallway where he has to walk up forward to reach the area. Eventually, OMORI can view this room but nothing really changes here other than the abandoned atmosphere of the house. Like with the kitchen, it is one of the few rooms left intact. 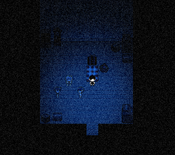 The piano room appears to be more larger than one featured in FARAWAY TOWN. It appears to lack the piano MARI once played and instead is replaced with a ladder leading to a corridor.

The real world versions of KEL, AUBREY, and HERO can be found near one of MARI's picnics. Interacting with each one of them will prompt them to inform OMORI that MARI is missing. If the player opens the door in the corridor or let HELLMARI attack them, the room will go back to normal. The piano will return to its rightful spot and the floor is covered by a carpet. KEL, AUBREY, and HERO also disappear from this room. 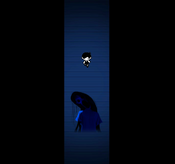 The corridor can be accessed by taking the ladder down from the piano room. OMORI will then be taken a long, narrow hallway where he can walk down to reach a dead end. From there, MARI appears behind the door and will speak out empty text for a few seconds. Afterwards, the player is given a prompt to either open the door or keep it closed.

Opening the door will reveal a glimpse of RED ROOM, a subarea of RED SPACE. The animation played is akin to that of the first HELLMARI jumpscare on the first night. If OMORI chooses to walk away instead, HELLMARI will come chasing him. The player can escape HELLMARI by leaving through the ladder or simply get caught by her. Either outcome will warp OMORI back to THE DOCKS.

Leaving the door closed will do nothing as expected. If OMORI chooses to turn away like with the "Open Door" option, this will still result in the same sequence of HELLMARI chasing OMORI. Returning to the bedroom after this sequence will reveal MARI standing in SUNNY's bedroom but facing away from OMORI.

RED ROOM is a special subarea of RED SPACE, which can be accessed through MARI IS HOME. It features the same background RED SPACE uses and contains multiple stumps with knives stabbed in various places, as well as flower crowns resembling BASIL's crown. The entire layout of this map presumably references the tree MARI's body was hanged on, BASIL's status with this tree, and the birthplace of SOMETHING. For more info on that page, see RED SPACE. 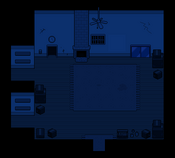 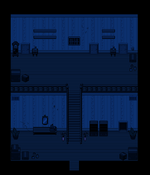 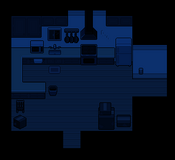 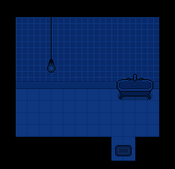 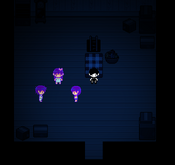