MEMORY LANE is a location in OMORI exclusive to the SUNNY ROUTE. It is a long, darkened road filled with some of SUNNY's most precious memories.

MEMORY LANE is a literal take on the metaphor, appearing to be a very long street, complete with streetlights that do not work save for a select few that teleport SUNNY to distant memories. Each time SUNNY relives a cherished memory, the location's atmosphere will change depending on which memory he enters first.

After conversing with a vision of BASIL and MARI's spirit in a facsimile of his house, SUNNY finally recovers the violin he had long hidden within his toy chest. Once he leaves his home, he is suddenly transported to a dark and stormy road. SUNNY must move forward until he reaches one of the broken streetlights suddenly flashing a light down.

He then enters six of the streetlights, reliving and learning to cherish the good memories he had with his sister and friends. From there, SUNNY can interact with his friends, each of them speaking extra dialogue. Through confronting and accepting the TRUTH, SUNNY is able to recall his most precious memories. This will allow slowly repair his broken VIOLIN as he enters relives each memory. After remembering these memories, SUNNY proceeds to enter the door of the BACKSTAGE, ready to move on from the past.

The first memory SUNNY relives took place on September 6th, where he and his friends were playing cards inside of their treehouse. Everyone is shown having a good time while looking at the cards they have.

HERO notes that his card deck is exactly what he needed, while KEL realizes his deck doesn't look so good. MARI tells KEL he shouldn't blurt out what he has and instead keep a good poker face, surprising KEL as she arrives bringing cookies. BASIL then takes a photo of this commotion just as the moment happens.

KEL appears exasperated by BASIL taking a photo of him struggling while MARI tells him it's not a big deal. BASIL laughs at KEL, who then askes if he's hiding something suspicious. The flower boy assures KEL that he'll find out soon. With that being said, the friend group resumes their game. Interacting with KEL, BASIL, or AUBREY yields what their cards are, interacting with HERO gives a discussion between him and MARI on whose cookies are better, and interacting with MARI causes her to give SUNNY a cookie.

Once SUNNY leaves this memory, he will remember the taste of freshly-baked cookies. He also recalls that it smelled better knowing that MARI made it from scratch.

The second memory SUNNY relives took place on June 22nd, where he and his friends went to the beach in celebration of the first day of summer vacation. HERO is shown finishing cutting open a watermelon into slices for his friends to eat.

MARI thanks HERO for helping out while flirting with him, much to the latter's flustered reaction. KEL yells out in excitement as he chomps down into his watermelon slice.

As the group continues eating, BASIL decides to take a photo of AUBREY, who is happily taking a bite into her watermelon slice. AUBREY catches note of this, telling her friend not to take photos of her while she's eating. BASIL apologizes but mentions he thought she looked cute. He then decides to show AUBREY the photo once its ready, to which AUBREY complies as she trusts his words.

Interacting with KEL or AUBREY reveals them to be spitting watermelon seeds at each other, interacting with MARI or HERO show MARI inadvertently revealing she used to put bugs in HERO's desk, and interacting with BASIL shows the photo. Interacting with MARI a second time causes her to thank SUNNY for joining them, and offering to bury him in the sand. Once SUNNY leaves this memory, he will remember the taste of watermelon. He also recalls that it tasted more delicious when he ate it with everyone in the hot summer.

The third memory SUNNY relives took place on March 31st, where the friend group is having a picnic at their HANGOUT SPOT. After eating all the food, everyone fell asleep, except for HERO, BASIL, and MARI.

Despite being asleep, SUNNY hears a conversation between the three friends. MARI thanks HERO for cooking lunch for them all and tells him that one day he will become a world-famous chef who'll make her delicious food everyday. HERO is surprised by this compliment but agrees as MARI mentions that she believes in him.

While the two converse, BASIL takes a photo of this tender moment. MARI tells BASIL that she's glad he using his camera more often for his hobby. BASIL admits that this hobby of his is fun once getting the hang of it but notices the photo he took is slightly off due to HECTOR's poop being in the background. BASIL yells at HECTOR for ruining his photo, which causes SUNNY to wake up.

Interacting with MARI causes her to be reminded of when SUNNY was a baby, interacting with HERO causes him to ask for SUNNY's opinion on being a chef, and interacting with BASIL yields the photo. Once SUNNY leaves this memory, he will remember the feeling of sleeping on MARI's lap. He also recalls that it felt more comfortable since he knew that no matter what... MARI would always keep him safe.

The fourth memory SUNNY relives took place on April 29th, where he and BASIL meet up with KEL and AUBREY near KEL'S HOUSE on a rainy day. KEL questions the two boys for taking so long, to which BASIL informs him that they were busy playing a new handheld game called PET ROCKS. AUBREY interrupts the conversation and askes BASIL to take a picture of her new pink-colored raincoat.

BASIL proceeds to take a photo of AUBREY in her raincoat, while KEL photobombs in the background. AUBREY then askes SUNNY if he likes her new raincoat. A disgusted KEL tells his friends that pink is a gross color but AUBREY retorts his words. AUBREY also reveals that she and MARI were planning to dye their hair together; MARI will have her hair dyed purple while AUBREY's will be pink.

KEL still thinks that pink-dyed hair is weird, while AUBREY admits that she and MARI both think it would look cute. Despite this, BASIL believes that pink would fit AUBREY quite well and askes SUNNY about his thoughts on the idea. If selecting YES, BASIL tells AUBREY that even SUNNY believes pink would fit her, to which AUBREY smugly tells KEL that he's the one being weird, much to KEL's annoyance. If selecting NO, BASIL decides to not tell AUBREY as it would hurt her feelings.

SUNNY then walks ahead, and KEL tells him that he and the others will catch up eventually. Once SUNNY leaves this memory, he will remember the sound of falling rain hitting his umbrella. He also recalls that it sounded more calming knowing that he experienced this moment right beside his best friends.

The fifth memory SUNNY relives took place on February 18th, the day when the group celebrated BASIL's twelfth birthday party inside of his house. Just as the group is ready to take their photo, AUBREY askes SUNNY if he wants to be with them. MARI tells her that SUNNY is a bit "camera shy" but tells assures SUNNY not to worry as he'll overcome that shyness soon.

The scene cuts over to SUNNY holding BASIL's camera, readying himself to take the photo of his friends. AUBREY and BASIL praise HERO for making a delicious strawberry cake. AUBREY then wonders what wish BASIL will make, to which KEL tells that she shouldn't just ask him that question. After a brief moment of the two bickering, BASIL ponders on what to wish for. He then tells his friends that what he wishes for is a secret, much to the disappointment of AUBREY.

Regardless, HERO tells them all to hurry with the birthday song as the candles are slowly melting. The group then sings HAPPY BIRTHDAY to BASIL and everyone celebrates with happiness. SUNNY fondly remembers BASIL's gentle smile as he blows out his birthday candles. Along with that, he also recalls that both him and BASIL made their own wishes afterwards. There are no interactions as this segment serves as a cutscene.

The final, most cherished memory SUNNY relives took place on December 25th, when Christmas finally came and everyone was opening their presents inside of SUNNY'S HOUSE. Just as KEL finishes opening up his present, which was given to him by HERO, the scene pans over to SUNNY about to open his gift.

It turns out that SUNNY's present was from all of his friends. All of them had done several activities to save enough money for the present. The group tells the boy that although its been a while since the latter quit playing the violin, they noticed how much SUNNY wanted to spend more time playing the violin to be with his sister. It is also revealed that this plan was thanks to BASIL's idea.

With that being said, SUNNY opens his new present, which turns out to be a new violin. The group then encourages SUNNY to try out the instrument. The scene cuts over to BASIL's first photo showing SUNNY playing his new violin for the first time. Despite feeling anxious at first, SUNNY didn't mind as he played his first note, knowing that the group believed in him. No matter what, SUNNY remembers his emotional feelings of not wanting to disappoint them as they were his cherished friends. There are no interactions as this segment serves as a cutscene. 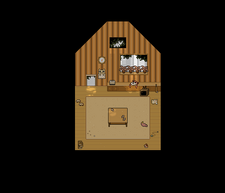 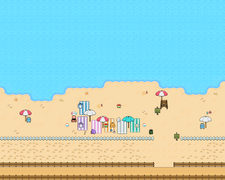 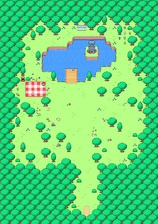 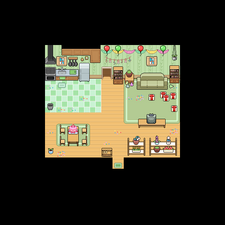 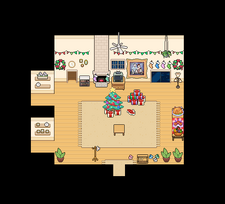