MR. JAWSUM is a major antagonist in OMORI. He runs the LAST RESORT, located within the UNDERWATER HIGHWAY. He is also the boss of the GATOR GUYS and their other brothers.

MR. JAWSUM is an anthropomorphic shark dressed like a business man. He wears a blue-and-white striped suit, a red tie, and some cool shades. Some illustrations also depict him having a watch on his left arm. He is usually seen sitting at his desk within his office at the LAST RESORT.

MR. JAWSUM is an unbelievably successful businessman who wants his entire career to be successful. He doesn't hesitate to trick anyone into signing his CONTRACTS to work for him at LAST RESORT. JAWSUM often berates his workers if they make any mistake on any of his funding projects. Despite this, JAWSUM is actually a benevolent boss when getting to know him better, prominently shown with his demeanor towards HERO. MR. JAWSUM treats HERO with great admiration and even states that he's "like the son he never had." Notably, he keeps a framed picture of both of them on his desk. There's also multiple dedications to HERO strewn throughout LAST RESORT.

One note is that he puts the people he forcibly hires into positions they're comfortable in. Instead of VAN, he put BERLY in his job as the bouncer since VAN is too soft and BERLY is hard-headed and stubborn. He even gives the lazy BANGS the task of inspecting beds and the puzzle-loving NEB an engineering job. JAWSUM isn't willing to lose any of his employees even after he sends PLUTO to send the party packing.

Even though MR. JAWSUM appears to run LAST RESORT well, it's clear that the company is just barely staying afloat. This is evident by how some of the customers who are staying overnight are clearly dissatisfied with the quality and service. AUBREY points out that that the TOFU Charity is the worst thing to happen since it takes precedence over the other more important matters that have been rescheduled. These flaws lead to JAWSUM realizing that he isn't fit to work as the boss and his decision to hand the position over to HERO, knowing he'll do a better job in his place.

After MR. JAWSUM and his GATOR GUYS tricked everyone at the PLAYGROUND into signing contracts, he put everyone to work at his hotel: the LAST RESORT. OMORI has to go there to get KEL, AUBREY, and HERO out of their jobs and continue looking for BASIL. Since MR. JAWSUM refuses to give up HERO, due to the latter being his best employee, the party ends up fighting MR. JAWSUM and his backup GATOR GUYS for HERO's freedom.

After being defeated, he sends his GATOR GUYS away and calls his other best employee, who is revealed to be PLUTO. He then orders PLUTO to defeat the party, leading to a boss fight with the powered-up rogue planet. Before PLUTO is able to release his full power, MR. JAWSUM breaks up the fight as he doesn't want to lose another star employee. Afterwards, MR. JAWSUM reluctantly lets HERO go and encourages the party to go wild while searching for BASIL.

Upon returning to LAST RESORT on ONE DAY LEFT, the party finds MR. JAWSUM's office in complete disarray. He will then tell the group that ever since HERO left, the casino hasn't been doing so well without HERO's skills and talent. He then realizes that this career isn't the path he should take in life and reflects back to his passion towards his job.

With that being said, MR. JAWSUM gives the party a GIANT CHECK, which can be used to feed HUMPHREY in order to regain access to the whale's location. Along with that, he names HERO the new boss of the casino, much to the latter's shock and confusion. MR. JAWSUM decides to go on a long vacation and bids the party farewell as he leaves his office with Hawaiian-style clothes and a few suitcases. He can later be refought alongside his GATOR GUY henchmen through the BOSS RUSH simulator, run by BOSS inside HUMPHREY.

*MR. JAWSUM will use this skill at a 20% variance rate. An alternative variant is used if there's only one GATOR GUY in battle. This version will always be 100% used in that scenario.

**If by himself, MR. JAWSUM will always call forth a GATOR GUY to assist him in battle. Alternatively, if there's only one GATOR GUY, JAWSUM will call for another one. This also applies to the BOSS RUSH variant of the enemy.

*MR. JAWSUM will use this skill at a 20% variance rate. An alternative variant is used if there's only one GATOR GUY in battle. This version will always be 100% used in that scenario.

**If by himself, MR. JAWSUM will always call forth a GATOR GUY to assist him in battle. Alternatively, if there's only one GATOR GUY, JAWSUM will call for another one. This also applies to the BOSS RUSH variant of the enemy.

MR. JAWSUM starts the fight with two GATOR GUYS in front of him. While the GATOR GUYS are present in battle, he cannot be harmed, as they will take any damage that he would take. If he takes an action while both his GATOR GUYS are around, he will turn them all ANGRY. If at least one GATOR GUY is missing when it comes to his turn to take an action, he will instead call in another GATOR GUY, who will enter the battle and immediately attack one of your party members.

MR. JAWSUM doesn't have a lot of HEART and relies on his manpower to do all the heavy lifting. When he reaches low health he also automatically becomes ANGRY the moment he discovers that his manpower is starting to fail him.

The tricky bit here is trying to clean out the frontline in as few actions as possible so that your remaining party members take their turn to attack MR. JAWSUM himself. You'll find yourself using area attacks as much as possible, between KEL'S RUN 'N GUN or FLEX & REBOUND and AUBREY'S WIND-UP THROW. Items that deal group damage like JACKS and DYNAMITE can help clear out the frontline as well. If KEL was able to take down the GATOR GUYS with his attack, OMORI could land a powerful HAPPY vs. ANGRY hack away. It may be noted that extra hit rate for OMORI may be beneficial for this battle, but keep in mind that skills and equipment cannot be changed between this battle and the one against PLUTO EXPANDED.

You may also want to consider turning the party HAPPY or ANGRY to speed up the fight. HAPPINESS will give automatic damage bonuses against an ANGRY JAWSUM but runs the risk of missing his goons that constantly file in. ANGRY gives a straight damage bonus to sweep away newly-entering GATORS. Either way, the GATOR GUYS' offense power is very limited, only hitting a single party member each time, and the battle is not too tough.

After defeating MR. JAWSUM, he will call in his second best worker, PLUTO, to settle the score. 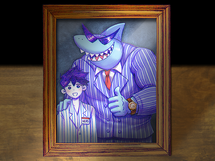 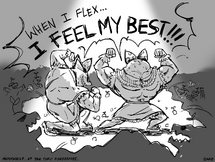 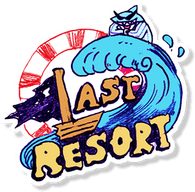