NEIGHBOR'S ROOM is a location in OMORI. It is a colorful room where OMORI meets up with his friends to go on more adventures within HEADSPACE. It is also connected to WHITE SPACE, VAST FOREST, and later DEEPER WELL.

NEIGHBOR'S ROOM is vibrant, colorful room featuring various objects that resemble many of SUNNY's toys he used to play with. The bottom right corner features a TV playing a movie; various cards and food are scattered on the floor. There is also a small pool featuring a red tentacle sticking out from the bottom left corner. A purple-colored clock hangs on the wall too.

A white table right next to where OMORI's friends play their cards features an empty plate holding a tiny bean as well. The room also features a large tree with pink leaves that resides right next a long golden table that holds numerous items such as a toaster or a photo of someone familiar.

The most notable feature of the place is the multicolored staircase that leads to VAST FOREST and the BIG YELLOW CAT that watches over its residents. There is also a SNAKE on the staircase that gives OMORI his allowance that increases in amount as each day passes by.

The NEIGHBOR'S ROOM was where OMORI first met his friends as shown in one of the cutscenes that takes place after SUNNY remembers his first encounter with his monochrome "alter-ego".

The group would usually spend time playing cards or heading out to go on adventures in HEADSPACE. This cycle would repeat continuously throughout SUNNY's four years as a hikikomori.

Like many of HEADSPACE's locations, this area was largely inspired from SUNNY's TREEHOUSE that he and his friends used to play in four years ago before MARI's death.

During the prologue, OMORI visits this location upon entering a white door that appears after he collects his SHINY KNIFE within WHITE SPACE. OMORI is greeted by his friends AUBREY, KEL, and HERO, who were all playing cards until AUBREY accidentally runs over the card deck to welcome OMORI.

From there, OMORI can interact with his friends and helps AUBREY find her STUFFED TOY that KEL hid in an watermelon placed right next to a red tentacle. Completing this side-quest leads to HERO telling OMORI that MARI and BASIL are waiting for them at the FOREST PLAYGROUND. The group proceeds to leave for more adventuring afterwards.

On TWO DAYS LEFT, when OMORI enters the location, he finds himself locked out of WHITE SPACE by SOMETHING, who ominously stares at the young boy behind the door's keyhole. Along with that, OMORI's friends are absent due to working at LAST RESORT.

After defeating HUMPHREY and being clued in to the true nature of HEADSPACE within the MAP OF TRUTH, the tunnel he swims through opens into a shortcut that links the ROOM with DEEPER WELL, allowing for quick passage to BASIL'S HOUSE once the HANGMAN puzzle is complete.

On the SUNNY ROUTE, this location makes one final appearance if the player chooses not to continue against OMORI during their final battle. Upon assuming complete control of SUNNY's body, OMORI reawakens in WHITE SPACE once more. He then reunites with his friends, who all appear to be strangely silent as they rejoin his party.

When the party leaves the room for more "adventuring", the scene cuts forward to the REAL WORLD, where SUNNY commits suicide by jumping off the balcony of the hospital, plummeting endlessly to his presumed death.

After sleeping in the NEIGHBOR'S BEDROOM, OMORI, now taking control of SUNNY's body, awakens in his room to finish the last of his chores before returning to sleep. OMORI once again awakens in WHITE SPACE, and goes through the white door to be greeted by his friends. They repeat dialogue from the very beginning of the game before setting off to meet with MARI and BASIL again in the FOREST PLAYGROUND.

Following that, the entirety of HEADSPACE is free for OMORI to explore, and he can enter and leave the room as he pleases. Should he choose to spare ABBI, her tentacle which sits in the corner of the room offers a BASEBALL BAT, one of AUBREY's strongest weapons. 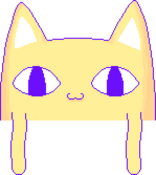 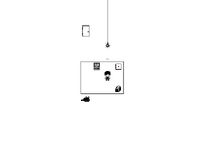 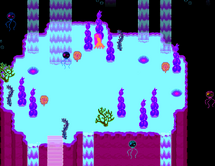 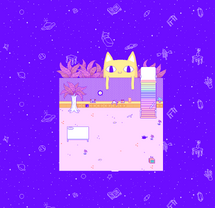 Full map of the Neighbor's Room.

Early concept art of the Neighbor's Room by OMOCAT. 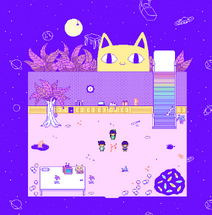 Another early version of the Neighbor's Room. 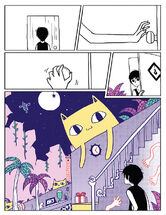 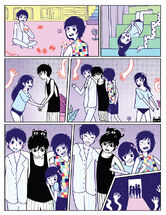 Neighbor's Room as it appears in the Omori Standard Edition Preorder Trailer.