This article is about the titular character OMORI. For his real world counterpart, see SUNNY. For the game itself, see OMORI (GAME).

OMORI is the titular deuteragonist in OMORI. OMORI can be controlled by the player during the night, where WHITE SPACE can be explored. When OMORI is in the lead, he can cut down obstacles with his knife.

Not much can be said about OMORI's personality, as he is a silent protagonist. However, it is implied that he is quite melancholic, as his narration sometimes has gloomy inputs and his final battle dialogue is directly talking down to SUNNY. His abilities are also reflective of this gloominess, being either violent in nature or simply gaining the SAD emotion, or having an advantage while SAD. However, it can be speculated that this is moreso reflective of SUNNY's emotional state, as OMORI is a character built from SUNNY'S conscience in WHITE SPACE and HEADSPACE.

At some point following MARI's death, SUNNY began visiting WHITE SPACE through a black-and-white doppelgänger called OMORI. WHITE SPACE is born out of SUNNY's cognition whenever he sleeps, so its contents are subjective from his memories and perceptions. OMORI's existence started as a sort of "shell" for SUNNY to protect himself from the horrors of the truth, which took the form of SOMETHING and BLACK SPACE.

Inside WHITE SPACE, OMORI can freely visit an imaginary world where his friends reside along with comical representations of acquaintances and familiar fictional mascots. WHITE SPACE serves as an escape from the truth behind MARI's untimely demise. To this end, SUNNY's OMORI is routinely inside WHITE SPACE, as SUNNY has been a shut-in since MARI's death and all of the interactions we seen within HEADSPACE come with a sense of great familiarity from the characters that reside within.

Eventually, BLACK SPACE encroaches on HEADSPACE, and repressing the resurfacing memories requires HEADSPACE to be reset -- which has been done several times over, only serving as a stopgap measure. As SUNNY's repression grew stronger and HEADSPACE continued to change, OMORI continued to change too, and eventually became something more than what his creator originally intended.

Years of repressing the truth resulted in OMORI becoming the very image of suicidal guilt and depression that SUNNY denies, essentially making him less of an alter ego. He becomes more of a culmination of the repression of trauma and escapism that SUNNY has done over his past four years as a hikikomori. By the time of the game's events, OMORI behaves autonomously and begins to influence SUNNY instead of the other way around; however, his goal is still the same: to protect SUNNY from the truth.

While OMORI and WHITE SPACE serve only to repress SOMETHING, OMORI begins acting more hostile towards SUNNY as he gets closer to the truth of BLACK SPACE, culminating into OMORI stabbing DREAM BASIL and attempting to make SUNNY cease to be. After SUNNY lands in the hospital from fighting with BASIL on the final night, OMORI fights SUNNY inside WHITE SPACE, presumably for control of his mind and body. There are two possible endings depending on if one of two options is chosen upon losing to OMORI the first time around:

In this route, things change as SUNNY represses more memories of MARI's death as he chooses to shut himself away even more than before. By the time OMORI arrives in BLACK SPACE, he slowly begins to take over SUNNY's mind and body. However, STRANGER attempts to stop SUNNY from submerging himself further into his dream world of escapism. SUNNY tries to fight off STRANGER but fails as the shadowy figure overwhelms him, leading him to be transported into RED SPACE, where OMORI awaits him on his throne of hands.

From there, OMORI descends from his throne and helps SUNNY withstand STRANGER's wrath. However, upon confronting the STRANGER, it appears that it has given up on trying to convince SUNNY to stop his unhealthy coping mechanism. OMORI is then warped back to BLACK SPACE by a RED HAND, allowing him to rescue BASIL in the CHURCH OF SOMETHING. The two friends leave BLACK SPACE and return to NEIGHBOR'S BEDROOM, where all of their friends are sleeping in their beds.

Once OMORI and BASIL fall asleep, as instructed by the BIG YELLOW CAT, this results in a soft reset for all of HEADSPACE. This leads to a repeat of the first few minutes of the game with a few changes: BASIL appears to have never discovered the truth, more areas are expanded, and more optional sidequests are available for OMORI and friends to complete.

SUNNY eventually wakes up, only to find SOMETHING following him at every step of his house. Being unable to suppress SOMETHING's presence, SUNNY succumbs further into his self-hate. If SUNNY chooses to go back to sleep, he ends up overwhelmed by the traumatic memories of his past.

OMORI then decides to "save" SUNNY from being fully consumed by his trauma. From there, he assumes complete control over SUNNY, causing the latter to cease to exist as he resigns himself to a never-ending cycle of dreaming forever and being unable to face the truth. After waking up once more, only two of the NEUTRAL ENDINGS can be obtained.

If SUNNY chooses to GO TO SLEEP in BASIL'S HOUSE after regaining his memories of the truth, the following events will occur. Upon awakening once more, SUNNY finds himself all alone. He heads to the hallway, only to find his friends and POLLY in the hallway, distraught over BASIL's suicide. Opening BASIL's door reveals his corpse slumped against the wall with a large hole in his abdomen represented by SOMETHING. The only option will then be to return home as the rest of the game will play out depending on if SUNNY picks up the knife or not before going to sleep.

OMORI is a balanced combatant, with an even spread of stats. Although he is not as involved in the party's conversations, he has the most emotive potential, being able to reach three levels of EMOTIONS compared to two for the others. His combat abilities are a bit more emotionally manipulative, as he has skills that can counter the bonuses each variant of emotion bestows, culminating in the ability to straight-up deal extra damage to an enemy with any emotion using EXPLOIT. He's your main source of inflicting SADNESS and has a few skills that take advantage of him or his target being SAD too.

His own FOLLOW-UPS are more selfish than his companions', as his standard follow-ups are the ability to strike again and lower an enemy's Speed. However, he does come with the ability to Release Energy, cooperating with all his companions to perform a devastating all-out attack.

OMORI'S power reaches his absolute peak when you choose the OMORI route, as he earns four more skills exclusive to that route when there's ONE DAY LEFT. RED HANDS is gained when he returns to HEADSPACE after resetting it, while VERTIGO, CRIPPLE, and SUFFOCATE are all obtained by revisiting the LOST LIBRARY and fully conquering the embodiments of his past phobias.

*Omori has two different variations of his "RELEASE ENERGY" Follow-Up:

OMORI has only one weapon throughout most of the plot, and the SHINY KNIFE he carries automatically upgrades to the KNIFE and DULL KNIFE as he re-enters HEADSPACE with each passing day. On the OMORI ROUTE, OMORI's knife will eventually turn into the RUSTY KNIFE upon resetting HEADSPACE after completing BLACK SPACE. The RED KNIFE is the sole exception to the pattern, as it is obtained and automatically replaces the RUSTY KNIFE after fighting and sparing ABBI.

The data table shows OMORI's raw stats (without any item bonuses, nor HEARTS bonuses gained by watering plants, nor any special bonuses).

The player can boost OMORI's HEART stat by constantly watering the flowers near the path to BASIL'S HOUSE. Though, just note that OMORI can only gain HEARTS from the tulip, sunflower and the lily of the valley flowers. In addition, every party member's JUICE can be increased by 5 points for every new CLUB SANDWICH that the party lodges at.

OMORI can also gain an extra boost of 50 HEART, 50 JUICE, 10 ATTACK, 10 DEFENSE and 10 SPEED by accepting the sacrifice offered by the BRANCH CORAL within the DEEPER WELL area. The sacrifice involves eating an red apple that morphs itself into SUNNY's head. Doing this action has no impact on the story.

For an in-battle description and his boss quotes, see: OMORI (Enemy)

Omori blankly staring as he joins the group hug.

"Your friends smile warmly behind you."

Omori staring at a mirror alone.

Omori lying on the surface of White Space.

Omori manifesting himself in White Space.

Omori ominously sets himself on his throne.

Omori staring at a mirror at daytime.

Omori staring at a mirror at night.

Omori from the title screen.

Omori did not succumb.

Omori will not succumb. 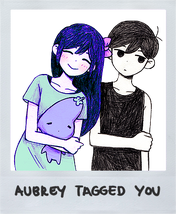 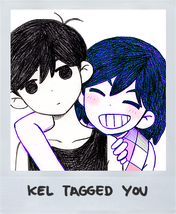 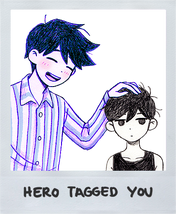 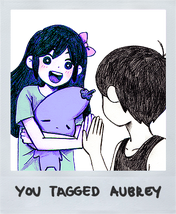 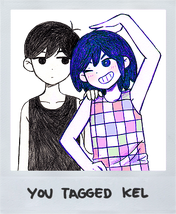 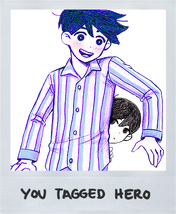 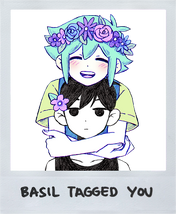 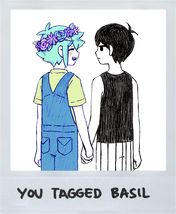 "MARI is teaching everyone how to make flower crowns! OMORI and KEL are holding MARI's example. So pretty..."

"MARI had HERO take a picture of us. Everyone thinks a flower crown really suits me."

"We're having a picnic today! MARI wanted to take a picture of everyone. Say cheese!"

"After eating, everyone fell asleep, except HERO and MARI. I'm getting kind of sleepy myself."

"All of our feet in a circle! can you guess whose feet are whose?"

"My best friends... KEL, AUBREY, HERO, and OMORI! I'll cherish them all forever."

"We found an old couch in the JUNKYARD! There was only enough space on the couch for four people, but I don't mind. I have the best view in the entire world!"

"We're at the LAST RESORT! KEL keeps losing at slots. He should really learn when to stop."

"We stopped by the MUSTARD SUB for some grub! COMBO MEALS for everyone!!" 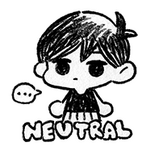 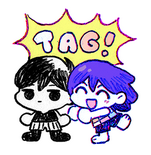 Omori lying on the ground with his eyes closed, also used when entering Lost Library for the first time.

Omori blinking while crouching down, only used in the Black Playground area.

Omori clutching his stomach, using frames from the STAB animation.