PUNISHMENT AREA also known as CAT DISSECTION[1], is one of the many locations found within BLACK SPACE in OMORI. It is the sixth mandatory location the player must progress through to complete BLACK SPACE.

The PUNISHMENT ROOM takes on the appearance of small, dark room with a few window openings that reveals a looping background of a creature's ribs. There are four shelves filled with unknown chemical substances and BUTLER stands right beside them on the right.

MEWO also appears in this area but strapped down to an operating table filled with dissecting tools. A light also appears to be shining down on the table. Other than that, OMORI only has two options in this room depending on the player's choices. He can either cut open MEWO then obtain the key or simply ignore MEWO's presence and getting the key from BUTLER without any trouble.

There is no obligation that OMORI must cut open MEWO to exit the room. Along with that, this area is the only BLACK SPACE area where the key doesn't have to be collected as no RED HANDS will spawn upon doing so.

After finding a BLACK KEY within the BACKYARD AREA, OMORI is warped back to the center hub of BLACK SPACE. From there, OMORI enters another door, which leads him to an small room featuring BUTLER standing by the entrance and MEWO strapped down onto an operating table with several tools in the middle of the room. STRANGER once again doesn't show up in this area.

Interacting with BUTLER will have him tell OMORI that MEWO "has been very, very bad." If the player interacts with him again, BUTLER will give them a key and the option to stab OMORI. Heading over to the table with MEWO provides the player with a prompt to cut her open. Choosing "YES" will do nothing, but continuing to interact with MEWO and pressing "YES" will show different dialogue as MEWO begins to panic, before ultimately cutting her open.

Interacting with the BUTLER after killing MEWO will give you the prompt "Waiting for something to happen?". It is entirely possible to leave the room without killing MEWO by opening the menu and choosing to stab OMORI. Using the STAB command is the only way out of the room as no RED HANDS will spawn after collecting the key. Upon stabbing himself, OMORI warps back to the center hub of BLACK SPACE. 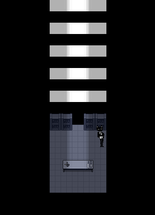 A full view of the Punishment Area with no background. 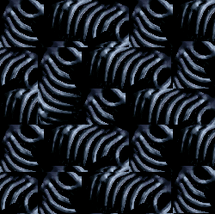 The background used for the Punishment Area.