RAIN AREA, also known as SAFE SPOT[1], is one of the many locations found within BLACK SPACE in OMORI. It is the second optional BLACK SPACE area.

The RAIN AREA is a barren, rainy wasteland filled with dry trees and pink ground, and a few tuffs of grass sticking out. Following the path will eventually lead you to STRANGER and the key next to a lamp-post and a single daisy underneath it. Around the world are discarded objects, including a lamp and a jump rope. The atmosphere here is rather calm and almost quiet.

One can also encounter a large disembodied MARI head nearby, who can be interacted with to tell OMORI to expand his mind. Doing this eight times will cause her brain to enlarge and crush her. Like the other rooms, obtaining the key will cause RED HANDS to spawn and teleport OMORI back to the BLACK SPACE center hub.

When OMORI enters this room, he finds himself in a peaceful, yet somber area that is constantly raining. He can explore the place but the only way to progress is by following the dark-colored footprints. Eventually, OMORI reaches an area where STRANGER awaits him and the key near a single lamppost. Talking to STRANGER is optional as usual.

If interacted with, STRANGER will strangely address OMORI as SUNNY once again. He then tells "SUNNY" that he misses him and refers to him as someone he could depend on to listen to his issues. STRANGER remarks that "SUNNY" knew all of his problems, hopes, and dreams. He ends the dialogue by pleading for "SUNNY" to hear out his words one more time before disappearing.

OMORI can also interact with another NPC known as MARI?, a giant head resembling MARI's with a huge brain coming out of the top. After collecting the key, several RED HANDS will spawn and interacting with them will take OMORI back to the center hub of BLACK SPACE. 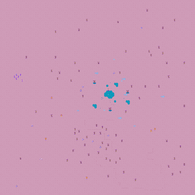 A full view of the Rain Area with no background.