RAIN TOWN is an optional location in OMORI. It is a rainy town filled with multiple VEGGIE KIDS harvesting themselves. It is accessible from a pond in ORANGE OASIS' CENTER HUB. 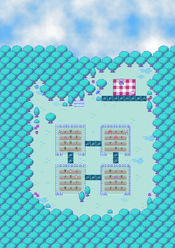 RAIN TOWN is a small grassy area that houses many VEGGIE KIDS. Within the town, there are four small plowed fields which are fenced up and arranged into a square formation. VEGGIE KIDS and what are presumably saplings of VEGGIE KIDS are planted within these fields. Puddles are present on the ground from the constant rain. A thick forest of trees acts as the boundary of the area.

In the top right, MARI and her picnic blanket can be found. Further to the right of the picnic blanket is a valve that can control the rain intensity of RAIN TOWN, but can only be turned by the Chosen One. If the player chooses the turn the valve to the right, then the atmosphere becomes more refreshing as less rain pours down on this area. However, if the valve is turned to the left, RAIN TOWN will be flooded by BLACK SPACE's dark energy.

This will also render the place inaccessible for the remainder of the game. However, it can still be revisited on ONE DAY LEFT of the OMORI ROUTE. When revisiting, the entire atmosphere of the town is dark and gloomy while it rains much harder than it had before. Along with that, all of the VEGGIE KIDS there are implied to have transformed into LILLIS according to the game's data. The only option from there is to either fight the LILLIS or simply leave the place to rot.

RAIN TOWN is an optional area that can be accessed by interacting with the pond in ORANGE OASIS. OMORI and friends can speak to the VEGGIE KID in the middle of the town, who tells them that although the rain in RAIN TOWN is now slightly uncomfortable for them, only the Chosen One is able to turn the valve to adjust the rain. This begins the quest RAIN TOWN.

If OMORI and friends turn the valve to the right, the rain lightens, and the same VEGGIE KID thanks them. Another VEGGIE KID decides to join them in their adventure as a charm.

If OMORI and friends turn the valve to the left, the rain severely worsens and floods RAIN TOWN, and RAIN TOWN is never seen again. This renders the area permanently inaccessible, unless you are in the OMORI ROUTE then you will be kicked out. Upon reentry, the place will be flooded with the SOMETHING variant, LILLI.

In reference to the original OMORIBOY comics by OMOCAT, sitting in the leftmost center field in an empty patch as solely OMORI results in him sitting down and becoming a potato after about nine seconds. This is a direct reference of one of the comics, titled "life would be so much better if I didn't look like a potato."

The valve the group can turn to receive an outcome that determines the fate of this area. 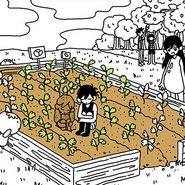 Omori's sprite when transforming himself into a potato.