RED MAZE, also known as HAUNTED TREES HANGING MAZE[1], is a secret location in OMORI. It is an expansive red maze located within the depths of BLACK SPACE 2, holding a horrifying reminder of the truth.

The RED MAZE can be accessed from the northeastern DOCKS. A hidden pathway via going up from the middle of a bridge and then following blindly upwards is the way to access it. From there, OMORI can wander through an endless maze where some floating pieces of TOAST move around. One of the ten "Fear Polaroids" can be found here as well, located east of the SMALL ROOM WITH A LADDER subarea.[2]

Touching the floating pieces of TOAST within the RED MAZE will transport OMORI into a different section of the maze populated by hanged MARIs. Touching any of these MARIs will drain OMORI's HP. After 30 seconds, they will turn into disturbing, realistic, distorted versions of MARI that will loudly screech and drain more HP when coming into contact with OMORI. After that, when a period of 15 seconds passes, there is a 50% chance that you may get dialogue stating "Look at what you've done." randomly in the main area. By going down the ladder in the maze and progressing forward, you will encounter DADDY LONGLEGS sitting in a chair, who warns OMORI to "go back before it's too late".

Continuing forward will gradually cause the music to shift in tone and eventually present you with a red, pulsating room. Walking further into the darkness causes a ghastly MARI apparition (dubbed "HELLMARI" in the game files) to follow OMORI around. To leave this entire area, OMORI can simply climb back up using the ladders or stab himself to warp back to THE DOCKS. 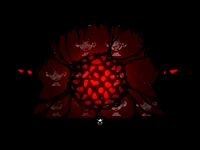 The FACES OF OMORI is a dark, looping area featuring many of OMORI's faces. There are also two giant OMORI heads glaring down at the player with a large orb of darkness that appears three times. It is accessed by entering the ladder on left of the RED MAZE. Doing so will transport OMORI into this distorted area.

All OMORI can do is either move left or right to exit the room, which will bring him back to the RED MAZE. This area can also be accessed through LAST RESORT (see ALTERNATE ENTRANCE). Regardless, the area where OMORI will be sent back to upon exiting depends on which method the player used to get there.

SMALL ROOM WITH A LADDER 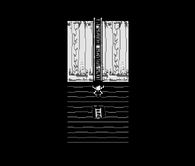 The SMALL ROOM WITH A LADDER is a series of endless rooms that can be progressed by going the ladder forty one times total. It can be accessed by entering the ladder on right side of the RED MAZE. Doing so transports OMORI to a single room with a ladder leading downwards.

Since going down will simply repeat the room, one must take caution of what they're doing here. Heading down nineteen times will reveal DADDY LONGLEGS, who will tell OMORI to turn back before it's too late. Regardless, if OMORI continues heading down another nineteen times, he will encounter a toy box that cannot be interacted with.

If the player chooses to ignore DADDY LONGLEGS' warning by heading down three more times, this will bring OMORI to a darkened room. From there, HELLMARI's giant floating head emerges from the darkness. To exit this area, OMORI can climb back up to the maze.

The ROOM WITH HELLMARI consists of a darkened room. This is accessed by entering the SMALL ROOM WITH A LADDER segment forty-one times as mentioned before. At first, nothing will happen upon arrival for a few seconds.

HELLMARI's giant disembodied head will then descend from the top of the screen, revealing herself to OMORI without making any screeching noise. In addition, she will cause the screen to briefly shake, though this is hard to see due to the dark screen. HELLMARI's head will always follow OMORI but the latter can simply leave the area to prevent more of HELLMARI's creepy antics. 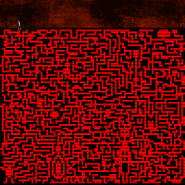 A full view of the Red Maze. 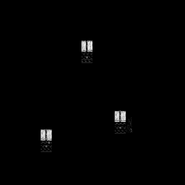 Small Room with a Ladder.

The background used for the Red Maze.

The background used for Faces of Omori. 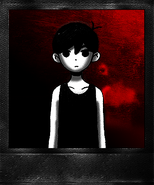 The Fear Polaroid that appears within Red Maze.