This page is about RED SPACE. For the area where one can enter the RED ROOM on the SUNNY ROUTE, see MARI IS HOME.

RED SPACE is a hidden location in OMORI, connected to BLACK SPACE. It is an eldritch location where OMORI sometimes visits on rare occasions when needed to repress the truth.

Formally, RED SPACE is a place where the "THRONE OF HANDS" is, right after the CHURCH OF SOMETHING encounter. The map where OMORI ascends the RED HAND staircase is internally called "RED SPACE" in the map files, confirming this theory.

However, that specific area is not accessible by means other than the short cutscene that pans out without player control. There exists another small area OMORI can visit through very convoluted means, which is slightly visually different than the original RED SPACE and features a much larger area to explore. There is a second way to access RED SPACE, however, it does not offer the exploration the SUNNY ROUTE way does.

The RED ROOM alongside MARI IS HOME is probably the most convoluted and secretive area to get to in all of OMORI. It not only requires you to open the door for KEL during THREE DAYS LEFT segment, but to also access THE DOCKS. Here are a full list of steps on how to get to MARI IS HOME without resetting HEADSPACE, from beginning to end:

You can also access MARI IS HOME when you open the door of SUNNY's house to meet KEL at THREE DAYS LEFT, but not open the door and go to sleep at TWO DAYS LEFT and go to BLACK SPACE 2 after refighting the three SOMETHING variants in OMORI ROUTE.

At this point, you can explore around SUNNY'S HOUSE as mentioned above. When you want to get to RED ROOM, go to the piano room and down the ladder. Make sure to let MARI in, unless you intentionally want to see the event where she chases you.

Upon entering BASIL's SOMETHING in the CHURCH OF SOMETHING, OMORI finds himself inside of a strange dark room, where BASIL stands next a red window. BASIL notices that something's out there, noting that its calling both him and OMORI. After conversing briefly, the window opens and several RED HANDS emerge to grab BASIL, dragging him away further into the darkness.

OMORI follows them and enters RED SPACE. There is also a blood trail revealing blood from some of BASIL's fingers being torn off from his hands when the former was being dragged into RED SPACE. From there, OMORI ventures through the location and finds BASIL restrained by four RED HANDS. BASIL begs for forgiveness but OMORI doesn't respond. Knowing that BASIL has learned too much about the truth behind MARI's death, OMORI refuses to let him go.

OMORI then commands the hands to lower BASIL down and proceeds to stab him, killing him in the process. He coldly walks over BASIL's corpse and ascends the stairs, reaching his throne of hands. OMORI sets himself on his throne, turning around to look at the player as he becomes more distorted than before. The screen closes in on OMORI's distorted face as SUNNY wakes up afterwards.

When SUNNY gets overwhelmed by the STRANGER's wrath in BLACK SPACE, he immediately gets transported to the main area of RED SPACE. With no where else to go, SUNNY tries to move forward but is too weakened by his ongoing despair. All the player can do when controlling SUNNY is to move north to find OMORI. He eventually collapses out of sheer guilt over his actions at the foot of the staircase to OMORI'S throne.

Witnessing his original self's struggle, OMORI decides to lend him a hand once more. He descends from his throne and steps forward to help SUNNY face the STRANGER. Upon getting warped to same dark room where STRANGER awaits, OMORI finds out that the latter has given up on trying to convince SUNNY to change his ways. A RED HAND then manifests and teleports OMORI back to the CHURCH OF SOMETHING, allowing him to finally rescue BASIL and escape back to HEADSPACE.

The main area of RED SPACE consists of a red-colored dimension featuring multiple RED HANDS roaming around the area. This is also where OMORI's THRONE OF HANDS is located. The most notable feature of the main area is the staircase that leads all the way to the THRONE OF HANDS. Many fragments of this area are later used for OMORI's boss battle background.

When climbing up the stairs, the background shown first features glimpses of SUNNY's backyard and the night sky, reminiscent to the time when he and BASIL hung MARI. The upper area consists of multiple realistic RED HANDS surrounding the throne, and when looking at the full map, a large clump of black hair hangs from above.

RED ROOM is a special subarea of RED SPACE, which can be accessed through MARI IS HOME. It features the same background RED SPACE uses and contains multiple stumps with knives stabbed in various places, as well as flower crowns resembling BASIL's crown. The entire layout of this map presumably references the tree MARI's body was hanged on, BASIL's status with this tree, and the birthplace of SOMETHING.

Directly north of the first stump encountered is an invisible ladder that takes you to a zoo filled with various containment chambers of minor SOMETHING variants. The player can walk around the SOMETHING zoo while observing the SOMETHING variants. Moving to the top corner of the room will play a special noise with several tendrils start surrounding the screen as it becomes darker. Heading away from that corner will simply make the tendrils disappear.

The SOMETHING variants will try to move towards the player but they can't attack the party since they're trapped in their cages. Even if one tries hacking the party into the cages to interact with the SOMETHING variants, nothing will happen as they weren't programmed to fight in this area.

During the OMORI ROUTE, a player may access RED SPACE another way; at SWEETHEART'S CASTLE, in front of the KEEPER OF THE CASTLE's room, there is another room with what seems to be a grate emitting red light in the middle. When OMORI is tagged as the leader of the team, standing facing the grate for a few seconds will teleport OMORI to a place reusing what seems to be RED SPACE's background.

However, there is only one path here, forward. Walking forward will eventually let the player encounter SUNNY, who wordlessly turns around and leaves the screen. Continuing walking forward will teleport OMORI back to the grated room. This is a one-time only event. 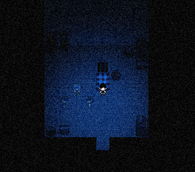 Omori setting himself down on his throne.

Omori sitting on his throne of hands.

The sprite of Basil's corpse as it appears in the area's background.

The Throne of Hands.