REEF AREA, also known as INCUBATION[1], is one of the many locations found within BLACK SPACE in OMORI. It is the ninth optional BLACK SPACE area.

The REEF AREA is a world vaguely resembling DEEPER WELL but with a more reddish tint. The heads of OMORI's friends are shown sticking out of the walls, as well as swimming in small pools behind. Some of them also appear to be sprouting out from the ground, glitched out. The background is a distorted, glitchy version of the realistic RED HANDS seen in RED SPACE.

When OMORI enters this room, he finds himself an area filled with reddish water and coral objects, resembling DEEPER WELL as mentioned before. From there, the player can find few mannequins of OMORI's friends stuck inside the walls, swimming in the upper pools, or stuck in the ground. Interacting with the ones in the walls will prompt the text "______ is here", "______" being whoever you interacted with.

The key is located nearby under a hanging piece of coral. After collecting the key, several RED HANDS will spawn and interacting with them will take OMORI back to the center hub of BLACK SPACE.

A full view of the Reef Area with no background. 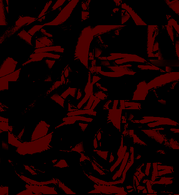 The background used for the Reef Area.