OMORI has two full routes with five known endings, with slight variations depending on the Route. It is best advised to view this page after completing the game for the first time.

The SUNNY ROUTE is the main path of the game. The route takes effect by answering all knocks on the door in SUNNY's house, and participating in the FARAWAY TOWN segments of gameplay. All endings can be attained in this route, with slight variations in each dependent on minor choices.

The OMORI ROUTE is the alternate route where SUNNY decides not to answer KEL's knocking, which leads to him becoming more of a hikikomori than before. He will instead do the chores given by his mother while continuing to deal with SOMETHING. This route notably expands HEADSPACE but doesn't offer a proper conclusion to the story as SUNNY isn't able to explore FARAWAY TOWN and reconnect with his former friends.

If SUNNY chooses to open the door for KEL on all days, this will lead him into the SUNNY ROUTE, also known as the TRUE ROUTE in the game's data. In this route, the story primarily revolves around SUNNY deciding to face reality after spending four years as a hikikomori before moving away in four days. Most of the story takes place in FARAWAY TOWN.

Along with that, he attempts to reconnect with his former friends while trying to uncover the truth behind MARI's death, which caused the friend group to drift apart in the past. Note that once the player is on this route, the story will diverge from the HEADSPACE segments and become more focused on SUNNY's journey to move on from the past.

The SUNNY ROUTE endings can be attained by fighting BASIL in his room after waking up in BASIL's house. After SUNNY and BASIL fight, they're both knocked out and sent to the hospital. While unconscious, SUNNY meets OMORI in WHITE SPACE and battles him for control one last time. It is impossible to win the fight against OMORI. However, after OMORI manages to overpower SUNNY, this will result in an unique game over screen, allowing the player to either continue or not continue.

If the player chooses to continue after dying, the fight with OMORI will continue. SUNNY's attacks will be replaced with the PLAY option, allowing SUNNY to play his duet with MARI, which was planned to be performed at the recital on the day she died. After the performance, OMORI loses the battle for control of SUNNY's mind and disappears.

SUNNY then wakes up in the hospital and begins to cry, before getting up in a room surrounded by various flowers delivered by the townsfolk. Exiting the room prompts SUNNY with ghostly apparitions of both the HEADSPACE variants of his friends and BASIL's shadow heading off in opposite directions.

Pursuing his friends leads to a door, one of which interacting with leads SUNNY to shake his head in refusal, implying he knows going through it is dangerous. Pursuing BASIL's shadow leads you to his room. SUNNY stands in the doorway before BASIL and his friends, finally being able to tell them the truth. The credits roll as a view of scenery rushing by from SUNNY's car is overlayed by lyrics. 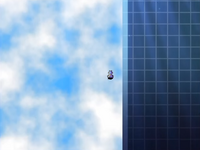 If the player chooses not to retry or continue after dying, OMORI will win control over SUNNY's mind. From there, OMORI wakes up in WHITE SPACE once again. When he enters NEIGHBOR'S ROOM to reunite with his friends, all of them appear strangely silent. However, rather than just leave into HEADSPACE for another adventure, OMORI finds himself in SUNNY's body, standing on the hospital balcony. Unable to accept the truth, the only option is to jump, leading to SUNNY falling off the building and plummeting to his presumed death as the credits play.

If the player has made the effort to water BASIL'S flowers consistently during each day in HEADSPACE, an additional cutscene is added after the GOOD ENDING credits. BASIL awakens and finds SUNNY staring back at him.

Both boys gaze at each other and smile as their SOMETHINGs fade away, showing that regardless of how everyone else has reacted, the burden that they have shouldered for four years has lifted and they are both ready to move on.

In the SUNNY ROUTE, the neutral endings can only be attained by choosing to leave BASIL behind after SUNNY awakens in the former's house. In addition, if the player locked onto the OMORI ROUTE, they will automatically get these endings. After sleeping, SUNNY will enter WHITE SPACE as OMORI. The door to the NEIGHBOR'S ROOM will not appear, and the only way to exit WHITE SPACE is through the STAB option. BASIL will always die in the Neutral endings.

Though it does not affect the endings, if SUNNY goes back to sleep in BASIL's house, he will awaken once more to find his friends and POLLY in the hallway, distraught over BASIL's suicide. Opening BASIL's door reveals his corpse slumped against the wall with a large hole in his abdomen represented by SOMETHING.

The only option will then be to return home. If SUNNY already saw BASIL's corpse, a bloody and mutilated version of SUNNY stands atop the stairs, entering SUNNY's room reveals a black mark over the bed. In the OMORI ROUTE, this also happens when SUNNY leaves the piano room at night during the ONE DAY LEFT segment. The rest of the game will then play out depending on if SUNNY picks up the knife or not before going to sleep. 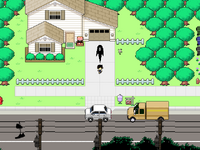 On the SUNNY ROUTE, if SUNNY chooses to resume sleeping in his own bed, this will lead to a repeat of the WHITE SPACE intro scene from the start of the game. OMORI appears in WHITE SPACE as normal, but there is no door to HEADSPACE and the light bulb is still missing. All OMORI can do is STAB himself to wake SUNNY up. This will lead to the MOVING DAY segment, where SUNNY wakes up and is ready to leave FARAWAY TOWN.

On both routes, after exiting his house, SUNNY silently meets his MOM in her car while SOMETHING follows him, leaving his distraught friends behind with no answers. This will lead to a darkened screen as police sirens play over the credits. 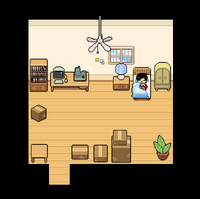 On the SUNNY ROUTE, if SUNNY picks up the knife on the kitchen counter before heading to bed, using the STAB option in WHITE SPACE as OMORI will cause the resulting effects to impact SUNNY's physical body.

SUNNY's answering machine continuously rings as he lays on his bed, clutching a knife into his bleeding chest. This will lead to a darkened screen as the ringing of a phone that will never again be answered plays over the credits.

In the OMORI ROUTE's ONE DAY LEFT and MOVING DAY segments, if SUNNY ignored KEL on THREE DAYS LEFT, an alternate knife ending can take place only if SUNNY chooses to stab himself anytime within his house upon waking up. Doing so will lead to the same darkened screen as shown before. The only difference is that SOMETHING's eyes are shown swarming the screen while the constant ringing of a phone plays in the background.

The OMORI ROUTE, also known as the HIKIKOMORI ROUTE, is an alternative pathway unlocked by refusing to answer any of KEL's invitations to hang out in the real world. Ignore the knocking on the door, and send SUNNY back to bed. SUNNY will take a nap, partially advancing the day, and the FARAWAY TOWN segments from this point on will be replaced with SUNNY doing his chores on the TO-DO LIST to advance the plot. He will refuse to leave the house from here on out.

SUNNY will still be forced to face and overcome his fears, though the hallucinations manifest more abruptly than in the SUNNY route. Sunny passes out and is warped to the confrontation with SOMETHING IN THE WALLS when there's THREE DAYS LEFT, and on the next day he takes a bath, falls asleep and submerges himself in the bath to confront SOMETHING IN THE WATER. The HEADSPACE segments are largely unchanged from the SUNNY ROUTE, until TWO DAYS LEFT. KEL is the one to greet OMORI at the pier and guides him to LAST RESORT instead of MARI, and the trip to DEEP WELL is much shorter due to OMORI not getting guided by MARI'S spirit. 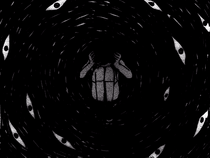 When OMORI reaches the CHURCH OF SOMETHING at the end of BLACK SPACE, he saves HEADSPACE BASIL while the STRANGER scolds him for evading the truth once again. SUNNY gets pulled into BLACK SPACE and the STRANGER forces him into a fight, and after a futile struggle, SUNNY succumbs to despair and struggles up through RED SPACE, where OMORI descends from his throne and "saves" SUNNY from his anguish. The STRANGER gives up, and OMORI grabs BASIL and the both of them escape with the assistance of a HAND. They ascend out of BLACK SPACE to the NEIGHBOR'S BEDROOM, and OMORI goes to sleep to restart his adventure.

OMORI takes over SUNNY as he begins his final day going through the last of his chores before MOVING DAY, being silently tormented by SOMETHING all the while. Once you begin ONE DAY LEFT in the reconstructed HEADSPACE, OMORI reunites with his friends. They repeat the same dialogue from the very start of the game, and OMORI heads into the empty FOREST PLAYGROUND to greet MARI and BASIL. This time, BASIL remains in the sanctity of MARI's picnic blanket, safe from ever discovering BLACK SPACE again.

From this point on, the entire HEADSPACE is yours to explore at your leisure. You can revisit areas to find new things to do, new sidequests to complete, new bosses to face, and new equipment for the party. SNOWGLOBE MOUNTAIN and THE ABYSS are exclusive to this route, and if you conquer all three phobia-based SOMETHINGS you get to explore BLACK SPACE 2.

To end the route, Stab while in WHITE SPACE to awaken in SUNNY'S house. You can go back to your bed and choose to sleep till MOVING DAY. Only the neutral endings are available to you here.

Sunny recovers his broken violin in his dream.

A closeup of the broken violin.

Sunny recalls the moment he got his brand new violin.

Sunny refusing to give up against Omori.

Sunny and Mari have their final duet.

Sunny wakes up crying, coming to terms with Mari's death.

Sunny staring at a hospital mirror.

Sunny ready to confess the truth.

"I have to tell you something".

Sunny is finally able to move on.

Basil smiles back at Sunny.

Sunny overwhelmed by his sheer guilt over his actions.