Drone
SCRIBBLE AREA, also known as LOOPING BLACK FIELD[1], is one of the many locations found within BLACK SPACE in OMORI. It is the third mandatory area the player must progress through to complete BLACK SPACE.

A very empty world full of nothing but an endless dark void and bells. The only residents within this area are crudely drawn sketch figures known as SCRIBBLES and SKELE. Talking with any SCRIBBLE multiple times yields unique dialogue. The key is very easy to find, just follow the path and you'll be led straight to it. As this area is short in length, all OMORI has to do is follow the dark-colored footsteps to retrieve the BLACK KEY to exit the room.

There exists an unimplemented teleport to an unused map titled FUNNY HOUSE through the scribble area, theoretically accessible both in the SUNNY and OMORI ROUTES. It exists just to the left of where you start, north-west of the "candelabra" SCRIBBLE walking around. Despite it's defined call in the events layer of the map, it never triggers for some reason- assumedly because another page in the event causing it to become empty is overwriting it.

It is currently unknown if this is purely a bug, or was cut content that was never removed. There exists no known changes in the FUNNY HOUSE via visiting it through SCRIBBLE AREA. It presumably only exists in the 2019 build of the game. Earlier builds of the game had this unused warp originally link to the CLOUD WALKWAY. 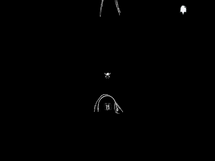 The area where the unused warp could've been used in-game. 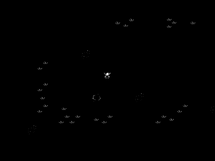 If the warp was still used in-game, Omori would be warped to Funny House, an unused and incomplete map. 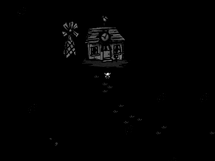 The incomplete house that appears within the unused Funny House map.

After finding a BLACK KEY within the DISCO AREA, OMORI is warped back to the center hub of BLACK SPACE. From there, OMORI enters another door, which leads him to a empty void filled with sketchy figures and skeletons roaming around. Unlike the previous two rooms, STRANGER isn't there to give OMORI one of his cryptic speeches.

Regardless, OMORI can explore the area while interacting with any of the creatures or objects residing in the location while navigating his way by following the dark-colored footprints.

The key is found guarded by three large stick figures upon following the dark footprints. After collecting the key, several RED HANDS will spawn and interacting with them will take OMORI back to the center hub of BLACK SPACE. 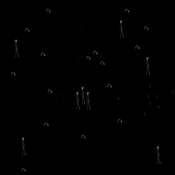 A full view of the Scribble Area map. 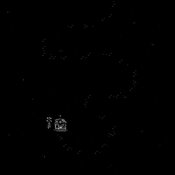 A full view of the unused Funny House map.