5ths
SPIDER AREA, also known as SPIDER FOREST[1], is one of the many locations found within BLACK SPACE in OMORI. It is the first optional BLACK SPACE area.

The SPIDER AREA is a long blue walkway filled with trees and spider webs. The area's overall structure resembles that of VAST FOREST but the colors are all inverted and out of place. There are several spiders roaming all over the ground. OMORI has to first cut BASIL free from a spider web he's trapped in.

From there, OMORI and BASIL can navigate their way through the location. Their movement will soon become slower as BASIL slowly becomes covered by multiple spiders. Eventually, after BASIL gets devoured by the spiders, OMORI can move around freely and retrieve the key by following some red footprints.

There is only one NPC that can be interacted with, that being the giant mother spider found on the top left corner of the area. Interacting with the giant spider will reveal it as dead and one of her offspring has passed away out of sadness. A few floating centipede creatures can be seen wandering around the walkway.

When OMORI enters the room, BASIL is trapped in a spider web, but is freed by OMORI. He follows OMORI as they search for an exit. As they walk however, BASIL decides to mention he wants to talk about something, presumably the truth, which leads to him getting covered in spiders.

The number of spiders continue to increase as they continue to walk, though BASIL denies any risk. They keep increasing until they completely cover BASIL, devouring him entirely. Afterwards, red footprints will lead OMORI to the key. After collecting the key, several RED HANDS will spawn and interacting with them will take OMORI back to the center hub of BLACK SPACE. 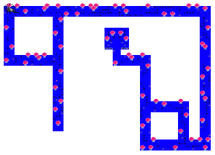 A full view of the Spider Area with no background.

Basil slowly getting eaten alive by the spiders that slowly surround him.

Basil getting completely devoured by the spiders.

The corpse of the Mother Spider.

The centipede creature from the Spider Area.