SPROUT MOLE VILLAGE, also known as SPROUT MOLE TOWN, is a location in OMORI. It is a large village housing a majority of HEADSPACE's SPROUT MOLES who migrated from OTHERWORLD's SPROUT MOLE COLONY. This area is also found at the end of the PYREFLY FOREST and connected to SWEETHEART'S CASTLE.

Unlike the SPROUT MOLE COLONY from OTHERWORLD, the SPROUT MOLE VILLAGE is more two-dimensional in appearance. It features multiple areas where many SPROUT MOLES are shown doing their typical activities. Each one will mostly speak out a random quote or prompt a question for the party to answer. Each room in general features an unique aesthetic and several multicolored plants hanging on top of the ceilings.

This area houses the most SPROUT MOLES that show up throughout the entire game. The player can explore this location while obtaining items from watermelons and the TOFU JASH. They can also accept do certain sidequests to obtain special items along with fighting an optional mini-boss located in the area's depths.

After putting the plug back in, the power is restored. HERO is then chosen to replace the third contestant, but the party is thrown into THE DUNGEON after HERO refuses a smitten SWEETHEART's marriage proposal. The entirety of SWEETHEART'S CASTLE is presumably somewhere in SPROUT MOLE VILLAGE. 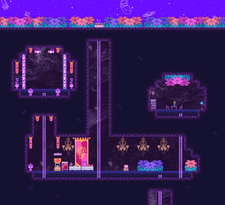 Upon climbing the ladder from the entrance, the party will be taken to the first area SPROUTMOLE TOWN 1. From there, they can find MARI standing right next to the ladder with her picnic. Interacting with her the first time around will prompt her to give the party some TOFU she bought at a TOFU stand while talking about the SPROUT MOLES. The party can save and heal up in this area as well. On the far right corner stands SHADY MOLE, who is plotting something to himself. After the player defeats SWEETHEART, SHADY MOLE's sidequest will be available to the party, which involves bringing an B.E.D. to him.

Heading left will lead to a short cutscene where the group shows a SPROUT MOLE their SHOW TICKETS, gaining access to SWEETHEART'S CASTLE STAGE. Climbing up the left ladder leads to the entrance of SWEETHEART'S CASTLE STAGE with PESSI standing beside the door. Interacting with him will show him speaking about his obsession with SWEETHEART. If the player defeats SWEETHEART, PESSI's sidequest is available to complete, involving having to search for his missing prized possession stolen by ROSA.

The upper right room features two FAMILY MOLES, one of them discussing about the history of this area while other simply mentions his hatred of Mondays. BROTHER MOLE is also found there, and talking to him will prompt him to ask the group to help him deliver a CARE PACKAGE to his brother in SPROUT MOLE COLONY. Accepting to help him leads to his sidequest, which can be completed by heading over to CATTAIL FIELD to enter SPROUT MOLE COLONY once again.

On ONE DAY LEFT of the OMORI ROUTE, if the player accepts the KEEPER OF THE CASTLE's offer, this will lead to the complete erasure of SWEETHEART'S CASTLE and everything it contains. The entrance to the castle will also be replaced with a glass door that leads to a peaceful living room known as the BORING ROOM. This cannot be done and is permanent, unless the player has a save file before doing the event. 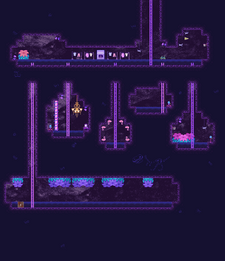 SPROUTMOLE TOWN 2 is accessed by taking the left ladder from the third area. It also features various rooms housing some SPROUT MOLES. One of the JOKE BOARDS for the JOKE BOOK can be recorded here too. A SPORT MOLE can be found exhausted, and only after talking to MAYOR MOLE prompts the former to ask the party for a piece of TOFU. Giving him TOFU completes the SWEATY THING sidequest, and obtaining the BIG AIRHORN.

Nearby the JOKE BOARD is a room featuring a Christmas tree and BOX MOLE. Cutting down the tree yields the Christmas Crusher achievement and allowing the party to obtain a PRESENT behind it. The bottom right room is where SLEEPY MOLE resides, and can only be awakened by using the BIG AIRHORN given by SPORT MOLE. ROSA is also in one of the bottom rooms, entering her room is necessary to complete PESSI's sidequest.

Heading downwards using the left ladder reveals an exercise room where WARDEN MOLE is watching over several SPROUT MOLES running on treadmills to keep the VILLAGE's power up and steady. There are two interactable objects there, a floating mirror that shows the group's reflection and an sparkle on one of the treadmills. Touching the sparkle leads to a short event where the group is shown running on the treadmills, with HERO being the only one exhausted at the end. The far end reveals an outlet that needs to be plugged in when the power goes out in SWEETHEART'S CASTLE and the VILLAGE during the first visit.

Accessed by taking the bottom right ladder from SPROUTMOLE TOWN 1, SPROUTMOLE TOWN 3 features multiple SPROUT MOLES doing their usual antics. To the right features a SPROUT MOLE class where a TEACHER MOLE is lecturing his STUDENT MOLES on some "mumbo-jumbo". A DUNCE MOLE is also shown facing the wall at the back of the class.

To the left features four doors the size of a SPROUT MOLE. Continuing in that direction reveals another ladder leading deeper into the SPROUT MOLE VILLAGE, next to it is another ladder leading up to TOFU JASH's shop. The far left end reveals a kitchen, where two SOUS CHEF MOLES argue about which flavor of TOFU is better. Interacting with them will prompt HERO to try to resolve their argument, only to receive backlash from both MOLES. The CHEF MOLE standing on the far left offers trivia on TOFU if the party accepts learning more about it.

The upper left room is where the TOFU JASH will sell some TOFU to the party for 1 CLAM. Buying endless amounts from the TOFU JASH is quite useful if the player wants to acquire a total of 99 TOFU to receive the Mmm... SWEETHEART, I mean, TOFU achievement. There are two ladders that leads downwards into a different area depending on which ladder the party takes. 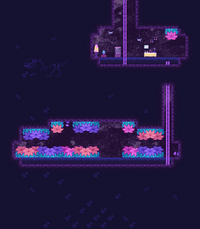 The last area SPROUTMOLE TOWN 4 is where MAYOR MOLE is residing along with KING CARNIVORE, who is located at the bottom depths guarding three watermelons. Interacting with MAYOR MOLE will prompt him to ask the party to find his son SLEEPY MOLE, who needs to bring back his latest creation, the B.E.D.. Doing so will allow the party to obtain the item after finding giving SPORT MOLE one TOFU and later using the BIG AIRHORN on SLEEPY MOLE.

As for KING CARNIVORE himself, the group has two ways to defeat this carnivorous creature. The easy way to defeat him involves OMORI cutting the anvil cord above him, killing him without any struggle and giving access to the loot he guards.

However, this will prevent the group from earning his FOE FACTS! entry as killing him prevents a full 100% completion of the journal. If the player decides to confront him directly, this will result in an optional mini-boss fight. Defeating him will allow the group to access the watermelons located right behind him and also a drastic boost in EXP as well. These watermelons contain ORANGE JUICE, COMBO MEAL, and LIFE JAM. 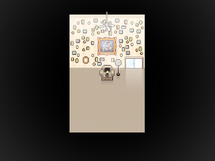 "Your friends smile warmly behind you." 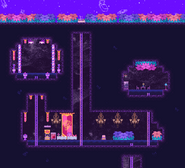 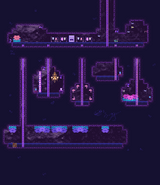 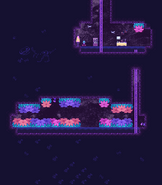 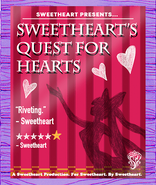