Friendsssssss.
STATIC VOID is a hidden location in OMORI. It is a glitchy dimension that showcases the horrific outcome of what happens to any HEADSPACE denizen that stays too long in BLACK SPACE. 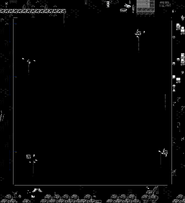 The STATIC VOID takes on the appearance of large room filled with many BLACK SPACE aesthetics. The outside part of the room features numerous objects from both BLACK SPACE and BLACK SPACE 2.

It can be accessed by having UNIVERSAL REMOTE equipped on OMORI and interacting with the TV next to BATZY in SPROUT MOLE COLONY, only properly available on ONE DAY LEFT of the OMORI ROUTE. It was also originally accessed through a black door that appears in THE DOCKS, though this warp has been removed in current builds of the game.

Some of them include a monochrome-colored watermelon and an dark LIGHT BULB reminiscent of the one from WHITE SPACE. There are also various pinwheels from CLOUD WALKWAY that surround the area's interior. A giant tv screen located at bottom middle of the room is shown flashing a dark, red light. Several play structures from BLACK PLAYGROUND along with a ladder up north are shown as well.

The most notable aspect of this area are the multiple glitching NPCs that change rapidly and rotate endlessly. These ones cannot be interacted with. The only NPC that can be interacted with is YE OLD SPROUT, the tutorial boss encountered during the first visit to BASIL'S HOUSE in VAST FOREST. Talking to YE OLD SPROUT will simply lead him to coldly mention that OMORI killed him.

Other than that, when the screen darkens, all NPCs will stop glitching and transform into one of the SOMETHING variants known as MERCI. Touching any of them will simply warp OMORI out of this area. This can be seen more clearly in the game's data or brightening the screen up.

Once the screen goes pitch black and the NPCs are transformed into MERCIS, a single hidden door will appear within the upper corner of the map. This door is hard to find due to the darkened screen obscuring the player's view from entering the door. Once OMORI finds and enters the door, he will be brought to the DOCKS, also known as the WATER WALKWAY in the game's data.

Despite the area being originally planned to have multiple doors, this single door left here is most likely an oversight or bug left by the developers themselves. This can be done on an OMORI ROUTE or MIXED ROUTE, as the STATIC VOID is inaccessible on the SUNNY ROUTE. 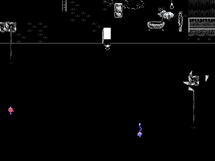 The hidden door that brings Omori to the Docks, also known as the Water Walkway. 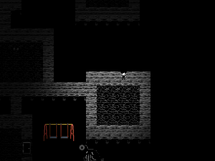 Omori finding himself within the Docks after using the door within Static Void.

Note that not all characters are listed here due to the constant sprite glitching of the HEADSPACE NPCs. 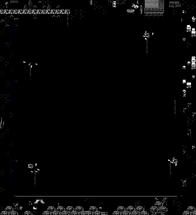 Full map of the Static Void.