STRANGERS are a group of characters and NPCS in OMORI. They serve as mysterious, cryptic entities that occasionally appear before OMORI and his friends in HEADSPACE. Most of them seem to know about the truth regarding the game's plot.

STRANGERS can differ in appearance, but the most prominent sprite-set associated with the name STRANGER is one that looks like a silhouette of BASIL. This STRANGER has eerie white pupils and nothing else. Other STRANGERS that appear throughout HEADSPACE occasionally take on the form of people that SUNNY knows from his childhood. These notably consist of AUBREY, KEL, HERO.

A STRANGER with a different sprite can also be found on the TRAIN, bearing similarities to the BASIL sprite with its white pupils and silhouette body but having different hair than BASIL. When in battle with STRANGER on the OMORI ROUTE, a manifestion of BASIL'S SOMETHING that it uses has the same teeth and tendrils from BASIL's battle.

Personality-wise, STRANGERS tend to be perceptive and cryptic - they point out to SUNNY about the consequences of his actions alongside passing abstract messages. However, the STRANGER with BASIL's silhouette shows a bitterness and aggression toward SUNNY during their battle, citing SUNNY's refusal to face reality as reasonable grounds for trapping SUNNY inside the dream. STRANGER also starts talking from BASIL's point of view during the battle, which implies similarities between STRANGER and BASIL's mindsets.

Comparing to the real world BASIL, the STRANGER BASIL displays less anxiety and talks in a manner that is often measured. The STRANGER BASIL is also less prone to be as expressive as BASIL, but still shows concern about how the future will play out from SUNNY's actions. There is an implied concern for those living in the dream worlds since STRANGER asks for mercy on the dream residents. Despite both being somewhat based on real life BASIL, the STRANGER BASIL considers both dream and real BASIL to be separate entities from itself, referring to BASIL as SUNNY's friend or flower boy instead.

Throughout the game, STRANGERS appear in SUNNY's memories presumably as placeholders for SUNNY's thought processes. They start to directly appear right after BASIL vanishes from HEADSPACE, serving as a marker for where to go next in the story.

Note that whenever OMORI and his friends encounter a STRANGER, the shadowy entity will usually turn around to silently face them before vanishing without a trace. They often can be seen using BASIL's appearance to help guide the group to certain areas necessary for plot progression and to uncover the truth behind HEADSPACE's existence.

The first STRANGER that can be encountered is within VAST FOREST's FOGGY BRIDGE, only if the group hasn't reached OTHERWORLD yet. From there, STRANGER is shown in an unreachable area near the R Key. This area can later be accessed through a ladder found in LAST RESORT's construction site.

After helping the lovesick CAPT. SPACEBOY in OTHERWORLD, the group still has no clues on BASIL's whereabouts. However, OMORI ends up discovering a trail of red footprints, which brings him and his friends to STRANGER, who is waiting for them. Without saying anything, STRANGER turns around and heads west. OMORI follows STRANGER into the CATTAIL FIELD but ends up getting separated from his friends.

The area has changed significantly, as it's populated with objects hinting at vague memories of SUNNY's past with his friends. He is also guided to the previously-locked CATTAIL BARN by STRANGER, which now has a red glowing light illuminated inside. Once OMORI enters the barn, he discovers a large pink photo frame, in which STRANGER vanishes right in front of it.

The following day, STRANGER once again manifests in various HEADSPACE locations to guide OMORI through the dreamy landscape. Near the entrance to the LOST FOREST, STRANGER can be encountered there if the player hasn't collected the W Key. Various STRANGERS also appear as passengers in VAST FOREST's TRAIN to ORANGE OASIS, and end up being turned into TOAST after the group vanquishes a lone DOROTHI.

After defeating SWEETHEART within her castle, a large hole is opened on the stage via detonation. Once SWEETHEART leaves with CAPT. SPACEBOY on their honeymoon, the group prepares to leave the place. However, OMORI senses an ominous presence behind him. Turning around, he sees STRANGER walking right into the hole. The group is then guided straight into the hole by the shadowy entity.

As the others disappear while falling down, OMORI enters LOST LIBRARY all by himself. If OMORI chooses to read all six library excerpts available in the library, a hidden piano room located southeast can be accessed. Inside that room, STRANGER is shown staring at the piano, not before turning around to face OMORI and silently vanishing as usual. Like with the LOST FOREST encounter, this can be shown if the W Key isn't collected yet.

STRANGER also appears behind the sliding glass door in SUNNY'S HOUSE, and vanishes when SUNNY approaches him.

As OMORI and his friends reach the end of their journey, STRANGER makes a few more appearances in HEADSPACE using the form of BASIL to guide the group. In DEEPER WELL, STRANGER can be found sitting on the swing that BRANCH CORAL is holding before vanishing. He later shows up at a walkway in MARINA's sector in HUMPHREY, staring at a disheveled FLOWER CROWN that once belonged to BASIL. Upon noticing OMORI and his friends approaching him, STRANGER disappears as they slowly forget about BASIL in the following cutscene.

Once the group collects all necessary HANGMAN Keys to progress, the surroundings of BASIL'S HOUSE become deathly and foreboding, and its floor caves in, revealing the entry to BLACK SPACE. When entering the disoriented house after going through the PATH TO BASIL, STRANGER is shown walking directly into the hole, with the intent of guiding OMORI to BLACK SPACE.

Many STRANGERS appear and walk around in BLACK SPACE; interacting with them will give OMORI one of many cryptic lines of text that relate to SUNNY's current situation. The STRANGER BASIL appears in several rooms, mostly to warn OMORI of something ominous in the background or presumably echoing thoughts from the real BASIL. STRANGER's last major appearance is within the CHURCH OF SOMETHING, in which his encounter there ultimately depends on the route the player is on.

On TWO DAYS LEFT, various STRANGERS can be seen roaming around or hovering over the waters of NORTH LAKE as OMORI and MARI venture through that area. Most of them resemble people from SUNNY's past, and cannot be interacted with as going near them will cause them to immediately vanish.

By the time OMORI arrives in the CHURCH OF SOMETHING, STRANGER appears before him and says that it's about time that SUNNY finally faces the truth behind MARI's death before fading into the shadows. From this point on, STRANGER no longer appears to OMORI as his role in helping SUNNY break away from his unhealthy escapism habits as well as uncovering the truth has been completed.

During the aftermath of SUNNY's climactic fight against OMORI, STRANGER can be found one last time alongside the HEADSPACE versions of AUBREY, KEL, and HERO in the hospital. From there, STRANGER will lead SUNNY to where BASIL is recovering and disappears from there.

When OMORI reaches the CHURCH OF SOMETHING, he finds BASIL being held captive by the shadows. He slices them away to retrieve BASIL, only for the STRANGER to appear behind him and berate him for trying to evade the truth yet again. STRANGER disappears, leading to BASIL's SOMETHING fully materializing. The shadowy abomination then lunges at OMORI, causing the screen to distort violently.

Eventually, SUNNY is thrust into a fight against STRANGER in a pitch black void as it demands that SUNNY face it if he refuses to face the reality. The fight with STRANGER is unwinnable as SUNNY'S skills are all interrupted from the sheer stress of it all, and his regular attacks will do nothing. The STRANGER drowns SUNNY in despair, thrusting him into RED SPACE. With nowhere to go but forward, SUNNY collapses at the foot of the staircase to OMORI's throne of hands.

As OMORI steps forward to help SUNNY up, he sees the STRANGER in the black void one last time, who has given up hope in trying to convince SUNNY to change his ways. Without anything to do left, a single RED HAND appears and warps OMORI back to the CHURCH OF SOMETHING so that he and BASIL can finally escape back to HEADSPACE.

STRANGER takes on the appearance of various characters that SUNNY knows from his childhood. The most prominent form it takes on is in the form of his best friend BASIL. Some of them appear to be of unknown identity or simply brief visions of past mirages.

For an in-battle description and boss quotes, see STRANGER (Enemy). 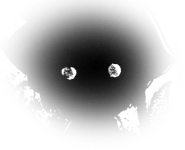 The Stranger that appears in Sunny's House on rare occasions.

Stranger with Basil's Something as shown before his boss fight.

Stranger's torso bisected as shown after his boss fight. 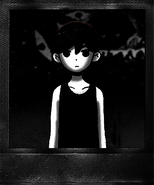 Stranger standing behind Omori in one of the ten Fear Polaroids in Black Space. 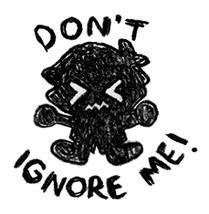 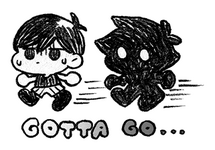 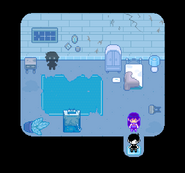