SWEETHEART is a character and enemy in OMORI. She serves as a major antagonist that continuously causes trouble for OMORI and friends throughout majority of the HEADSPACE segments of the game.

SWEETHEART has tan skin and wears frilly feminine clothes (primarily in pink and red) and adorns herself with hearts, bows and polka dots. She has a large pink polka dot bowtie she wears on her head, and long wavy pink ponytails. In battle, she wields a pink flail with a heart-shaped striking head.

SWEETHEART is obsessed with both herself and her image, bragging about her demeanor and appearance often. Her self obsession is fueled by the constant attention she gets from the SPROUT MOLES who make up the majority of her vast fan base. After her breakup(s) with SPACE BOYFRIEND, she begins to become entranced by the idea of true love, and causes havoc trying to find it. She's a very dramatic person and enjoys theatrics, following her every impulse and causing drama for no apparent reason.

She also loves being in the spotlight and has a strong desire to be adored, despite showing disdain for her love-struck fans. When rejected or undermined, she is prone to outbursts and public displays of anger or rage, due to usually getting everything she wants. Her easy lifestyle can lead to her becoming bored, which encourages her to run amuck with various antics that cause chaos for everyone involved (and occasionally those who are not). She is also ruthless, evidenced by her large dungeon as well as the torture room inside it.

When ROCOCO was a baby, he was found by a young DONUT by the name of SWEETHEART. She brought him to her family and they took him in as their own. He and SWEETHEART grew up together. The two fought frequently but SWEETHEART would always win. He became good at running and knew he had to survive to repopulate his species.

SWEETHEART came to the KEEPER OF THE CASTLE a long time ago, a poor girl from the desert and begged on her knees to make the castle hers. The KEEPER OF THE CASTLE gave her what she desired: a castle full of riches, servants for her to command, and a stage for her to flaunt her power. Yet... she still wanted more. The only thing she lacked was her one true love, whom she searched for tirelessly. Eventually, ROCOCO and SWEETHEART fell in love, became engaged, and moved into SWEETHEART'S CASTLE.

As SWEETHEART's fan base grew, the two grew apart. When she began searching for suitors, ROCOCO objected so. When he was asleep, SWEETHEART and her servants tied him up and sealed him inside the walls of her castle, and he had been wandering through the walls ever since. At some point, he decided to become an artist.

One of the game's most visible villains and the main boss of PYREFLY FOREST, SWEETHEART has connections to most of the problems that OMORI and his friends face in the HEADSPACE that aren't related to SOMETHING. The SPROUT MOLES that often menace the party are her servants, her initial break-up with CAPT. SPACEBOY makes him an obstacle to the children, and after her defeat her antics nearly get them killed by the SLIME GIRLS and HUMPHREY. The only incident she doesn't have a hand is when MR. JAWSUM forces the children into contracts.

After being defeated by the party, she is wooed by CAPT. SPACEBOY, whom she finally marries... and then divorces the very next day, believing she can love only another version of herself. She tasks the SLIME GIRLS with creating such a copy, only to reject all of them. Karma finally catches up with her when the SLIME GIRLS demand their payment, which SWEETHEART refuses to give (and couldn't if she wanted to, as she's flat broke after abandoning her castle), which ultimately leads to her unceremonious end at the hands of HUMPHREY. In the OMORI ROUTE, however, it is revealed she is alive, but was forced to be a handmaid of sorts for PERFECTHEART, being renamed to SWEEPHEART to fit into her position.

SWEETHEART's habit of derailing the friends' journey as they search for BASIL is uncanny to the point of frustration -- and very much invoked. With the knowledge that the DREAM WORLD is SUNNY's escape from reality and the truth about MARI, SWEETHEART's role in the narrative of the DREAM WORLD is quite simply to distract the friends from their goal by giving them a villain to pursue, as BASIL is the biggest hint to the truth that SUNNY's subconscious is trying to repress.

Only after SWEETHEART is removed from the equation can SUNNY make any headway, as her exit and the subsequent boss fight with the SLIME GIRLS and HUMPHREY is followed by finding the last required key for the HANGMAN game. She can also be refought in the BOSS RUSH simulator run by BOSS in HUMPHREY, only on ONE DAY LEFT of the OMORI ROUTE.

*This skill will never hit in the HEART and its only variation is 10%. If it is not used, then it'll be automatically skipped.

Additionally, she will do the following actions as their heart gets lower. Note that SWEETHEART's AI during her ECSTATIC and MANIC states is identical to her HAPPY A.I.:

*This skill will never hit in the HEART and its only variation is 10%. If it is not used, then it'll be automatically skipped.

SWEETHEART is a tricky boss that takes full advantage of the EMOTIONS system. Similarly to her ex-boyfriend, she can turn herself permanently HAPPY when she reaches 75% HP, which then escalates to ECSTATIC and eventually MANIC at 50% and 25% HP respectively. If SPACE EX-BOYFRIEND hasn't taught you to diverge away from constantly exploiting AUBREY'S ANGRY HEADBUTTS, SWEETHEART definitely will.

SWEETHEART is a more proactive boss than SPACE EX-BOYFRIEND, capable of hitting multiple party members and having no wasteful actions. Her HAPPINESS raises her speed and crit rate, and her own hit rate is high enough that the apparent drawbacks of HAPPINESS are not very evident. This can become problematic if she's critting your party members before even KEL can move and heal the injured.

While your only source of SADNESS is OMORI, you can stock up on POETRY BOOKS in the shops prior to her fight, so that everyone can gain an emotional advantage on her. Having one or the other is imperative for this fight, as one of her most dangerous attacks is her signature laugh, which can cause everyone in the party to become ANGRY and fight at a disadvantage. If she follows this with a mace swing with her skyrocketing crit rate, your whole party could go from 100% to TOAST if ANGRY isn't removed. You can also have up to two RAIN CLOUDS at this point, one from the JUNKYARD, the other from defeating KING CARNIVORE after rendering it SAD. This mass SADNESS inducer will completely counter her Sharp Insult.

You'll have to make the most of debuffs here. HERO'S SMILE skill works wonders to whittle down her damage so that even her critical hits are bearable. OMORI'S TRICK skill is vital to counteract her elevated speed, leveling the playing field so that you can get some actions in before her. AUBREY'S MOOD WRECKER attack deals extra damage to HAPPY foes, which makes for a risk-free damage source throughout the fight. If you're keeping the party SAD, don't be afraid to use up JUICE-restoring items to keep the party fresh. If she lays out enough area attacks, which is likely as two of her attacks hit the whole party, you can build up enough ENERGY to unleash your all-out attacks to end the fight quicker.

A good strategy for this fight is to have OMORI use PAINFUL TRUTH to make himself SAD while still dealing damage to SWEETHEART without turning her SAD (this only applies after SWEETHEART permanently becomes HAPPY, as before that, she will still become SAD if hit by PAINFUL TRUTH). Have KEL use RAIN CLOUD or POETRY BOOKs to make the other friends SAD. Since Sweetheart's best attacks are party-hitting, AUBREY's COUNTER is suboptimal here, so focus instead on using POWER HIT to whittle down her defenses and MOOD WRECKER for massive damage, and rely on HERO's COOK and SNACK TIME for healing. OMORI should be the main damage dealer, constantly using STAB or HACK AWAY on SWEETHEART. If SWEETHEART makes the entire team ANGRY, repeat the process of having OMORI use PAINFUL TRUTH, have KEL start making the team SAD with items, and have AUBREY use TEAM SPIRIT, which turns herself and a friend HAPPY - while this will not give you emotional advantage against Sweetheart, it can be remove ANGRY from two characters in a single action and achieve immediate neutrality against Sweetheart if a RAIN CLOUD is not available. After a few turns, SWEETHEART should be easily defeated.

If the player does not want to use ITEMS, they can consider using AUBREY's TEAM SPIRIT to remove the emotional disadvantage of her and another team member when SWEETHEART uses her signature attack. KEL could be a tank, using CAN'T CATCH ME to further debuff SWEETHEART's accuracy (since KEL's low attack and lowered speed from SAD makes him an ineffective damage dealer). KEL could use JUICE ME on turns that he's not tanking to replenish party members' JUICE, which would be depleted faster due to them likely being SAD.

SPACE BOYFRIEND was SWEETHEART's major love interest after her breakup with ROCOCO. They met at some point after SWEETHEART got her castle, in which they dated for a while before SWEETHEART got bored and dumped him in search of a fresh new relationship. He began being referred to as SPACE EX-BOYFRIEND after the breakup. They got back together after OMORI and friends crashed her love-searching show, SWEETHEART'S QUEST FOR HEARTS, a prompt rejection to her from HERO, and failing to marry herself. SPACE BOYFRIEND then was referred to as SPACE HUSBAND, only for them to divorce less than a day later and SPACE HUSBAND being relegated to SPACE EX-HUSBAND. He isolated himself at the top of SNOWGLOBE MOUNTAIN afterward.

ROCOCO was found by a young DONUT by the name of SWEETHEART. She brought him to her family and they took him in as their own. He and SWEETHEART grew up together. The two fought frequently but SWEETHEART would always win. He became good at running and knew he had to survive to repopulate his species. Eventually, he and SWEETHEART fell in love, became engaged, and moved into SWEETHEART'S CASTLE. But, as SWEETHEART's fan base grew, the two grew apart. When she began searching for suitors, ROCOCO objected so, when he was asleep, SWEETHEART and her servants tied him up and sealed him inside the walls of her castle and he has been wandering through the walls ever since. 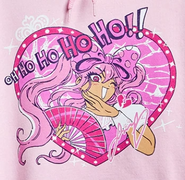