THE ABYSS is a hidden location exclusive to the OMORI ROUTE in OMORI. It is a shadowy realm that houses many dark secrets behind HEADSPACE's existence and perhaps even some of its former residents.

THE ABYSS is the deepest part of HEADSPACE, and as such is the closest area to BLACK SPACE. It notably appears to be populated by numerous variants of SOMETHING. Angler fishes known as the ANGI are present as well, being the only enemies in THE ABYSS not related to SOMETHING.

Skeletons of what seems to be KEL, AUBREY, and HERO can also be found in deeper levels of the area. THE ABYSS also serves as a prison for ABBI, one of the three great creatures, who played the role of "the wisest" before being imprisoned there for committing a crime against the dreamer.

THE ABYSS is accessible on the OMORI ROUTE only, when there is ONE DAY LEFT, after OMORI has absorbed SUNNY and reconstructed HEADSPACE. To access THE ABYSS, head to the west end of the UNDERWATER HIGHWAY that links to DEEPER WELL, and speak to the HITCHHIKER. He will lead you to a very short passageway that holds the Z KEY at the very end.

If you have gathered all 26 KEYS to the HANGMAN puzzle (and most probably with the Z KEY as your final KEY), the game will force open the Hangman menu. SOMETHING then will appear and crash the game. Reopen it, and you will find that the passageway has opened up and you can explore THE ABYSS in full.

Upon accepting the HITCHHIKER's offer to take the party to THE ABYSS, the screen will darken as a lower-pitched version of "BA_roar" plays in the background. The screen will then reveal the location's intro card as the HITCHHIKER has transported himself and the entire party to a long, hollow corridor filled with the HANGMAN Keys you've collected so far. This is known as the ENTRANCE TO ABYSS in the game's data.

The Z Key is located at the end of the corridor. Even if the player obtains it, they cannot progress unless all 26 Keys have been collected. Once you've collected all HANGMAN Keys, this causes the completed HANGMAN figure to be covered by SOMETHING, after which the game will autosave and crash.

Reopening the game will skip the title screen entirely and immediately load the autosave. Collecting all KEYS also allows the party to access deeper segments of the maze within THE ABYSS via a darkish-pink ladder up ahead.

Note that if you choose to kill ABBI post-battle and leave her room, the party will be transported back to this area. In addition, the HANGMAN Keys will vanish from the entrance as ABBI is no longer present. This also means that the HANGMAN menu can no longer be accessed due to these circumstances.

The ABYSS HUB serves as the first proper area of this location. It also introduces the dark, empty atmosphere of this barren location. Waterfall noises and an eerie BGM can be heard playing in the background. The watermelons in this area contain the following items: CHEESEBURGER, WATERMELON JUICE, RAIN CLOUD, and WHOLE PIZZA.

Your primary objective in THE ABYSS is to navigate through its wide-open mazes and find the creature locked away within the area. A single roaming REVERSE MERMAID can be seen running around, though it doesn't possess that much of a threat compared to later enemies.

The only way to proceed is to continue east, then head southeast to reach the next ladder. Enter it to move on to the next area of the maze.

ABYSS LOWER 1 is the second area of THE ABYSS. The BGM notably becomes fainter and the screen slightly darkens to illustrate the cryptic nature of the location. There are a total of two watermelons containing an AIR HORN and CONFETTI.

This is also where you can enter different pathways to certain subrooms by entering a specific ladder. Each one takes the player to different rooms. The only enemies here consist of two SHARK FINS roaming around the overworld.

The ladders all contain differing pathways in general. Taking the bottom left ladder transports the party to one of the isolated rooms in the ABYSS HUB. The watermelon there contains a WHOLE PIZZA.

The only way to progress is to take the top left ladder, and doing so brings the player to the next area of THE ABYSS.

ABYSS LOWER 2 is the third area of THE ABYSS. From here, HITCHHIKER starts showing up occasionally to give players an option to head back to DEEP WELL if they aren't prepared enough. He first appears standing at the far right corner of the screen. A single watermelon located south of the entrance contains a COMBO MEAL.

In addition, more pathways are open for you to access. However, this area and onwards is where shadowy figures begin showing up. These enemies are capable of inflicting the AFRAID emotion on the party, with the exception being OMORI. All of them appear to have a connection to SOMETHING, excluding ANGI.

Multiple LILLIS are roaming around the area; the first FEAR enemies fought within here. They are optional to challenge and do not offer any additional EXP or CLAMS upon defeat. As for the pathways, they consist of three ladders that lead to different rooms:

ABYSS LOWER 3 is the fourth area of THE ABYSS; a series of small rooms that mainly exist to transport the party to the depths of the shadowy chasm. The other rooms can be accessed from the ladders within ABYSS LOWER 2.

A few MERCIS and ANGIS are the only enemies fought there. HITCHHIKER can be interacted with for an option to leave as usual. The watermelons within this area hold three items: LIFE JAM, SPAGHETTI, and S.BERRY SMOOTHIE, all only obtainable via ABYSS LOWER 2's ladders.

As for progressing further, enter the next ladder from the aforementioned room to continue deeper into THE ABYSS.

ABYSS LOWER 4 is the penultimate area of THE ABYSS. Compared to the other areas, it features a large, wide-open maze containing multiple pathways, enemies, and watermelons scattered throughout the area. Instead of having ladders, dark-colored whirlpools resembling the ones from DEEPER WELL serve as portals that take the party further through the dark abyss.

The watermelons here contain the PAPER BAG and BASEBALL CAP charms, WATERMELON JUICE, and a SNO-CONE. Several LITTLE ONES can be seen lying on the floor. Stepping on them creates a strange, moaning sound. Repeat doing this and the creature will slowly vanish, not before saying "Help Me" in a distorted tone.

The most disturbing part about this area is the skeletons hanging on the walls. All seem to bear an uncanny resemblance to what appears to be remains of previous versions of AUBREY, KEL, and HERO from previous adventures.

To progress through this large maze, here are the following whirlpools you can take to either obtain new items or continue deeper into the area's shadowy chasm:

Upon completing these steps, you will finally enter a checkpoint area. It features a few skeletons, MERCIS, and LILLIS. At this point, the only way to continue is by taking the ladder below to face off against of one of the three great creatures, currently stripped of her wisdom and conscience by THE DREAMER himself.

ABYSS FINAL, also known as ABBI'S LAIR, is the final area of THE ABYSS and where ABBI, one of HEADSPACE’s three great creatures resides. The room consists of a dark, shallow lair with a long ladder and ABBI's TENTACLES. One thing to note is that the background becomes more ominous, and the screen darkens to highlight the dark nature of ABBI herself. A dark version of MARI's picnic lies beside the ladder. Use it to save, heal up, and rest. After doing so, continue moving east of the ladder.

Eventually, you will reach a large, disembodied head of ABBI, who opens her eyes to glare at the party. This will initiate an optional boss fight with the outcome determining the bonus content offered. Once defeated, ABBI will apologize profusely and begs OMORI to forgive her. The player can choose to spare her or not.

This is also where a secret BLACK SPACE entrance can be accessed after defeating ABBI. Walk to the right of the shadowy figure and you'll reach a dark wall. Interact with it and OMORI will be transported to the WEATHERVANE AREA, one of the five primary BLACK SPACE 2 areas. This can only be done once. 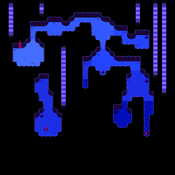 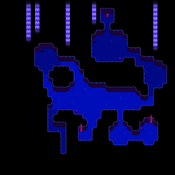 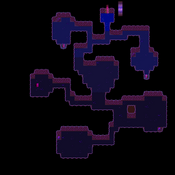 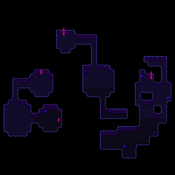 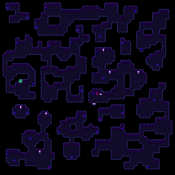