Eternal Dungeon
THE DUNGEON is a location within SWEETHEART'S CASTLE in OMORI. It is a large dungeon where SWEETHEART locks up any of her prisoners for her own amusement. 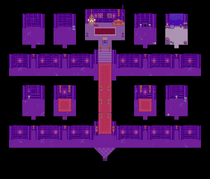 THE DUNGEON is the second mandatory location within SWEETHEART'S CASTLE. This is where the party is taken to after HERO rejects SWEETHEART's proposal to marry her.

From there, the party must find an escape route while exploring the place but they must beware of two new enemies (HAROLDS and MARSHAS) roaming around. Both of them can make for dangerous encounters, so the party must be prepared in terms of stats and weaponry to defeat them.

There are also several jars that AUBREY can smash if the player tags her as the leader of the group. All of them drop TOFU. The player can also find the I letter required for the HANGMAN. This is located in a cell located on the bottom right corner of the screen.

While attending SWEETHEART's show, HERO, KEL, AUBREY, and OMORI are transported here from SPROUT MOLE VILLAGE. ROSA will come laugh at the party for falling for her trap and leaves. Despite this, the group can exit by interacting with their cell door to open it. However, spike squares will prevent the party from exiting the dungeon. Therefore, the player must explore the dungeon to find an escape route to progress.

Pressing various heart shaped buttons will allow the party to access an area below the dungeon, where MARI's picnic is. Pressing more heart shaped buttons here will eventually lower the spikes to the exit, allowing the group to exit THE DUNGEON and enter SWEETHEART'S CASTLE.

The DUNGEON CELLS are used to keep any of SWEETHEART's prisoners locked up. Some of them contain various items and hidden entrances to different areas of the location. The first dungeon cell is the one where the party is thrown into after HERO rejects SWEETHEART's proposal to marry her. It will later be filled with multiple PINK? MOLES after completing THE ROYAL LIBRARY.

The second dungeon cell (located next to the party's dungeon cell) consists of a toilet holding RAMEN, as well as a hidden entrance to the UNDERGROUND DUNGEON. The top center corner reveals the ROYAL BATH, one of the areas where CAPT. SPACEBOY and SWEETHEART spent time together before their breakup. It is also mentioned that the pool must be filled regularly by MRS. FLAMINGO.

The third dungeon, located on the top right corner, reveals three corpses lying around and an entrance to the TORTURE ROOM. The fourth dungeon on the far right is where SWEETHEART locked up CAPT. SPACEBOY as a means of punishment or simply torturing him for her own amusement.

The bottom left corner consists of the fifth and sixth dungeon cells, both containing entrances to the UNDERGROUND DUNGEON. The fifth one has two CONTESTANTS wondering how they'll escape the castle, while the sixth features SMUGGLER JASH, who will sell any of its items to the party.

Lastly, the seventh and eighth dungeon cells are on the bottom right corner. The seventh cell contains various vases that can be smashed using AUBREY's tag ability. Most of them contain TOFU. The eight dungeon cell features one of the many switches that lowers down the spike trap guarding the I letter for the HANGMAN, and BONES, who mentions that he's been stuck down there for a long time.

SPACEBOY'S DUNGEON CELL is where CAPT. SPACEBOY was locked up at some point when he was dating SWEETHEART. The layout greatly resembles the interior of his own house. If the player interacts with MRS. FLAMINGO down below the room, she mentions that SWEETHEART created this room as a "special hell" for SPACEBOY, implying that she abused him in the past.

The most notable features of the room are the jukebox that plays a recording of the SPECIAL MIXTAPE and the telescope right beside it. There is also some dog food left in a bowl. As for the hidden BLACK SPACE entrance, the player must interact with the telescope to activate it. There is a 1/99 percent chance that interacting with it will transport the player to CLOUD WALKWAY. 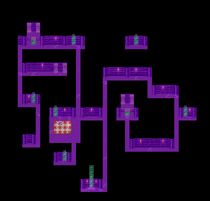 The UNDERGROUND DUNGEON is accessed after the player exits the party's dungeon cell and goes to the cell that was directly next to theirs, open its door then interact with the block of wood that's on the floor to reveal a ladder. From there, the group can find MARI resting beside one of her picnics. The party can heal up, save, or have a picnic with MARI. The ladder above the resting area is where the SMUGGLER JASH is located. It will offer TOFU, JACKS, CHICKEN WING, TASTY SODA, MANGO SMOOTHIE, POETRY BOOK, and LIFE JAM.

In there you'll find another secret ladder leading down. From there, the player can tag KEL, walk up to a pedestal, then use his ability to unlock two specific spike tiles via a button. Move towards the path that leads to the next pedestal to activate another button. The PRISONER MOLE blocking one of the buttons will explode. Get to where it was and press the button this creature was blocking. This will allow the party to progress. One thing to note is that the ladder located south of MARI's picnic connects to the eastern area of SWEETHEART'S GARDEN. 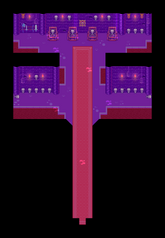 If the party moves east of the first ladder in the UNDERGROUND DUNGEON, this will take them through what seems to be wall, reaching a cell with a SPROUT MOLE hole. Entering that hole allows the group to gain access to the TORTURE ROOM. It is an area containing the skeletons of SWEETHEART's many victims that she executed in the past. The most disturbing feature of the room is the four skeletons up ahead, each strapped to a torture machine. All bear an eerie resemblance to OMORI and friends.

When visiting there the first time, SOMETHING makes a brief appearance in the center of the room before vanishing. From there, the party can encounter four MARSHAS that move slowly. The two watermelons in this area contain LIFE JAM and JAM PACKETS. This is also where the player can obtain OMORI's RED KNIFE weapon by interacting with one of ABBI's tentacles on the bottom left corner. This can only be done on the OMORI ROUTE.

After pushing the buttons that remove the spike traps, this will lead the party to a path that ends in a ladder. Taking the ladder up leads the party to their escape route UNDERGROUND PASSAGE. From there, the party can simply exit THE DUNGEON by heading downwards while breaking the jars using AUBREY's tag ability.

Each one of them will give out random amounts of CLAMS. Heading upwards reveals a large button that unlocks the spike tiles around the player.

Full map of the Dungeon. 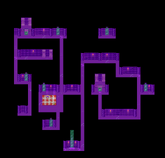 Full map of the Torture Room.