THE HOOLIGANS is an enemy in OMORI. They are a group of delinquents that serve as minor antagonists for the REAL WORLD segments.

THE HOOLIGANS consists of their leader AUBREY, KIM, VANCE, ANGEL, CHARLENE and THE MAVERICK. They usually tend to cause trouble around the streets of FARAWAY TOWN but all members are actually good-hearted people when getting to know them better, as noted by KEL himself.

This is evidently shown on ONE DAY LEFT and an official comic, where all members genuinely care about AUBREY's well-being and make sure she feels comfortable around them on her birthday. Interacting with each member on that same day reveals that they don't seem to harbor any grudge towards SUNNY or KEL, despite attempting to fight them on THREE DAYS LEFT.

THE HOOLIGANS appear in FARAWAY PARK, along with BASIL. BASIL asks KIM to ask someone else to give something back, but KIM calls him a creep. KEL intervenes, but the rest of THE HOOLIGANS arrive. KEL and AUBREY get into an argument over BASIL, which leads to the latter attacking the former. SUNNY, however, reveals himself to have a knife, which causes THE HOOLIGANS to retreat.

After SUNNY and KEL learn that AUBREY took BASIL's PHOTO ALBUM, they fight all the members of THE HOOLIGANS, minus AUBREY, to obtain AUBREY's location, which they eventually get from KIM. The duo then confront AUBREY a second time, but AUBREY tearily runs out of the CHURCH once the churchgoers start gossiping on her history, as well as her delinquency. SUNNY and KEL witness AUBREY throw the PHOTO ALBUM into her trash, which they then obtain.

In the evening, ANGEL, CHARLENE, and THE MAVERICK go to the HANGOUT SPOT, with THE MAVERICK challenging KEL to a race and then losing. KIM and VANCE eat dinner at their house, with KIM loudly telling SUNNY and KEL to leave if they knock on her door.

On TWO DAYS LEFT, THE HOOLIGANS are seen in GINO'S, discussing plans to go to their hangout spot, later revealed to be the same one where SUNNY, MARI, KEL, AUBREY, BASIL, and HERO used to go to. THE HOOLIGANS then head over to the HANGOUT SPOT in the evening and find BASIL there as well for unknown reasons. They attempt to force BASIL to leave but this leads to the latter to cry out loudly for help. SUNNY and KEL arrive at the spot, and while KIM claims they did nothing to BASIL but try to verbally force him out, KEL doesn't believe them and attempts to stop them as usual.

AUBREY then decides to fight the two, this time with the HOOLIGANS backing her up. A fight ensues, and it doesn't matter if the player wins or loses. Either way, KEL tells AUBREY that even though she spends more time with her new friends, she still comes over to the old hangout spot, meaning she still cares about her old friends. This causes AUBREY to back down in silence. Having enough of constantly tormenting BASIL, the HOOLIGANS exit the secret hangout spot, leaving AUBREY alone with her former friends.

AUBREY then emotionally breaks down, accidentally pushing BASIL into the lake. While KEL argues with her, SUNNY unsuccessfully attempts to save BASIL. Luckily, HERO hears the commotion, and saves both from drowning. After retrieving the two, the group leaves, leaving AUBREY alone there.

KIM, CHARLENE, ANGEL and VANCE can later be found in their rooms, while THE MAVERICK can be found outside his house.

THE HOOLIGANS arrive at AUBREY'S HOUSE to hang out with her, but are concerned by her lack of response, as well as her refusal to exit her house. KIM decides to ask KEL, HERO, and SUNNY for help, and while KEL expresses reluctance, HERO convinces them to go there. Once there, they successfully convince AUBREY and KEL to make up, as well as persuade her to return the stolen photos from the PHOTO ALBUM. AUBREY then exits the house, but tells the rest of THE HOOLIGANS that she'll hang out with them later. AUBREY then hangs out with SUNNY, KEL, and HERO for the rest of the day. At the treehouse, she tearily apologizes for her actions, upon which the group comforts her with a group hug. They then go to BASIL'S HOUSE so AUBREY can apologize to him, but end up staying the night.

ANGEL can be found at HOBBEEZ when he was supposed to be running errands for his older sister, who punishes him once the group convinces him to return home. KIM and VANCE can be found at SEAN and KAREN's party, with KIM reassuring SUNNY about moving. THE MAVERICK reconsiders returning to baking, while CHARLENE admires the flowers at the garden section of FIX-IT.

Once SUNNY is rushed to the hospital, THE HOOLIGANS are some of the people that leave flowers for him.

*Like many other FARAWAY enemies, THE HOOLIGANS will prioritize KEL as the first target before attacking SUNNY (Highest AGI).

**When brought down to 15% HP, they will resort to attacking together for the remainder of the fight, dealing massive damage to both SUNNY and KEL.

*Only used if HP reaches 15% of their maximum HP.

The easiest way to defeat them is by using PEPPER SPRAY, which will KO them. Trying to fight them without the PEPPER SPRAY will cause a very long battle (at least 50 turns long), and at 15% health they will unleash a desperate final stand where everyone attacks at the same time, dealing tons of damage.

It is notable that they collectively have an extremely large health pool that makes it quite difficult to beat without the use of PEPPER SPRAY. Although they are six enemies, they all share one health pool and only attack one at a time, except for one occasion when they are at 15% health, when they will attack multiple times in one turn. 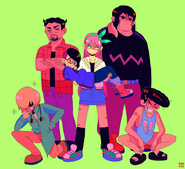 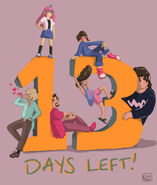