TOWN AREA, also known as NEIGHBORHOOD[1], is one of the many locations found within BLACK SPACE in OMORI. It is the fourth mandatory area the player must progress through to complete BLACK SPACE. 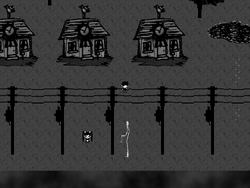 A grey world resembling a town with several rows of buildings. Up north features a hanged MARI among telephone wires and various tombstones. Many shadowy figures resembling some of the people SUNNY remembers from his childhood roam around the place. The objects here also includes a crudely drawn deer, a fridge, and bathtub. One of the scrapped characters MEIDO can also found at the bottom of the map, only on ONE DAY LEFT of the OMORI ROUTE.

Interacting with a specific tombstone will transport OMORI to the DEVELOPER ROOM. Interacting with every grave will give you the R.I.P. achievement. The key is directly south from where you start, along with another optional STRANGER encounter.

Each house can be interacted with. For most houses, this simply rings a doorbell and does nothing, but there are four houses with special properties. One house in this area has its clock hands upside down; this is the only house that can be entered (see MARI'S HOUSE below). One house causes HELLMARI to appear and shriek upon interacting with it, after which its doorbell cannot be rung again. Additionally, there is one house whose doorbell makes a strange "vwoop" sound, and one whose doorbell is instead located on the left window.

This area can be revisited at anytime through entering another sub-area from BLACK FOREST 2, a BLACK SPACE 2 location.

After finding a BLACK KEY within the SCRIBBLE AREA, OMORI is warped back to the center hub of BLACK SPACE. From there, OMORI enters another door, which leads him to an desolate town filled with rows of houses and a gloomy atmosphere. Regardless, OMORI can explore the location by interacting with rows of houses to discover any special event that plays out.

Right near the pond is where STRANGER is waiting for OMORI. Talking to him there is optional. If interacted with, STRANGER will tell OMORI that when he hid away the truth within BLACK SPACE, a part of him was sealed away too. STRANGER also notes that a young boy has waited for a long time for someone to save him.

STRANGER ends his dialogue before vanishing by questioning which memory was more painful on "that day": when OMORI became "nothing" or him "being split in half". Right below the pond is where the key is located. After collecting the key, several RED HANDS will spawn and interacting with them will take OMORI back to the center hub of BLACK SPACE.

DEVELOPER ROOM is a hidden location in this area. It is is connected with the TOWN AREA by interacting with a tombstone with a different design compared to ones shown in this area (shown to the right). Upon entering the room, there are twenty graveyards shown, each representing the developers of the game.

In addition, a slowed-down version of the song played by both GIBS and MICHAEL is faintly heard in the background. Interacting with all of the tombstones will grant you the R.I.P. Achievement. If the player wants to return to the TOWN AREA to resume progress, walk off in any direction to exit room. This room can revisited as many times possible as long as the player is still in the TOWN AREA. 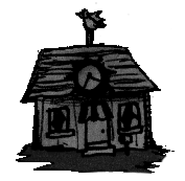 You can enter a peculiar-looking house titled WINDOW HALLWAY[2] from the TOWN AREA, specifically the fourth house on the right with an upside down clock, on the third row from the bottom. Remember that the world loops horizontally, so if you ever get lost, look for the main vertical road and start from there.

Inside the house, there is a painting of MARI on the wall, with her hair completely obstructing her face. After you interact with it, she will leave the painting and harmlessly start following OMORI around. Once the creature steps out of the photo frame, the player can trigger a rare "Fear Polaroid" near the object.[3] There is also a cake sitting nearby that you can eat, causing a short scene where your molars fall out of your mouth. The background also features multiple hanging MARIs from the FISHBOWL AREA.

By the window, there is a trigger that would teleport you to an unused room titled ROOM WITH SELF, but it is deactivated and therefore inaccessible. The room is also not entirely finished, confirming it was cut from development rather than a bug that was never fixed.

In the room, you lose control of OMORI, but gain control of a pair of "eyes" that float around instead. You cannot leave the room or otherwise progress until you position the eyes inside of a ghastly OMORI's face, similar to the one in the mirror jumpscare. Once doing so, the room fades to black and you are teleported back to MARI'S HOUSE.

ROOM WITH SELF is fully functional besides the fact that you are trapped within a 1 tile box in front of where OMORI's nose is located. Assumedly, this is to prevent OMORI from moving somehow and ruining the effect, but because of this you cannot move the eyes into the proper position. Using no-clip, it is possible to still complete the event. 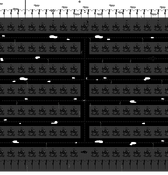 A full view of the Town Area with no background. 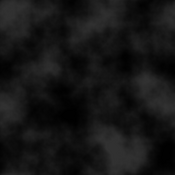 The background used for the Town Area.

A full view of the Developer Room.

A full view of the Window Hallway.

One of the hanged Maris from the Town Area. 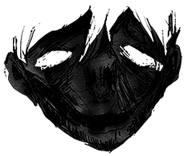 The texture used for the unused Room With Self Map. 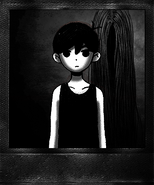 The Fear Polaroid that appears within the Window Hallway.