TRAIN STATION is a location found within the west area of VAST FOREST in OMORI. It is VAST FOREST's local train station connected to ORANGE OASIS. 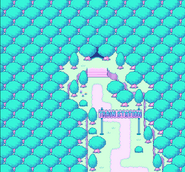 The train station can be accessed through VAST FOREST. During the prologue, the station is filled with characters waiting in line for the train. MR. OUTBACK prevents OMORI from walking close to the train and LEMON JASH doesn't allow the group to budge and get a lemonade.

There are also various characters that OMORI and friends can interact with. It is until after completing the PROLOGUE by defeating SPACE EX-BOYFRIEND shall this area become almost entirely empty. This also means that the party is able to board the TRAIN to ORANGE OASIS by using the TRAIN PASS from CAPT. SPACEBOY himself.

An unused line from the NPC known as MEGAPHONE reveals that there were originally more trains that used to run through the forest but currently there is only one train available for denizens to use.[1]

The TRAIN STATION from the demo. 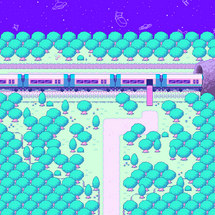 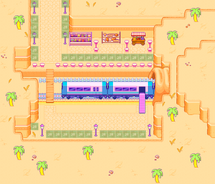