TREEHOUSE is a location in OMORI. This is SUNNY's old treehouse that he and his friends built four years ago. It is currently abandoned and decayed.

The TREEHOUSE can be accessed by entering through a clearing north of the backyard of SUNNY'S HOUSE. It is made of wooden planks and placed on top of a large tree.

The interior of the TREEHOUSE is now rusty and abandoned, mainly due to the group not using it for four years after MARI's death. Its design in the past reveals that it used to be full of life, making it a place where the group can relax peacefully. There are also a few vines wrapped around the wood and many of its decorations are decayed in terms of design and color.

These objects all used to belong to the main characters. Some of them include AUBREY's MR. PLANTEGG, HERO's old cookbooks, and MARI's old softball bat. This is also where the last missing photo of the PHOTO ALBUM is located.

The TREEHOUSE was built by SUNNY and his friends fours year before the game's events. The friend group would usually use this place for relaxing and playing card games. They also planned to use it more often once next summer came. However, the TREEHOUSE was abandoned since the group fell apart due to MARI's death.

Ever since then, the TREEHOUSE became more discolored and moldy as time passed on. Despite this, during his four years as a hikikomori, SUNNY would use the TREEHOUSE as the basis for NEIGHBOR'S ROOM, a colorful area where he could visit imaginary versions of his friends as OMORI in HEADSPACE.

It would also be used for the creation of NEIGHBOR'S BEDROOM whenever OMORI needed to reset HEADSPACE to repress any fragments of the truth regarding MARI's death.

The TREEHOUSE only becomes available on in the evening of ONE DAY LEFT. After entering SUNNY'S HOUSE and reflecting back on the past, the group decides to revisit their treehouse. Upon entering, SUNNY, KEL, HERO, and AUBREY will reminisce on old memories, and find the missing photo from the PHOTO ALBUM. AUBREY will then become overcome with emotion, and runs out of the treehouse. 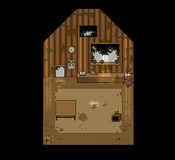 (8/14): Ta-da! All summer, we've been working on a treehouse in SUNNY's backyard and today it's finally finished! HERO and his dad did most of the heavy work, but AUBREY and I made paper plants to put in the window still!

(8/16): All of us hanging out in our brand new treehouse! Looks like SUNNY is finally reading the book I showed him! I want to spend every day in here, but it's a shame that summer vacation is almost over. I hope we get to use this treehouse more next summer!

(9/6): I'm playing cards with KEL, HERO, and AUBREY. They're so easy to read. They can't hide anything on their faces! MARI baked everyone cookies from scratch. They were chocolate chip and super delicious, like always!