This article is about the UNBREAD TWINS. For the character pages, see DOUGHIE and BISCUIT.

The UNBREAD TWINS are an optional boss in OMORI. They consist of DOUGHIE and BISCUIT, two eccentric twins that guard ORANGE OASIS[1] while continuously making bread for all eternity within the BREAVEN.[2][3]

The UNBREAD TWINS can be found in BREAVEN, an underground dungeon filled with loads of bread. Their only purpose is to bake "fresh bread" for eternity, and they have been doing so since the inception of the universe.[4]

The sister is named DOUGHIE, and the brother is called BISCUIT. While DOUGHIE is capable of normal speech, BISCUIT converses only by saying "oho". Although they express being discontent with their role of baking fresh bread, they appear resigned to it.

An NPC known as SERENO mentions that the UNBREAD TWINS also have the power to raise the dead, most likely referring to many bread creatures the player encounters in ORANGE OASIS, such as the BREAD KIDS and the GINGERDEAD MAN enemies.

They are seen baking "fresh bread" in the shape of humans, and teleporting them away. Upon noticing OMORI and his friends, they attack them thinking that the fresh bread has come back for revenge. Throughout the battle, they mourn their situation of being trapped in a neverending cycle.

After being defeated, they realize the player was not attempting to harm them, and are eventually convinced to leave BREAVEN to see the outside world. Their defeat grants the player the Ohoooooooooo... ACHIEVEMENT. They can later be found in LAST RESORT, resenting the loss of all their CLAMS through gambling.

*This skill can only be used if there aren't three enemies in battle. If not, it'll be skipped.

Additionally, they will do the following actions as their heart gets lower. Note that UNBREAD TWINS's AI during their DEPRESSED and MISERABLE states is identical to their SAD A.I.:

*This skill can only be used if there aren't three enemies in battle. If not, it'll be skipped.

The UNBREAD TWINS have an enormous HEART pool that is reinforced by their mounting SADNESS throughout the fight which reduces the damage they take. They have the ability to make their own food and heal themselves, so expect a very long fight. You may want to accumulate recovery items from DINO'S DIG before entering BREAVEN.

As the battle progresses the TWINS initially become SAD at 80% HEART, DEPRESSED at 50% HEART, and MISERABLE at 25% HEART. At that third stage, all damage you do drains their JUICE instead, so you're practically forced to drain out their JUICE in order to finish off the rest of their HEART. It can become daunting if, during this time, they heal themselves, but if they've healed several times before this point, it's likely their dwindling resources has weakened their healing to less intimidating levels.

Despite the persisting effects of SADNESS, the TWINS can still hit hard enough to warrant at least two layers of debuffs for suitable damage mitigation. It doesn't help that their regular attacks are two-hit, which can threaten to TOAST anyone at middling levels HEART. OMORI's TRIP FOLLOW-UP or STARE could help to lower UNBREAD TWINS' speed, which could allow HERO to outpace them and heal a party member before they attack. Make use of ANGER to give yourself an advantage -- KEL's ANNOY and MEGAPHONE are great ways to establish it, and if you wish, you can push your party members into ENRAGED territory for a greater attack bonus. Expect to use AUBREY's HEADBUTT a lot, or even OMORI's STAB skill to bypass the TWINS' defense boost. Also, OMORI's SHUN can be used to reduce UNBREAD TWINS' defense. When facing off only against UNBREAD TWINS, OMORI's HACK AWAY would deal close to the same damage as FINAL STRIKE, which could potentially make it more desirable due to the lower JUICE cost.

Every now and then they can call in support by pulling copies of BUN BUNNY, CREEPYPASTA, LIVING BREAD, SLICE, SESAME, or SOURDOUGH out of the oven. These variants aren't so tough -- a few area attacks should be sufficient to defeat it. Note that BUN BUNNY, CREEPYPASTA, and LIVING BREAD only appear before ONE DAY LEFT, while the BREAD KIDS appear on both battles on both DAYS.

Since the TWINS use two-hit attacks a lot, expect to accumulate a lot of ENERGY throughout the fight. Their high HEART pool makes it so they can easily withstand a few RELEASE ENERGY attacks, so don't expect it to be the finishing blow unless they are on very low health. 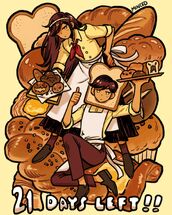 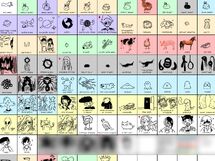