VAN is a character and NPC in OMORI. He is one of the many residents of the FOREST PLAYGROUND, often looking after those younger than him and hanging around BERLY.

VAN is a huge light-green monster with purple spiky hair curved into a style resembling devil horns. He notably towers over all of the playground residents, including SHARLEEN and BOSS. He has a pair of thick eyebrows, rosy cheeks, and two upward-pointing fangs.

VAN's most notable feature is the multiple pieces of candy stuck to his back, which represents his huge love for candy. His appearance stems from VANCE, his REAL WORLD counterpart from FARAWAY TOWN.

VAN is shown to be a soft-hearted, warm individual who is always seen looking after the younger residents of the playground. He is usually friendly around others, and willingly does whatever BERLY tells him to do, ensuring her happiness in the process. As long as BERLY is happy, VAN himself is happy regardless of the many antics she puts him through.

He also appears to have a strong friendship with BERLY, often spending time together to the point of being inseparable. A scrapped line reveals that this extends to admitting he misses BERLY's presence during his time at the LAST RESORT as a construction worker.

Another unused line of dialogue reveals that VAN understands that spending more time with BERLY is what made him understand her better beneath that rough attitude she possesses.

OMORI and his friends first encounter VAN playing tetherball with BERLY in VAST FOREST's playground. After meeting up with MARI and BASIL, the group decides to visit BASIL'S HOUSE to see BASIL's new seedlings. However, they end up getting roped into BERLY's game of hide-and-seek alongside most of the playground residents.

During that segment, VAN hides behind a tree right next to HAPPY, who hides herself inside JOKER JASH's jack-in-the-box. When caught, VAN mentions that despite not having that many spots to hide in, he still had fun as long as BERLY is happy. He then joins the other participants that were caught before.

VAN also witnesses the group's brief scuffle with BOSS, who attempted to take over the playground for himself while using BASIL as a hostage. After BOSS's defeat, VAN resumes playing tetherball with BERLY.

Later on, he accidentally sends the tetherball flying far away from the playground by using his arms too hard. When starting the LOST BALL sidequest, VAN tells the group to let BERLY join them temporarily until the tetherball is found. He also checks on a commotion which was caused by BROWS running over BANGS, and tries calming HAPPY down.

After the group completes the sidequest, BERLY will teach AUBREY the HEADBUTT skill using VAN as a target, and gives her a BUTT CERTIFICATE as a token of gratitude. AUBREY can also gain an additional 50 JUICE by talking to BERLY and using her bat to smash VAN after learning the tag mechanic at the JUNKYARD.

Upon returning to HEADSPACE, OMORI discovers that all of his friends from the playground have gone missing, apparently being tricked into signing CONTRACTS given by MR. JAWSUM to work at the LAST RESORT.

VAN appears on the fourth floor's construction site alongside NEB, CRUSHER BLAST, and several GATOR GUYS. He can be seen working on a project regarding a two-hundred-story skyscraper. When spoken to, VAN mentions that since he was too soft-hearted to do the job of a bouncer, BERLY was given the position instead since she has a stubborn attitude and a hard head.

After saving BASIL within BLACK SPACE and resetting HEADSPACE back to its original state on the OMORI ROUTE, the group can return to the LAST RESORT once again.

VAN is still located at the casino's construction site when returning to the area. After speaking to MR. JAWSUM for the last time, HERO becomes the new owner of the casino as the former retires. This will lead to many of the casino's workers and visitors leaving the place.

VAN and the other playground residents soon return to their place at the VAST FOREST. He can be seen playing tetherball with BERLY like he usually does. Interacting with either him or BERLY will prompt the same dialogue mentioned in the previous segments.

Van as he appears in the Last Resort. 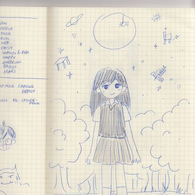 Van in one of the concept arts.