VANCE is a character and enemy in OMORI. He is one of the six members of THE HOOLIGANS and the older brother of KIM.

VANCE is a teenage boy who wears a red flannel over a black t-shirt. There is a bunch of candy in his flannel pocket, and a lollipop in his mouth. Like his sister, he has amber colored eyes and looks older than some of the other HOOLIGANS with a beard, vellus hair on his arm, and chest hair.

VANCE is shown to be rather gruff and blunt at times when dealing with new people. He often tends to support his sister KIM in anything she plans to do, mostly to make sure she feels happy. Despite his menacing appearance, VANCE holds no grudges against anyone that his sister confronts and actually possesses a kind heart deep down.

Despite their different demeanors, VANCE and KIM both share a love for candy, to the point of repeatedly attempting to shoplift the candy store to get their fix. Taffy in particular is one of their favorites, and becomes a deal breaker when KEL tries to bribe them with a big bag of candy.

VANCE was born to his unnamed mother and father with his sister KIM, who born a year later, for an unknown amount of years prior to the game's storyline. At some point in his life, VANCE became a member of THE HOOLIGANS, which consisted of himself, KIM, ANGEL, CHARLENE, and THE MAVERICK. The group would later gain a new member in the form of AUBREY, who eventually became their new leader as well.

SUNNY and KEL can first encounter VANCE and the rest of THE HOOLIGANS riding their scooters down the lower street in FARAWAY. When KEL attempts to stop KIM from bullying BASIL at FARAWAY PARK, VANCE and the other HOOLIGANS arrive to witness the commotion. The group watches AUBREY attempt to beat down SUNNY and KEL but end up backing off once they notice the wound AUBREY received from SUNNY cutting her with a knife.

Upon learning that AUBREY stole BASIL's PHOTO ALBUM afterwards, SUNNY and KEL head off to interrogate the HOOLIGANS for AUBREY's whereabouts. After facing ANGEL, CHARLENE, and THE MAVERICK to find information about where AUBREY went, SUNNY and KEL meet KIM and VANCE at the candy shop in OTHERMART. The two of them are caught stealing to satisfy their addiction and almost leave empty handed until KEL attempts to bribe them with candy he bought after they were kicked out.

This results in a battle for them to get the candy and leave, or be forced to tell SUNNY and KEL where AUBREY went. Regardless if the player wins or loses, KIM will tell the two that AUBREY went to the CHURCH. In the evening, KIM and VANCE return to their mother's house to eat dinner with her.

The next day, VANCE and the HOOLIGANS are seen eating pizza at GINO'S, with AUBREY ignoring SUNNY and KEL's presence silently. The HOOLIGANS later heads over to HANGOUT SPOT and finds BASIL there as well for unknown reasons. They attempt to force BASIL to leave but this leads to the latter to cry out for help. SUNNY and KEL arrive at the spot, and KEL attempts to stop them as usual.

AUBREY then decides to fight the two once again, this time with the HOOLIGANS backing her up. A fight ensues, and it doesn't matter if the player wins or loses. Either way, KEL tells AUBREY that even though she spends more time with her new friends, she still comes over to the old hangout spot, meaning she still cares about her old friends. This causes AUBREY to back down in silence.

Having enough of constantly tormenting BASIL, the HOOLIGANS exit the secret hangout spot, leaving AUBREY alone with her former friends. VANCE can be later found in his shared room with KIM, watching his sister worrying over AUBREY. If interacted with, VANCE tells KEL and SUNNY about his real demeanor deep down despite his gruff attitude at times.

VANCE and the other HOOLIGANS notice that AUBREY isn't coming out of her home. This worries them greatly, which leads to KIM heading over to SUNNY'S HOUSE to ask SUNNY, KEL, and HERO for help. HERO agrees to go help AUBREY as he wants his friends to be fully reunited for real. The group leaves SUNNY'S HOUSE and find the HOOLIGANS all standing outside of AUBREY's house, waiting for her to come out.

After comforting AUBREY and retrieving the PHOTO ALBUM along with the missing photos of MARI, the group leaves the dirty home. AUBREY apologizes to the HOOLIGANS for worrying them. She tells them that she'll be spending time with her old group of friends for the remainder of the day. VANCE is later found at FARAWAY PARK with KIM, discussing about their father inviting them to an upcoming party at COUPLE'S HOUSE, much to the former's excitement.

In the evening, VANCE spends time with his father at the party by eating food with him. This event will only occur if the player manages to interact with SEAN and KAREN on the morning of THREE DAYS LEFT, and helping them prepare the dishes in the morning.

Sometime after SUNNY manages to overcome OMORI within his mind, the HOOLIGANS are one of the many who leave behind flowers for him in the HOSPITAL.

*Like many other FARAWAY enemies, VANCE will prioritize KEL as the first target before attacking SUNNY (Highest AGI). 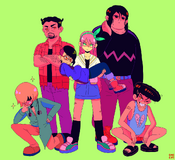