WHITE SPACE is a location in OMORI. It is the room/area in which OMORI primarily lives/exists alongside his pet cat MEWO. WHITE SPACE is also known as the opposite variation of BLACK SPACE.

OMORI starts off inside of WHITE SPACE. A LAPTOP, SKETCHBOOK, TISSUE BOX, LIGHTBULB, DOOR, and MEWO are immediately in view. Everything is bright white; there aren't any walls. A black lightbulb hangs from the ceiling. There's a floor but it's always cold.

Traveling outside of the room in WHITE SPACE spawns RED HANDS that will follow OMORI. Coming into contact with a RED HAND or with the outer extremities of WHITE SPACE will cause the game to fade out and send the player back to the center of the room.

After the death of MARI four years ago, SUNNY's repression of the truth began with the creation of WHITE SPACE, as well as his alter ego OMORI. The BRANCH CORAL from DEEPER WELL describes it as "an emptiness, a home without warmth. A place to survive, but not to live." Serving as the one constant of the HEADSPACE (if one can even call it part of the HEADSPACE), WHITE SPACE serves as a safe-if-sad place for SUNNY/OMORI to escape from harsh reality and responsibility.

SUNNY's desire to keep himself safe via escapism became strong enough to create an imaginary world known as HEADSPACE. From there, SUNNY could relive happier times with the dream versions of his friends while exploring HEADSPACE on every occasion.

The only thing that ever changes is the LIGHT BULB, a curious object filled with pitch-black darkness instead of light. If a lit lightbulb represents "the birth of an idea", then a black lightbulb is "the repression of an idea" -- it serves as a visual metaphor of SUNNY's repression of the truth, and its darkness pulses stronger the more the truth begins to leak out in the HEADSPACE, often in the form of SOMETHING.

WHITE SPACE is where SUNNY takes on the form of OMORI to explore HEADSPACE, and for much of the game this and its nature as a safe place are the only purposes WHITE SPACE serve for the plot. However, even after SUNNY manages to find a short lived peace, his mind continues to plague him with reminders of the truth. But as the game nears its end, WHITE SPACE gains more significance.

The game opens with OMORI standing in WHITE SPACE. He checks his laptop, sketchbook, tissues, and talks to MEWO before hearing "Something fell nearby." He then finds a SHINY KNIFE, which he can equip as his default weapon. The door to the NEIGHBOR'S ROOM, and by extension, the rest of HEADSPACE can be opened, starting OMORI's adventures with his friends.

As OMORI reaches points in his adventures that bring him uncomfortably close to the awful truth, he will be abruptly pulled back into WHITE SPACE with no companions or any way out, and the LIGHT BULB will pulse with more darkness. The only way forward is to pick the STAB option to force SUNNY to awaken.

In most cases, the player takes control of OMORI while entering WHITE SPACE. After SUNNY has reconnected with all of his friends in FARAWAY and found the strength to face his fears, the player is suddenly controlling SUNNY within WHITE SPACE while a separate OMORI watches and shows no apparent desire to fuse with SUNNY this time.

With no door to HEADSPACE present in this case, the only option is to inspect the LIGHTBULB. Feeling ready to confront the truth, SUNNY smashes the LIGHTBULB on the floor and ends his repression, to the shock of OMORI -- SUNNY is then expelled from WHITE SPACE and thrown straight into BLACK SPACE, where he has his final confrontation with SOMETHING.

Following his ill-fated meeting with BASIL in reality, and after reliving his favorite moments through MEMORY LANE, SUNNY finds himself within WHITE SPACE again. What few objects were within WHITE SPACE before are gone, leaving only the border of the room, the cord that used to hold the LIGHTBULB, and OMORI himself who stares at where it used to be. As OMORI turns to face SUNNY, the border and cord vanish, leaving only SUNNY and OMORI in an empty white void as the two begin to fight for control over SUNNY's mind.

If SUNNY falls but fails to persevere, OMORI takes control of SUNNY's mind and finds himself in WHITE SPACE once again. He leaves for the NEIGHBOR'S ROOM again, but his adventures are cut short as he has seized control of SUNNY's body and hurls himself off the hospital balcony.

If SUNNY perseveres, he falls into OMORI's arms while the latter fades away. SUNNY, with his newfound strength, takes one final bow as he leaves WHITE SPACE and prepares to come clean with his friends.

SUNNY chooses not to save BASIL and resume sleeping in his own bed, this leads to a repeat of the WHITE SPACE intro scene from the start of the game. OMORI appears in WHITE SPACE as normal, but there is no door to HEADSPACE and the light bulb is still missing. All OMORI can do is STAB himself to wake SUNNY up.

If SUNNY picks up the knife on the kitchen counter before heading to bed, using the STAB option in WHITE SPACE as OMORI will cause the resulting effects to impact SUNNY's physical body.

Should SUNNY completely ignore the real world outside of his house on all three days, they will have no desire to find the truth, and thus OMORI will have no reason to be hostile. SUNNY is accosted by SOMETHING as he sleeps, but OMORI saves him and they fuse -- this time permanently as OMORI takes full control of SUNNY's mind.

WHITE SPACE in this case has a couple of subtle changes. The laptop screen now reveals the PIANO ROOM of the LOST LIBRARY, and a RED HAND appears in front of the white door leading to HEADSPACE. Interacting with it allows OMORI to learn a very powerful skill, known as RED HANDS. The LIGHT BULB's pulsing also continues to cease, reverting back to its original state as shown in the PROLOGUE. 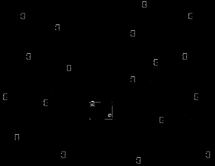 Sunny waking up in White Space, only seen on One Day Left of the Sunny Route.

Something lurking in White Space, only seen on Two Days Left.

White Space items from the 2014 Trailer. 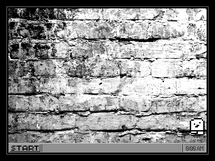 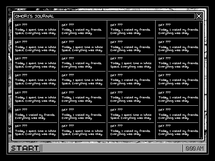 The journal as shown from the laptop. 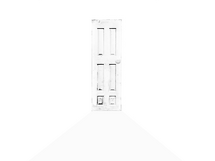 The screen that is shown when interacting with the white door.

The screen revealing the Piano Room of Lost Library, exclusive to the One Day Left segment of the Omori Route.

Omori's idle animation when doing nothing for two minutes.